Shock, awe and minds going black – all the reactions you would expect if you had just won the lottery 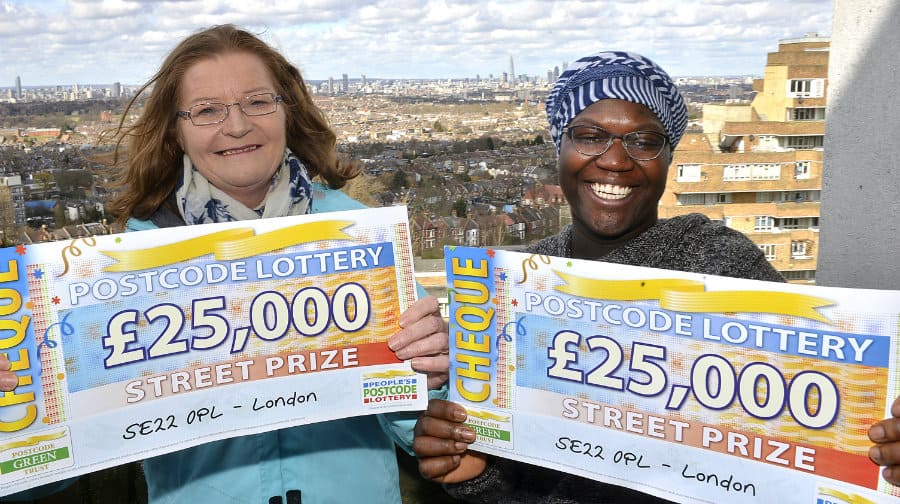 Two lucky East Dulwich residents won £25,000 each on Saturday after their street came up in the People’s Postcode Lottery, writes Alex Yeates.

Brenda Mackey, 48, and Fatima Kallon, 26, both scooped the jackpot as SE22 0PL was drawn in the weekly game.

The welcome windfall was presented to the pair by People’s Postcode Lottery Ambassador, Danyl Johnson.

Brenda said: “The moment I found out I’d won £25,000 I was in shock – my mind went blank. When I took the cheque out you could knock me down with a feather – I’m still gobsmacked. Our daughter is going to university in September and that is very expensive so it will be very helpful.

“People’s Postcode Lottery supports so many different charities and this way I can support the charities that I’d like to help.

“Out of the whole postcode – only two of us won. I’d like to tell people simply start playing. It can happen to anybody, even if you sit there and think it won’t – it does and I’m the proof.”

For one £10 ticket, players can win prizes everyday of the month with the money raised going to a number of charitable causes.

Fatima, who has been playing for less than a year, said: “When Danyl pulled out the £25,000 cheque I couldn’t believe it. I don’t even know how to explain the feeling – it was such a lovely surprise.

“This money is going to be very useful for my family. The first thing I am going to do is book a nice holiday with my kids.”

The lottery has raised more than £108.9 million for good causes around Great Britain and internationally since it started in 2005 with a minimum of 27.5% of ticket prices going to charity.

The money raised is given to grant-giving trusts such as Postcode Earth Trust and Postcode Children Trust. Recently Carers Lewisham received £3,860 from the lottery to give unpaid family carers health and wellbeing days.