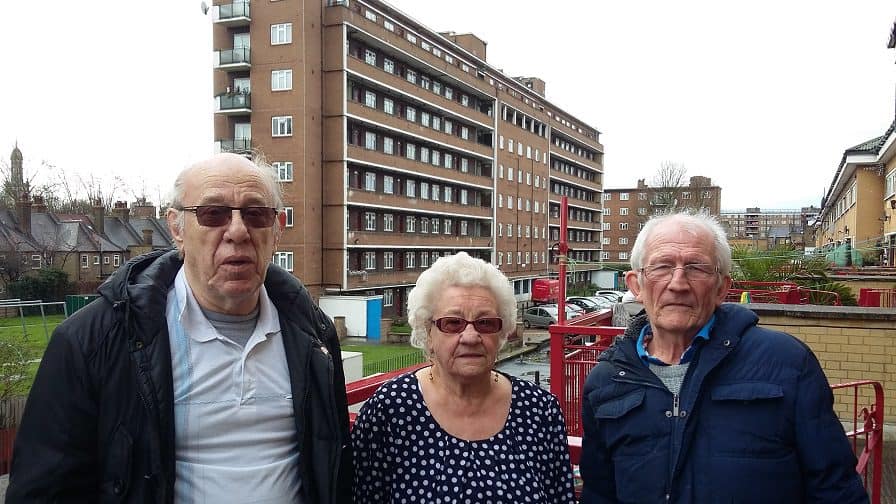 Joyce Markham, centre, with Bronti Close neighbours kicking off about traders below their homes

An elderly woman living on East Street is demanding the council clamp down on butcher shops that ‘make her life a nightmare’ with early-morning deliveries.

Joyce Markham, 81, says she has raised her children and even looked after her father in the council flat above the market, where she has lived since 1966.

But her sleep has been disturbed every night by lorries and vans picking up rubbish and delivering meat to the butchers, J&J Butchers & Grocers in unit 90. “There’s so much noise going on,” said Joyce. “The shops have always been here, but I never had to put up with as much as this.

“On Tuesday night at 10.15pm there was a lorry collecting cardboard boxes and he didn’t leave until gone 12pm.

“Then another one came delivering chickens. Then at 3.40am there was another one picking things up.

“I sometimes go to the window and just watch what they’re doing, because I can’t sleep. My daughter goes down there and asks them to stop, and they don’t take any notice.”

Her neighbour, Danny Moyse, was a former market trader in 1984. Danny has a bone to pick with the council, who have admitted to him that units 76, 78, and 80, had noisy extractor fans outside his window without planning permission.

Danny first complained to the council in July last year, and they confirmed to him that one of the shops is being investigated, but he is still waiting for anything else to be done.

The owner of Kingsland Butchers (unit 78) told the News the property already had fans installed before he started operating there in June 2016 when he signed a lease with the landlord, Southwark Council. He also confirmed that a retrospective planning application had been submitted, as requested by council officers.

Danny said: “They have vents for their refrigerators on the roof and they make a noise 24/7.

“The council just told me to keep my doors and windows shut. They came round in the day time and told me it wasn’t that noisy, but obviously it’s different at night and you’re trying to sleep.

The businesses in units 76 and 80 did not respond to the News’ request for comment.

Johnson Situ, Southwark’s cabinet member for business, culture and social regeneration, said: “It can be difficult when the needs of local businesses seem to be incompatible with local residents and the council is doing what it can to try and find a way forward. Food safety officers have visited both businesses and are happy that the premises are safe and clean.

“A letter is being prepared for both businesses outlining what improvements can be made and both premises will continue to be monitored to make sure they are complying with these and the council is happy to explore with the businesses how they can organise deliveries and what measures can be put in place, such as no beeping or loud radios, to reduce disturbances.

“We want our local businesses to thrive and I am hopeful we can find a compromise so the businesses and residents are able to live and work together as part of the wider East Street community.”

J&J Butchers & Grocers were approached for a comment, but did not respond before deadline.

This is discraceful. It is illegal to do deliveries that late at night. Southwark council need to pull their finger out. They are the worst council I ever had to deal with back in the 80s and they don’t seem to have changed their bad practices .