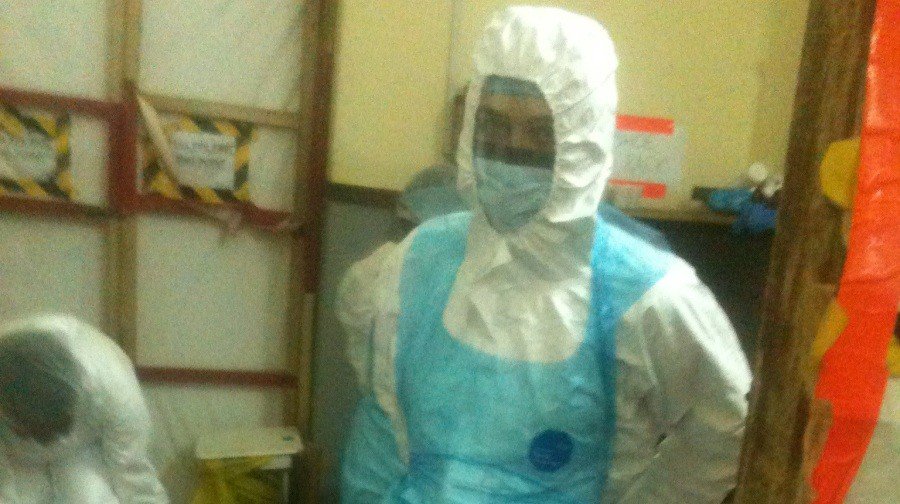 Junior doctor, Claire Ferraro is running the marathon in her Ebola-fighting isolation suit

A brave Ebola-fighting doctor is now preparing to run the London Marathon in her isolation suit, to raise money for the award-winning partnership of Southwark hospitals who put her on the front line.

Junior Doctor Claire Ferraro returned from Freetown in Sierra Leone last week, where she had been working for the King’s Sierra Leone Partnership (KSLP) for four months.

Arriving at the height of the epidemic, 28-year-old Claire had to deal with many people dying on her shift. “The very first day was all a bit shocking,” she said. “People died really quickly. You walk into the unit one day and overnight or the next day they might have died. I had to deal with a number of dead bodies every day and telling the family. That was pretty hard,” she added.

After two British nurses hit the headlines for contracting Ebola last year, Claire confessed she was “very nervous” about going to work in Freetown’s Connaught Hospital, but said she had the full support of her family.

“You definitely think about it. I was nervous, but it’s good to have a bit of nervousness because it makes you concentrate on what you’re doing. When you relax is when mistakes are made,” she said.

The young doctor had prepared herself to see a lot of blood, but what really struck her was the confusion in afflicted patients and the ‘Ebola stare’. “They had an empty look like they know they’re really sick. Out of six beds you could come in and see two or three people on the floor, confused and muttering to themselves and another might have died. It was a really shocking first few weeks,” she said.

Thanks to doctors like Claire working with the KSLP alongside local medical staff, the rate of confirmed cases has reduced to four a month coming through the hospital doors at the last count. She says the national Guardian University Award for best international project the KSLP won last week is “well-deserved” and is now in training to run the London marathon to raise funds to keep the work going.

If you want to help Claire, who plans to shed her isolation suit some way way into the run, hit her £3,000 target, visit here