The council lost a similar case in 2020 after a Court of Appeal ruling forced them to give a family band one priority housing.

A family who were told by Southwark Council that their statutory overcrowded living situation was a “deliberate act” have won their court battle against the council, Tuesday May 24.

Milton Laines Roman moved to the UK in 2016 and brought his family over shortly after. For five years, Southwark objected to putting his wife and two children on a priority housing list, even though they shared a small Walworth studio flat.

But the High Court has ruled against the council, saying that an applicant for council housing cannot have caused their own statutory overcrowding by a ‘deliberate act’ if they lack the funds to afford more suitable housing.

Following his victory, Milton said: “Southwark have constantly disbelieved me and my wife and tried to make us feel as though we were in the wrong.

“We feel so relieved that the judge has understood the situation we were in and has agreed that the council has broken the law in denying us housing.

“I hope that this can bring an end to the overcrowding we have faced for over five years.” 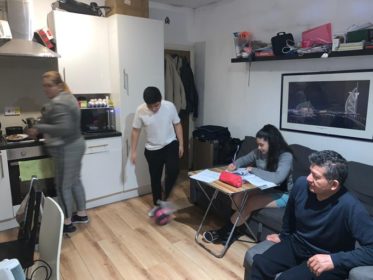 Milton and his family in their studio flat home

Southwark Council said after the ruling that they were ‘wrong to assess the family as deliberately overcrowding themselves’ and told the News they would work with the family ‘to ensure their housing needs will be met’.

In July 2021, the council hit Milton’s family with a decision letter rejecting their plea for priority housing.

An official from the council’s Housing Solutions Department said Milton’s family should have found suitable housing “before paying for their airfares”.

In December 2020, they supported Peckham couple Flavio Flores, 46 and Elba Velasquez in their triumph over Southwark Council, who again said their overcrowding was “a deliberate act”.

Following Milton’s win, Sam Tippet from the Public Interest Law Centre said: “We are delighted that the High Court has vindicated our client in his long battle for housing justice.

“Many London councils use ‘gatekeeping’ tactics to deter low-income and homeless households from accessing support to which they are legally entitled.

“There is an established culture of disbelief in housing offices, with families routinely being accused of fraud or of causing their own housing problems. Such issues disproportionately affect migrant communities and communities of colour.

“In this case, the message from the council has been loud and clear: if you are a working-class migrant family, don’t move into Southwark.”

Cllr Victor Chamberlain, Southwark Liberal Democrat Group Leader said: “This council should be getting on with building social housing and do what it can to stem the huge increase in empty council homes happening under its watch.

“This behaviour toward residents living in unfortunate conditions is, sadly, to be expected from a Labour party who stopped caring what anyone else thinks.”

Councillor Darren Merrill, cabinet member for council homes and homelessness, said: “The judge ruled that the council was wrong to assess the family as deliberately overcrowding themselves. We respect the decision of the court and we are carefully reviewing the judgement.

“We should not have described them as deliberately overcrowded, and we are sorry we got this wrong. We’re continuing to work with the family to provide them with support, to ensure their housing needs will be met.”