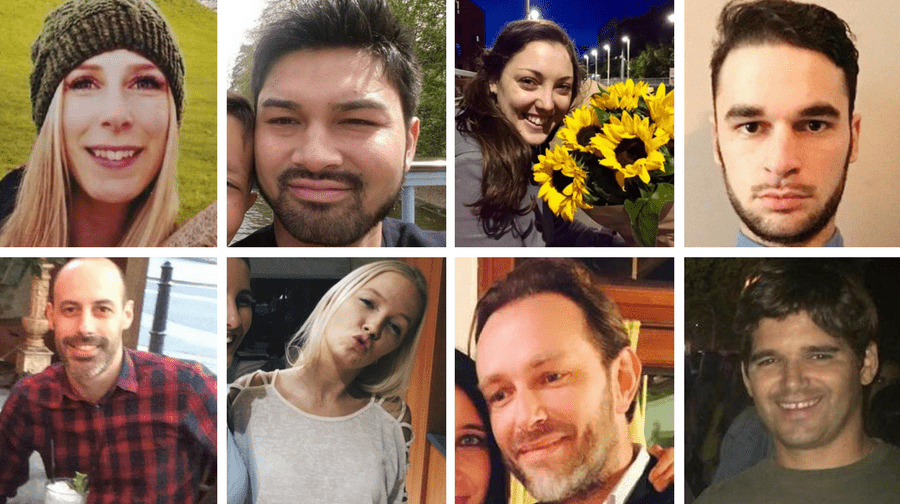 The 30-year-old had been on holiday in London and tragically died in her fiancé’s arms after being struck by the speeding van.

In a statement, Ms Archibald’s family said they had lost a “beautiful, loving daughter and sister”.

“She had room in her heart for everyone and believed strongly that every person was to be valued and respected,” they said.

“She lived this belief working in a shelter for the homeless until she moved to Europe to be with her fiancé.

“She would have had no understanding of the callous cruelty that caused her death.”

In a statement, her family described the Australian as “the most outgoing, kind and generous person who loved to help people”.

“Kirsty was loved and adored by her family, friends and boyfriend,” they said. “Helping people was what she loved to do in her job as a nurse and in her daily life.

“As she ran towards danger, in an effort to help people on the bridge, Kirsty sadly lost her life. We are so proud of Kirsty’s brave actions which demonstrate how selfless, caring and heroic she was, not only on that night, but throughout all of her life.”

Paying tribute, Dame Eileen Sills, chief nurse at Guy’s and St Thomas’ NHS Foundation Trust, said: “Kirsty was an outstanding nurse and a hugely valued member of the staff team in theatres recovery, described by her colleagues as ‘one in a million’ who always went the extra mile for the patients in her care.”

French waiter Alexandre Pigeard has been named as one of the victims by French media.

It is believed the 27-year-old from Colleville-Montgomery, in Normandy, was a waiter at the Boro Bistro near Borough Market.

He was reportedly stabbed in the neck in front of friends.

Sebastien Belanger has also been confirmed dead by French media.

The 36-year-old, who lived in Leytonstone and worked as a chef at the Coq d’Argent restaurant, had been at the Barrowboy and Banker in Borough High Street with two friends.

Sebastien’s girlfriend of eight months, Gerda Bennet, flew back to London from her holiday in Malta to desperately search for him.

Speaking to the News on Sunday, the 22-year-old said Sebastien had last been online at 10pm and she had last exchanged texts with him at about 5pm.

Gerda posted a picture of the couple on Facebook early on Tuesday morning with the words “mon amour”.

Australian Sara Zelenak, who had been working as an au pair in Herne Hill, has also been confirmed dead by her grieving mother.

The 21-year-old had tickets to the Ariana Grande concert in Manchester but ended up not going and also narrowly avoided the Westminster attack.

Her mother, who had flown to London to find her daughter, posted on Facebook yesterday, Wednesday: “Sara Zelenak is confirmed dead, they found her body and has DNA tests confirmed,” she wrote. “Thank you for all the overwhelming love and support from everyone.”

Her best friend, Sam Hetherington, also paid tribute, writing: “Our beautiful Sara Zelenak,” she wrote. “The closest friend to Bea and I since we were in Year 7.

“You brought so much joy into our lives, to me and Bea for so long and also to Mum and Dad, who took you under their wing like no other. I can’t believe we don’t get to grow old together.”

James McMullan with his nephew

The sister of James McMullan fears the 32-year-old business is dead after police found his bank card on a body.

James was last known to be smoking outside of the Barrowboy and Banker just minutes before the van ploughed into people.

Speaking to the News the day after the attack, James’ sister Melissa McMullan, 30, said he had been outside the pub smoking a cigarette and waiting for his friends after bouncers refused to let him back in.

“I think he was out for a bit of a special occasion because he was out with his friends from school and he doesn’t see them very often because he is always working,” she said. “This is the first time in months my brother has been out.”

Police also fear Frenchman Xavier Thomas may have been thrown into the River Thames during the attack.

The 45-year-old had been walking along London Bridge with his girlfriend Christine Delcros, who was badly injured in the attack.

A body was recovered from the river near Limehouse at about 7.44pm on Tuesday by specialist officers from the marine police unit by formal identification had not taken place by the time the News went to press.

“Formal identification has not yet taken place, however Mr. Thomas’ next of kin have been informed of this development,” the Met Police said in a statement.

Relatives of Spaniard Ignacio Echeverria fear the 39-year-old is dead after he was last seen lying on the pavement after attempting to fight off the attackers with a skateboard.

Relative and journalist Isabel Duran tweeted that he was “in heaven with his inseparable skateboard”, however although he has now been missing for four days, there has been no official confirmation of his death. Although as the News went to press on early Wednesday afternoon police put the death poll at eight.