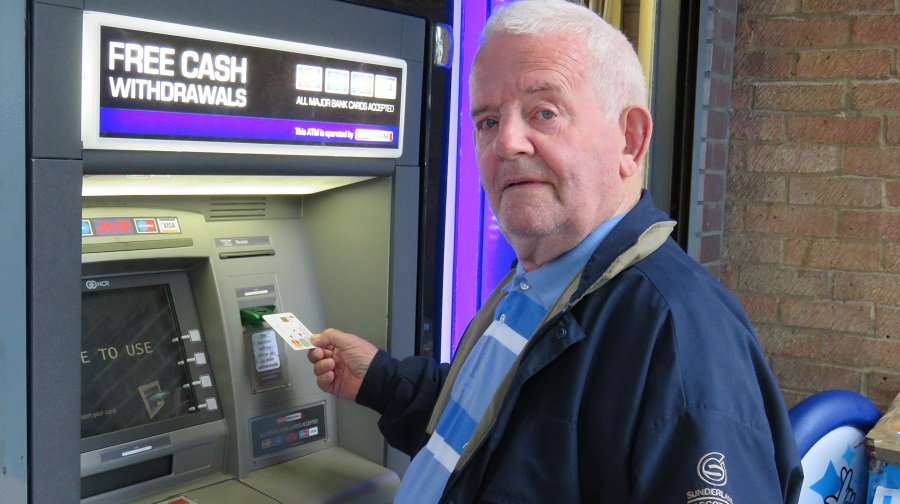 An elderly pensioner has warned other cashpoint users to be vigilant after having his bank card stolen in broad daylight.

Matthew Redmond said he had only just put his card into a cashpoint on Southwark Park Road when a stranger came up behind him and ran off with it.

The 80-year-old, who has lived in Bermondsey for many years, said the person who stole his card managed to withdraw £300 from another cashpoint just yards down the road – and has now warned others to take extra care.

“It was about 1.30pm on June 17 and I was at the cashpoint outside the newsagents on Southwark Park Road, near Iceland,” said Mr Redmond, who only retired four years ago.

“At that particular time there was nobody around.

“I went up to the cashpoint, tapped my number in and I felt something on the back of me and I looked around and said ‘what do you think you’re doing’ and he said ‘sorry’.

“Then I went to get my card out and he said ‘let me help you’ and he pulled out a handkerchief and seemed to be going over the keys, then he slipped around the corner and down the alleyway.”

Mr Redmond said he did not remember seeing anyone take the card and that he thought he had been distracted by one person while it was stolen by another.

“When I tried to see if my card was in the machine that’s when I realised they had taken it,” he said.

“Then I rang my bank, London Mutual Credit Union, to get the card blocked and found out he’d withdrawn three times.

Mr Redmond said the bank refused to pay out £300, so he turned to Bermondsey and Old Southwark MP Neil Coyle for help.

“I went to see Neil Coyle and he contacted Credit Union on my behalf,” he said.

“He rang me and said he managed to get the money and to check if it was returned and it was.

“It took just over three weeks to get the money back; it’s a lot of money for me.”

“The Mutual should know better and should have helped sooner but I am very pleased Mr Redmond got his money back.”

A police spokesperson told the News: “The incident at Southwark Park Road was investigated by officers from  Southwark and due to all lines of enquiry being explored, with no suspect leads the case has been closed.

“Should any new information come to light it will be reopened.”