Election 2015: Will UKIP have a serious impact in the borough?

UKIP are on the rise, but how much will they impact voting in Southwark? 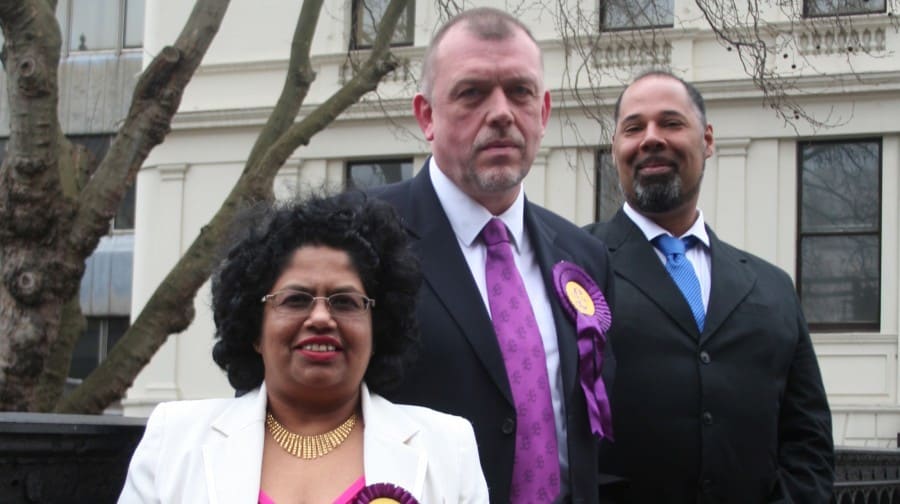 The hustings at Southwark Cathedral last Saturday was largely unremarkable.

The candidates alternatively made promises and sniped at each other, while the audience asked the same questions about the same topics.

The thing that made this Q&A unusual – other than the stunning gothic setting – was the make-up of the candidates. Invites were only given to major parties and, for the first time, UKIP were included in this list.

The inclusion highlighted the party’s rapid growth over the last decade. The number of parliamentary candidates has grown from 495 in 2005 to 625 this year – including Andrew Beadle contesting Bermondsey and Old Southwark, David Kurten in Camberwell and Peckham and Rathy Alagaratnam in Dulwich and West Norwood.

While the party are not expected to win a seat in Southwark – they have been given odds of 100/1 in each constituency – they are expected to steal votes from other parties and offer an alternative vote for disgruntled voters.

“We’ve had [Lib Dem, Simon] Hughes for 32 years, the last five of which he sat in government and became a minister, and so all the promises he has made over the decades came to nought and now Bermondsey’s people – the very best and no-one’s fool – know it,” Mr Beadle said.

“But lo, who is the real alternative? The media would have you believe it is a Labour/ScotsNats deal. What? The same Labour which has wrecked our economy and run an incompetent and incomprehensible Southwark Council? Maybe the Labour elite in Southwark think it has sewn up Bermondsey but UKIP’s supporters beg to differ.”

Portraying themselves as the ‘common sense vote’, the borough’s candidates are focusing on leaving the EU, stemming immigration and reducing unnecessary spending.

Mr Kurten said: “People understand that more and more pressure is being piled onto the vital public services we all pay for – housing, schools, health, transport and the environment, and that until we tackle that challenge of uncontrolled EU immigration, there is no financial solution.”

Ms Alagaratnam added that ‘profligate waste such as overseas aid given to dictators, and undeserving countries, destructive vanity projects such as HS2, corrupt global corporatism and the bottomless pit of European Union waste’ must be stopped.

While it may be too soon for UKIP to mount a serious parliamentary charge in the borough, the votes they steal from the other parties may nonetheless have a tangible impact on results.

Southwark NewsNewsElection 2015: Will UKIP have a serious impact in the borough?