Election interview: I’ll be a thorn in the side of Southwark’s Labour council, vows Conservative candidate Andrew Baker 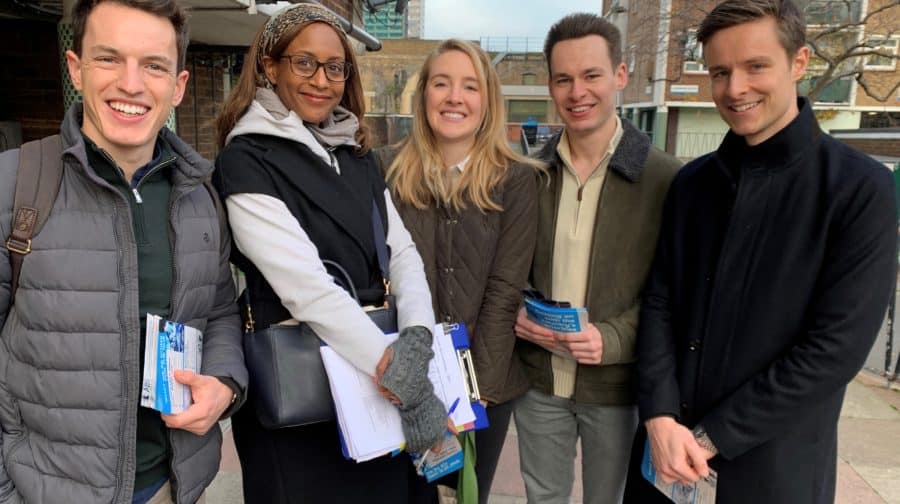 Politics is something of a family affair for Bermondsey and Old Southwark Conservative candidate, Andrew Baker.

But while he and his brother are both standing as Tories in the general election, his father is a serving Liberal Democrat councillor in Teddington, south-west London, where they grew up.

“It always makes for interesting dinner table conversation!” he laughs. “So there’s a bit of family disagreement there.

“But it’s nice having a brother doing it, because you get to talk about things in confidence and lean on each other.”

The 28-year-old studied politics at Durham, before starting his career in finance law, and has lived in Bermondsey for four years (after a stay in Clapham post-university “just like everyone else.”)

He is a school governor with the Bridges Federation, which runs Snowsfields, Tower Bridge and Robert Browning primary schools, and volunteers with a charity based near Shad Thames which gives mentoring to children from deprived backgrounds.

“When it came to the election, I thought well, throw my hat into the ring, didn’t apply for anywhere else, only here,” he says.

“I thought I could make a half-decent local candidate.”

What then does he think are the issues affecting Bermondsey and Old Southwark voters?

He admits that when he started the campaign, he thought this would be the Brexit election – but the number one issue he gets canvassing on the doorstep is housing.

“Of course it’s housing,” he says. “And it’s frustrating because you’re fighting from a general election campaign position, but all the issues that are coming up are essentially local council issues.

“So our argument is very much is that we should be using this election to hold Labour-run Southwark Council to account as well.” (The Conservatives do not have any representation on Southwark Council, which is controlled by Labour and has Liberal Democrat opposition.)

But isn’t this something worsened by tightened local authority budgets, which ultimately comes from central Government?

This is something he would do, he pledges, if elected, and says he has already butted heads with the local authority over its “mind-numbing drudgery.”

Baker says he would like to be a thorn in the side of the local authority over housing; and questions if Southwark’s three Labour representatives have really been challenging their colleagues.

“It’s the largest development to happen in Southwark’s borough. It’s frustrating, people need to be heard when it comes to developments like this.

“They’re not NIMBY-ists – their concerns are hugely legitimate.”

Residents have recently started proceedings that could lead to a legal challenge over the approved plan, amid fears of housing segregation and overwhelmed local transport.

Crime is another area which he is concerned about. “We have in our manifesto a commitment for 20,000 more police officers, which will help,” he says.

“But we kind of need to change the narrative a bit. We need to be careful not to demonise certain a groups and have an approach to crime that works with the community as well.”

Another key concern, which he thinks is widely shared by younger voters, is the environment. “Southwark has the worst air pollution in London, SE1 is the worst area for it,” he says. “And it’s something that when I raise it on the doorstep, people are genuinely concerned about.”

The green group, Extinction Rebellion, attempted to organise a local hustings on climate change and the environment, which he says he would be really keen on. But it did not go ahead.

“So I emailed all the candidates about it… and the only party refusing to take part was Labour and Neil Coyle,” alleges Baker.

“You’re meant to be the MP for the area with the worst air pollution in London, and you won’t go on and have a hustings on the environment?”

Baker faces a challenge as a candidate for the party which has been in Government for nearly a decade. Does he accept that austerity will have exacerbated the very problems he now raises?

He robustly defends the Government’s record. “We’ve built over one million homes in the last five years, we’ve built more social homes than Labour did in their time in office,” he says by way of example.

Baker rapidly lists the Right to Buy ISA, cutting stamp duty, a life-time deposit scheme for renters and a ban on No Fault evictions, as well as lifting the borrowing cap on local authorities to build more social homes, as evidence of the Party’s commitment to housing issues.

“What we’re doing at a national level is pushing for more building and helping to get people on the property ladder and helping renters as well,” he argues.

More generally, he accuses Labour candidates of having a very short-term memory of 2010 – insisting that cuts were a necessity to sort out the economy.

Baker hasn’t always been a Conservative. He was previously a Liberal Democrat – and says he was “quite happy with the coalition, thought it did really some good things in education and rebalancing the economy” – and joined the party after the Brexit referendum.

“I voted remain, campaigned for remain,” he says. But now he is standing to get “Brexit done” in a borough that was very heavily remain. Doesn’t that make him out of step with local voters?

He rejects that. “The position people had in 2016 is not necessarily the view they have now. My view now is that it does need to be done,” he says.

“I think ultimately, people were turning out in numbers they hadn’t done before, and they put a lot of trust and hope into that vote.

“And the damage to our democracy to turn around now and just say, ‘no thank you’, would be huge.”

He points out more than one in four Southwark voters voted Leave.

“My question is, who’s representing them? Let alone those who voted remain and think we should honour the result.” he argues.

The seat is widely seen as a two-horse race between Labour and the Liberal Democrats.

“My betting odds are about 100-1 outsider,” Baker readily admits. “But Brexit has changed a lot of things.

He says being an outsider for the seat is liberating.

“So in a way it’s quite liberating because you can be much more versatile.”

Southwark NewsNewsElection interview: I’ll be a thorn in the side of Southwark’s Labour council, vows Conservative candidate Andrew Baker