Election Interview: I doubt I’ll win but a vote for me is a vote against a ‘one-party state’ in Southwark, says Jane Lyons 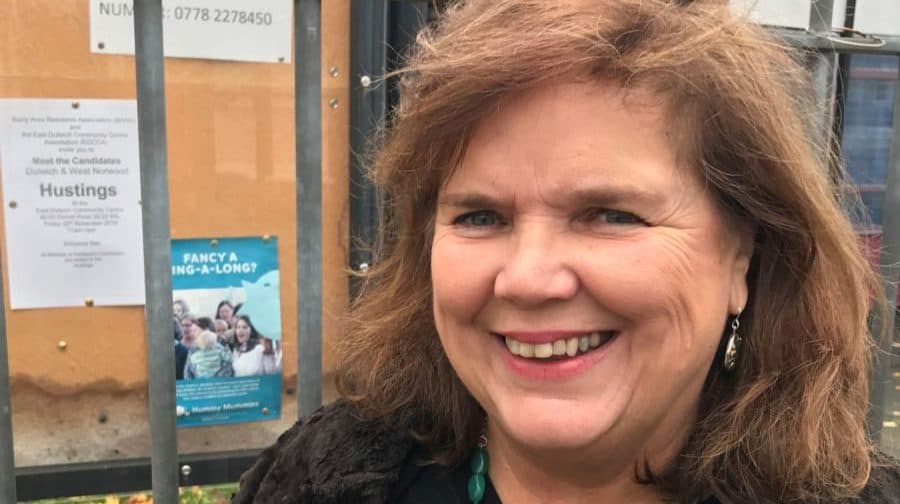 Jane Lyons is the kind of life-long Tory you may be forgiven for thinking had gone into hiding in Dulwich and West Norwood.

She describes the 2018 local elections, which saw Southwark go almost entirely red, as a “total wipeout”.

Can they recover? “At the time we blamed Brexit and Windrush hitting within two to three weeks at the time. Obviously one didn’t want to blame oneself.

“I was really upset because I am very local and I am not in favour of one party states of any description.”

“I just think it’s important to have someone recognised as a Conservative voice who stands locally.”

At fifteen Lyons was already politically active and attending election hustings in Hendon, where she grew up.

“I was very involved in politics as a young person.  I’m in that 1979 election winning poster ‘Labour isn’t working’.

“I was an active Tory supporter and activist in north-west London. We had no idea at the time how iconic it would be.”

Now, 64-years-old, she stood in council election at the age of 21 in north-west London and “took twenty years off” politics to have three children and run her own business.

Thirty-odd years ago she crossed the river and landed in Southwark, living in Peckham for around a decade before settling in Dulwich, where she raised her family.

She worked in PR and corporate communications, mainly in retail and consumer health and now runs the rare cancer charity, Cancer 52.

About ten years ago David Cameron put out a call for more ‘ordinary people’ and especially women to get involved in politics.

She was elected to Southwark Council, as a Village ward councillor, in 2014.

Did she hesitate about standing for the Tory party after so many moderates stepped down?

“I think we are in a political situation that I don’t remember witnessing before, a lot of the base rules have changed.

“I was brought up in an era of tribal politics. What is happening now though is that both the big parties are historically broad churches but they’ve gone too broad for many, maybe to the left maybe to the right.

“The core beliefs of being Conservative, I have to dig a bit deeper to find them.

“They are things like opportunities for all, it doesn’t matter where you come from, it is about where you’re going.

“What is lost a lot in the messaging currently is that there is a huge amount of compassionate Conservatives who want the best for everybody and believe that how you do that is by getting out of this scenario and going back to the domestic agenda.

“I, for the record, voted Remain like 80 per cent of the constituency.

“I wouldn’t vote for a no deal and I would seriously question the ‘oh I didn’t like the result of the vote last time can we all go back and do it again view’ which I just really struggle with. That’s undemocratic if you ask me.”

On Unite to Remain and Labour’s Brexit stance she says: “There’s a lack of clarity, sort of like it or lump it. The Conservative message on this issue is very clear. It’s not going to be the most popular round here.”

“There are some things as a woman you might think could have been handled better but I am not about to go into a personal commentary on the PM.

“The reason he won the leadership election, I think, is an awful lot of people just said ‘this is where we are and the best person to move us out of this is Boris Johnson’.

“It’s really not the time for collaborative nice-guy politics. At the moment we need leadership. Does everyone like the leader? Probably not.

Lyons hopes she comes across as “as a fairly reasonable, pragmatic, centrist Conservative who would now like to see the domestic agenda moved on and Brexit handled appropriately and firmly”.

She hopes the Tories will make some gains in Southwark thanks to Brexit and achievable spending commitments.

“We may well pick up a lot of people who just want to leave, we may pick up Lib Dems who don’t want to go as far as Labour. I think it is a Brexit election but the next big issue is the NHS and social care.

She maintains there are rock solid pledges and commitments already there on health and social care.

“The NHS plan has been in place for nearly a year. There is a five year funding settlement and a ten-year plan.”

Isn’t the crisis facing our public services a problem of the Tories’ own making?

“I would have to push back on that, there are a lot of factors at play – demand being one of them – and an older population.

“The funding scenario has been more than challenging. No one wants any individual to lose out.

“Having said that, in terms of pledges and commitments already in place, we can’t move on and do any of these commitments in terms of fixing this stuff if we don’t get through the initial political crisis.

“The debate about whether the bank account was empty in 2010 – I don’t know what another government would have done in terms of managing the budget and looking at services.

“I can only say that the future looks much better.”

Referencing the coalition years, and legacy of austerity, she argues: “I do think things couldn’t have gone on as they were.

“Somebody has to grasp the nettle and manage their way out of the economic mess that we were in.”

And her response to the numbers flying around Labour’s manifesto?

“It just seems difficult to believe that level of funding is going to appear and be spent on lots of lovely things.”

She admits free WiFi would be a welcome policy in the “broadband black hole of Dulwich Village” but is sceptical, describing Corbyn’s manifesto as “Christmas in a bag.”

Has she found it hard canvassing with Boris Johnson as leader?

“I do not have trouble aligning myself to the Prime Minister from the point of view of the hope he offers to get this fixed and get the focus back on the domestic agenda and getting things done,” she says, confirming her support for him in the leadership contest. “There are some things as a woman you might think could have been handled better but I am not about to go into a personal commentary on the PM.

“The reason he won the leadership election, I think, is an awful lot of people just said ‘this is where we are and the best person to move us out of this is Boris Johnson’.

“It’s really not the time for collaborative nice-guy politics. At the moment we need leadership. Does everyone like the leader? Probably not.

“For the nation as a whole I honestly believe we need somebody who will get us out of the current paralysis.”

What about his deal being worse than May’s and suspending parliament?

“I think I am focused on the ends rather than the means at the moment, and I think I’ll leave it at that.”

Lyons is well aware knife crime and tackling youth violence is a burning issue. But in a liberal seat, how well does the party’s tough talk on sentencing and increased stop and search chime with voters?

She points to commitments to tackle drug-related crime and investment in proactive agencies: “We will use a set of sensible measures to tackle drug use and drug-related crime by investing in youth services and schools, legislating for stricter sentencing laws to keep criminals off the streets, better rehabilitation for repeat offenders, and strengthening National Crime Agency to tackle county lines gangs.”

If elected, a key priority would be making sure Dulwich and West Norwood gets “more than its share” of those extra 20,000 police Johnson has promised.

One area it’s harder to argue financial prudence is the climate emergency.

Although they are committing to going carbon neutral by 2050, isn’t it too little too late? Don’t we need huge upfront spending to make the long-term savings?

“There is a very strong pressure within the party, elements very, very focused on the green agenda.

“If in power, this is something that can be sped up and [we can] become more passionate about.

“I don’t think it’s a lone priority, I think it is a high priority. One of many high priorities at the moment.” Southwark NewsNewsElection Interview: I doubt I’ll win but a vote for me is a vote against a ‘one-party state’ in Southwark, says Jane Lyons