Election Interview: ‘It is okay to not vote Labour. We are not a monolith,’ says Camberwell and Peckham candidate Julia Ogiehor

'Harriet Harman is a great, well respected MP but it is up to all sitting MPs to keep proving themselves. I believe I can be a real challenger' 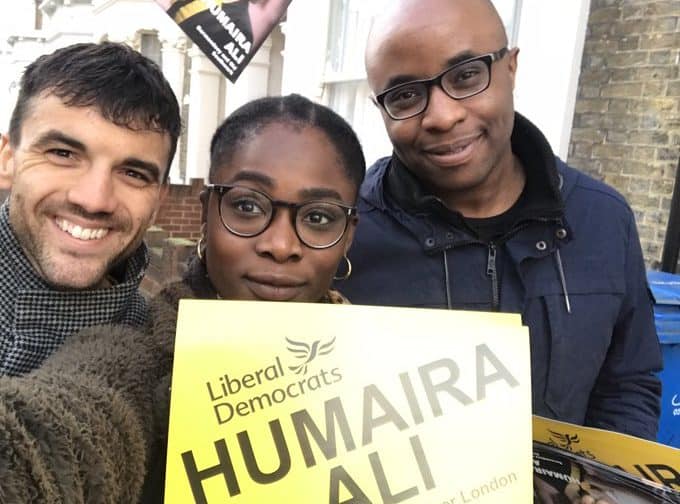 “I was eighteen when I could first vote and that’s when I first supported the Liberal Democrats,” says Julia Ogiehor, a 33-year-old Lib Dem challenger to Harriet Harman.

She believes she can help unlock a Lib Dem vote – pro-European, pro-freedom of movement – among BAME communities in Camberwell and Peckham.

Ogiehor, a former Lewisham College student, grew up in Queen’s Road and later moved to Walworth and Kennington before graduating from the University of Hertfordshire with a law degree in 2009.

She had a stint as a paralegal and held some public relations and public affairs roles, but it was an internship for Simon Hughes, in 2013, that ignited the possibility of a future in politics.

“I’m from an estate – black and working class and everyone votes Labour. I wanted to figure out why and what they were voting for.

“I want to get across that it is okay to not vote Labour. We are not a monolith.

“What appealed to be about the Liberal Democrat party is the notion of saying that you can be anything you want to be, your life circumstances should be the same, with the same opportunities as someone from a wealthier background.

“It was the idea of not being spoon-fed and being allowed to progress.

“Growing up you are always told you don’t know as much as others and they know more than you.

“While working with Simon I had ideas and I was told they were good ideas, now go and put them together. I felt like my views mattered.

“In a way, it took me by surprise that it’s really not that hard to get into politics, you just need someone to direct you a little bit at first and give you that encouragement.”

The Lib Dems may still hold some sway in Bermondsey, but can they really gain a footing in one of Labour’s safest seats?

“A lot more people are getting into politics because of Brexit. Everyone keeps saying Camberwell and Peckham’s a safe seat but in this election who knows?

“Harriet Harman is a great, well respected MP but it is up to all sitting MPs to keep proving themselves. I believe I can be a real challenger.”

She says she has has even been helped by Harman in the past.

The Labour stalwart intervened after her mother was stopped while travelling from Nigeria to the UK and prevented from entering the country for a month.

Border agents didn’t believe her children were hers.

Brexit has given her party an opportunity, she says, and these experiences and others could chime with swing voters or those disillusioned with Labour: “The EU referendum piqued people’s interest in the Lib Dems again, and then the 2017 snap election and European Parliament election gave people the opportunity to support us.

“I have been homeless and living in temporary accommodation. It happened because my mum’s relationship with her partner had broken down and it was impossible for us to rent privately. We just didn’t have that kind of money.

“Your situation has to be very dire to get rehomed right away and ours wasn’t dire enough.

“We were put in temporary accommodation near Walworth Road and then during my A Levels moved to Kennington and my mum is still there now with my brothers.

“My formative years were all spent in Camberwell and Peckham

“Both of my parents are Nigerian. I was born in the UK and then from two to twelve lived in Nigeria but came back for secondary school.

“I’m a Londoner with a Nigerian heritage and I’m British. I’ve had a few people say “but where are you from? You’re not from here’.

“Our heritage is multifaceted – you should be able to describe yourself as Scottish and from the UK and a European, for example.

“I feel that when you are asked ‘where you are from?’ it’s based on skin tone.

“Would someone ask that if you weren’t black or brown? I  am as much British as you are.” Ogiehor and her mum out canvassing

The big question is whether she can win over those who still feel betrayed by the Lib Dems’ time in power with the Tories – especially when the Remain and left-leaning vote will be split in this seat.

“I was upset about how we were criticised for our record in coalition,” she says. “Often the people having a go were the people who voted in the Tories.

“I was vocally against tuition fees and when it backfired I felt that Labour made it into the Lib Dems being liars and what everyone forgot was that Labour introduced and increased tuition fees.

“The party has new faces. We wouldn’t hold Labour and the Tories to what happened many years go.  We should all move on. There are new, young, more diverse people in the party now.”

In May last year she was elected as a Lib Dem councillor in Haringey and won a target seat.

“In that time I’ve learnt a lot about how to be really firm with what I want,” she explains.

“I am the shadow communities spokesperson and that gives me a platform to talk about youth crime.

“I have two brothers who are tall and black and growing up in London right now. They live on a notorious estate. One has been robbed, chased with a knife, and stabbed. Within a year in my ward in Haringey I got preventative measures in place, more CCTV, redecoration in certain areas and redeployed the community police to hotspot areas.

“Local police are calling me up about kids being groomed. A lot of people do not have that kind of relationship with the local police. We are getting more safe havens with local businesses – places where young people can go and stay there and know that they are safe. This was an idea for Muswell Hill and I am trying to expand it all over Haringey.”

Is she concerned about standing as a black woman MP given the extreme abuse others experience – especially as a newcomer to politics?

“I get more misogynist, racist and ageist abuse than some people,” she says.

Earlier this year she gained huge support after sharing online details of racist abuse she suffered while travelling on the tube from two men who refused to accept she was from London and described her as “uneducated”.

“I call out abusers online. I have a podcast with eight black and mixed race women from four parties coming together.  We wrote an open letter signed by Diane Abbot calling for more support to end abuse against women politicians.

“That is how I will fight – agreeing to respectfully disagree. I will not engage in personal attacks, for my own mental health and safety as much as anything.

“I’ve already had my mum chased and shouted at when she’s been out with me.”

A key priority if elected is tackling youth violence with evidence-based solutions.

She is very concerned the narrative that tougher enforcement measures are the answer will alienate young people, including those stopped and searched.

“More police is not the panacea – it is a plaster over a crack that is getting bigger. Prevention costs the government less.

“The people who commit crime often have had substandard education, some have special educational needs, mental health problems or have experienced abuse.

“And there is an unconscious bias if you’re a black male.

“Young people do not know where to go to hold the powers that be to account. We need to change with the times.

“If you make it really hard for them then they will give up.

“Even if I don’t win, I want to show that they can get out there too and get involved in politics.

She is clear that “this is a Brexit election” and thinks the Lib Dems will benefit from their unequivocal stance.

“Our position has always been clear. People mocked us for calling for a second vote on a deal.  Why would we not want to revoke? We want to stop Brexit and then we can move on.

“I believe if we leave the EU the impact on people in Camberwell and Peckham will be worse than the impact of austerity.

“We have wasted three years. I don’t blame people for being fed up but this is the time to push yourself and give it your everything. I want to be able to look back and think I did everything I could.

“Everyone should do that whether they are Leave or Remain.” Southwark NewsNewsElection Interview: ‘It is okay to not vote Labour. We are not a monolith,’ says Camberwell and Peckham candidate Julia Ogiehor