'One concern is that Southwark council, and many councils like them, are failing to maximise social housing in these developments' - Paul Heron, Public Law Centre 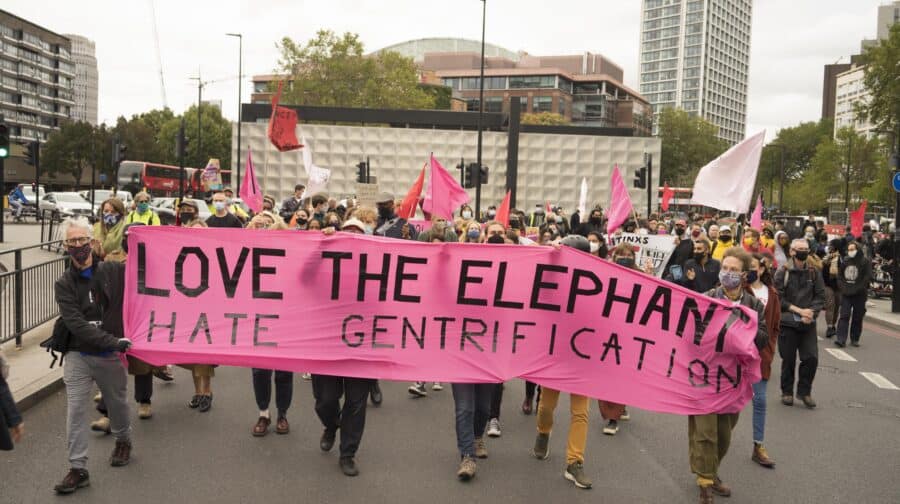 A demonstration outside Elephant and castle shopping centre in its last week of trading, September 2020 (c) Sebastian Garraway

A Court of Appeal hearing against a previous High Court decision in favour of the Elephant and Castle regeneration scheme will be held next week.

The public, online hearing is scheduled for two days starting on Tuesday, March 16.

Planning permission for the demolition and regeneration of the shopping centre was approved by Southwark Council in 2019. A High Court challenge against landlord and developer Delancey’s plans was unsuccessful, with Mr Justice Dove refusing to quash the planning approval.

The appeal has been mounted by the 35% campaign’s Jerry Flynn, with support from campaigners Up the Elephant.

As the demolition has already begun, the hearing’s focus is on the number of homes in the new development for social rent – currently 116 after concerted lobbying from housing activists. Previously this figure was zero. Campaigners also believe another 42 council homes could be included on the site with funding from City Hall.

A rally in support of the campaign will be held online the same morning.

Mr Flynn told the News: “Delancey may have already begun the demolition, but the battle for what is to be built is not over.  Southwark is not getting as much social rented housing from Delancey as it should be, while the need for it has become even more acute. Delancey are not building the homes and new shops that local people need. Their planning permission should be quashed and homes and shops that local people can afford built instead.”

“One concern is that Southwark council, and many councils like them, are failing to maximise social housing in these developments,” he explained.

“Another concern is that councillors are failing in their duties – far too much power is being given to unelected council officials in the decision-making process.  This has to stop otherwise there will be a democratic deficit in planning law”.

The council and Delancey say they are committed to creating a new town centre which includes improved transport links, a new campus for London College of Communication, and building affordable housing on a site where previously there was none.

Elephant and CastleDelanceyHigh CourtCourt of Appeal

Southwark NewsNewsElephant and Castle: Court of Appeal hearing set for next week as campaigners call for more social housing