Watershed moment as demolition is expected to begin next month 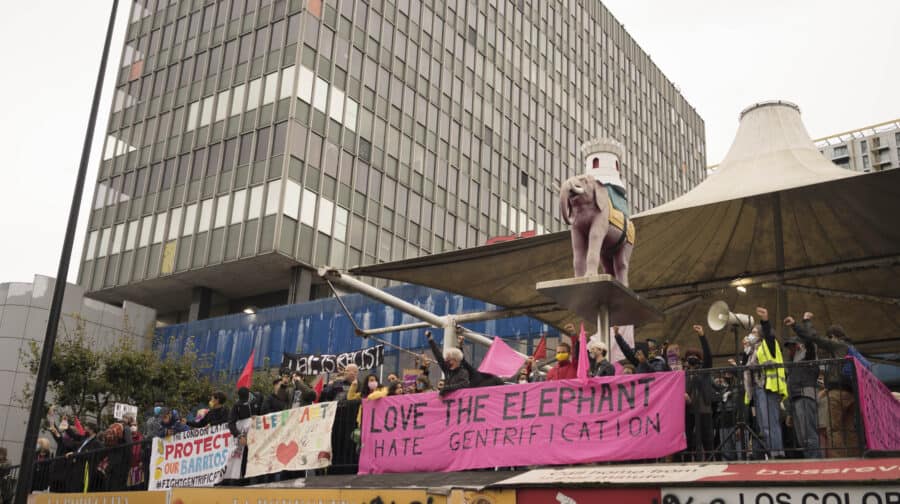 Activists gather outside the shopping centre in September, as its doors closed for good. Credit: Seb Garraway

Elephant and Castle’s shopping centre closed its doors for good last week – but what happens now?

The centre’s doors are now locked, the iconic statue taken down for refurbishment before being temporarily installed in Castle Square, and businesses have either shut shop or been relocated.

Thursday, September 24, was a watershed moment in the history of SE1.

Demolition is expected to begin in October to make way for the first phase of development, taking approximately five years. A second phase,  including house building, will take the project until the end of the decade.

Campaigners, who say 40 traders are still left without their livelihoods and nowhere to go, gathered outside the centre to protest last week, promising their fight is far from over. The regeneration scheme’s proponents – including Southwark Council – argue the building had outlived its lifespan and was in dire need of knocking down.

The three billion pound scheme aims to take the decrepit ’60 icon and recreate its original aim to be a destination shopping zone – a ‘Piccadilly of the South’ – as it was once marketed – and turn it into a new ‘town centre’.

London’s first shopping centre will make way for a new design including retail space, restaurants, bars and housing on land where there are currently no homes, a new campus for the London College of Communication, and new ticket hall for the Northern line.

The long lobbied-for Bakerloo line extension is also largely contingent on the regeneration going ahead.

Although the designs will see nearly a thousand homes built on a site not owned by the council – only 116 of them will be at social rent; i.e. council housing. The first iterations of Delancey’s plans outlined far fewer council homes. The number was significantly upped after an effective and coordinated campaign and sustained media attention, which also secured a number of key concessions for traders.

The closure was delayed by several months due to the pandemic. It comes after years of hugely controversial and three-times delayed planning decisions, and an increasingly bitter war of words between campaigners and the plans’ developer; Delancey.

As the News has reported, campaigners had angrily rebutted Delancey’s claims they were sharing ‘misinformation’ online about the number of traders rejected from financial support or new ‘affordable’ premises. A last-ditch attempt to set up new market stalls on the roundabout to house the remaining traders had been submitted to City Hall just weeks ago.

The News understands the site is too close to the demolition and construction work, posing health and safety concerns.

Affected market stall holders have seen alternative sites across London but are yet to find somewhere suitable, rejecting some offers due to location concerns.

On Saturday, September 26, Castle Square officially launched. 26 traders signed on for new leases while the new centre is under construction. Other businesses have moved to nearby Ash Avenue. They include AA Grocery Store, Daddy O’s, Maya Clothing and Forever Hair Salon.

It is understood La Bodeguita Restaurant will be relocating ‘nearby’ and opening in early 2021.

The 35% campaign and Latin Elephant have conducted a huge amount of research into the make-up of the area’s traders and customer base, and the individual circumstances of those affected by the regeneration. They say around 130 traders were operating in the centre and its immediate surrounds in 2018 but, according to  Delancey, only 79 independent traders qualified for the relocation scheme and only 61 applications were ‘valid’.

This figure is made up of 42 from the shopping centre, 35 market traders and two businesses based in railway arches.

Delancey says only those in direct operation of and trading from their units were eligible, and not those who traded from more than three sites or anyone sub-letting against the terms of their lease.

They maintain businesses applying for relocation needed to have a ‘robust finance record’ and rent payment history.

Funds offered to help cover the cost of relocating continue to be available – so those who have put a move on hold during Covid-19 can still access the support in the coming months.

The real test will be whether Castle Square can give traders the best of both worlds: their old customers and new business, whilst retaining something of the shopping centre’s character.

Given the challenges presented by the Covid-19 pandemic and and a drop in footfall across central London, harder times may well be ahead. This eyesore should have closed years ago…good riddance to this pile of rubbish…anyone who thinks different needs their heads testing. The area itself was a giant litter bin sprinkled regularly with anti social behaviour.

About time. So many of the protesters don’t even live locally. Trustafarian socialists who aren’t invested in the area but want to “save it”.

Finally… For how long I was waiting for that… how many years it took… CAN NOT WAIT for this ugliness to be dismantled, destroyed and disappear. What a horrible structure. I really wonder why this girl on the picture is not happy. Doesn’t she want this world to be just a little bit more beautiful and less ugly? What’s wrong with those people?

Typical comments from those that look down on the poorer folk. enjoy your investment!

it’s gutting to see so many of the interesting traders, communities and cultures pushed out by international property development money, E&C will end up like other sterile monocultural parts of London, with a couple of nothing boutiques and dry uninspiring cafes crammed under huge unaffordable investment boxes. The sure fire signs of this are neon signs, giant deckchairs and novelty urban beaches etc, things the developers and council do to try and replace all the actually weird interesting things that the developers destroy and displace.