Elephant and Castle homes could be demolished during Bakerloo extension works, TfL admits 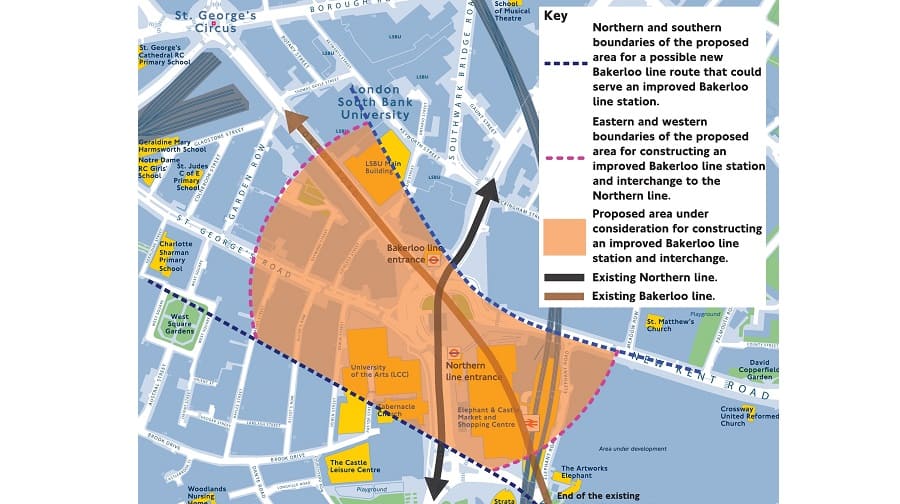 A TfL map showing the area under consideration, in which a worksite for the Bakerloo Line extension may need to be built

Transport for London (TfL) has all but admitted that property in Elephant and Castle will need to be demolished in order to build the Bakerloo Line extension.

Liberal Democrat councillors were first to notice that TfL’s consultation papers on the Bakerloo extension included details of building a “worksite”.

To excavate the new tunnels and build a new ticket office, TfL “would require land for a worksite in the area”, according to a document named ‘Elephant and Castle Factsheet’. “The area under consideration is already built up with residential and commercial land uses” the document said.

TfL would not comment on what size the land needed for a worksite would be, but comparisons have been made with the TfL worksite in Kennington Park where new Northern Line tunnels are being dug.

Another TfL document, ‘Construction and its Impacts’, said: “The land and property needed for the extension would be acquired (either voluntarily or by compulsory purchase) following the granting of the powers to build the project. The owners and occupiers of land to be acquired by compulsory purchase would be informed of the intention to acquire their interest and would have the right to claim compensation.”

It said property owners affected by compulsory purchase would be compensated, and planning permission would hope to be obtained by 2020, meaning works could clash with redevelopment of Skipton House, the Shopping Centre and the London College of Communication campus.

A TfL  map (pictured) shows the entire area being considered for the worksite, which extends to Gaywood Street and Elliott’s Row, and covers the Perronet House estate. Matthew Yates, head of transport planning and projects at TfL, told the News: “Proposals for the Bakerloo line extension at Elephant and Castle are currently less developed than other sections of the route. We have therefore shown a wide area in the proposal but this does not mean the whole area would be required. Feedback from the recent consultation [which closed April 21] will be used to shape our plans and as part of that we will aim to reduce impacts on the local community. Local engagement will continue with a further public consultation taking place before any final decisions are made.”

When questioned by  Cathedral ward councillor, Maria Linforth-Hall  council leader Peter John said at a public meeting last Wednesday, April 19: “I do not foresee the council agreeing to any proposal which would put Perronet House or any other council housing or green space at risk. There will be disruption, there’s bound to be… But I’m with you 1,000 per cent that that should not be at the expense of council housing.”