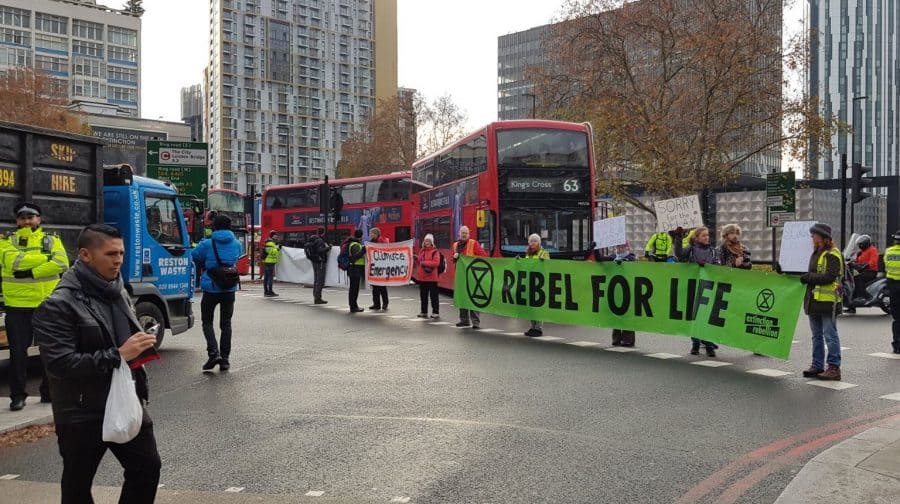 The protestors caused severe disruption to traffic around Elephant and Castle this morning and action is still ongoing (Image: Twitter / @prin_mills)

Environmental protestors brought rush-hour traffic around Elephant and Castle to a standstill this morning in a follow-on from demonstrations over the weekend.

Activists from Extinction Rebellion have stood in a line at the Elephant and Castle roundabout since 7am refusing to let cars past in a protest against climate change.

The action is still ongoing at the time of publication and is also planned to take place tomorrow.

However, protestors apologised for the inconvenience, holding up signs saying: “Sorry! We won’t be long.”

A spokesperson for the group said the group offered its “sincere apologies to members of the public who have been affected” but said it was relatively minor compared to the disaster of climate change.

They added: “We have informed the police, and will of course allow emergency vehicles to pass.” Action is also expected to carry on tomorrow and on Friday

The direct action divided motorists with one tweeting: “To the climate change protesters who blocked South London this morning and left me sitting in a traffic jam en route to the Elephant and Castle and not moving for 30 minutes – up yours. That is all.”

Activists from the group are also reported to have blocked traffic over the Lambeth and Vauxhall bridges, alongside other action at Tower Bridge and Earl’s Court.

Extinction Rebellion said 100 of its activists are taking part in today’s action.

The group is demanding legally binding policies to reduce carbon emissions to net zero by 2025 alongside a national ‘Citizens’ Assembly’ to oversee the radical green changes. The action comes on the back of protests by the climate change activists on Saturday, which saw many of London’s major bridges blockaded.

Met spokesman Supt Waheed Khan said of Saturday’s protest: “The demonstration is having a direct impact on others across London who wish to go about their daily business – and the emergency services from using the bridges to travel around London.

“Given that the organisers failed to engage with police prior to the event, we were unable to work with them around their plan and to make considerations for other Londoners.”

All were released later that day under investigation.