She's had a number of 'mind-blowing' firsts recently, including standing on the flats of her feet unaided 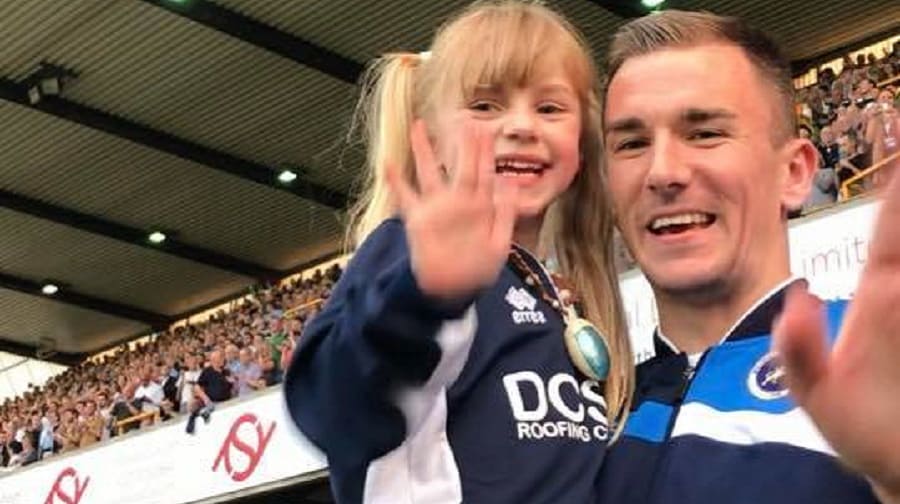 A six-year-old Millwall fan’s dream to have “legs like her friends” is well on its way to becoming reality following successful surgery partly-funded by Lions supporters.

Ellice Barr was just 22-months-old when she was diagnosed with diplegic cerebral palsy.

Her family started a £65,000 fundraiser last year for little Ellice to have a selective dorsal rhizotomy operation – which is not funded by the NHS – to reduce the spasticity in her legs.

The successful operation in July means the footie fan is now experiencing a number of firsts, including standing on the flats of her feet for the first time.

Eventually her parents say that she will be able to walk as well as anyone else – and finally achieve her wish of being able to run, jump and climb with her friends. Dad Joe Barr, 38, told the News: “The surgery was a huge success – her development is exactly in line with what we expected at this stage.

“It’s still going to take a couple of years before she’s out and about.

“She’s done so many firsts, standing there with her feet flat – that was mind-blowing!

“It’s a massive marker in her progress.”

Ellice will be having more surgery in the New Year to lengthen her calves, putting her feet at a 90 degree angle, making her on course to walk as well as someone without cerebral palsy.

Joe, who lives in Deal, Kent with the rest of the family including mum Amy and son Jay, explained: “When I was at Great Ormond Street Hospital they said her future will be walking unaided with just an inset in her shoe.

“And it’s the fundraising and donations that’s helped our daughter have a future walking unaided.

“We can’t describe how elated we are.”

The Millwall season ticket holder paid tribute to the fans who helped fundraise for Ellice’s operation, saying it couldn’t have been possible without them.

“The support from the London area, particularly Millwall fans has been absolutely amazing”, he said.

“The support she’s received has been massive.

“That part of London has always supported my little girl so we’re well chuffed.” There’s no chance of little Ellice changing her football allegiances any time soon, either.

Dad Joe was telling the News how the six-year-old was as “mad keen” for football as she’s ever been – when she interjected and said: “Jed Wallace is my hero!”

The midfielder has formed a close bond with the little girl after reading about her plight on Twitter, and has previously taken the family on a tour of The Den.

The family said they are going to be at the next Millwall home game on Saturday November 24 – and urged fans who helped fund raise to say hello, so they can express their thanks.

“If anyone sees us and they want to have a word, please do stop us and say hi!” said Joe. “That way we can say thank-you.”

You can keep updated with Ellice’s journey by searching ‘Ellice’s Wish to Walk’ on Facebook or Twitter.