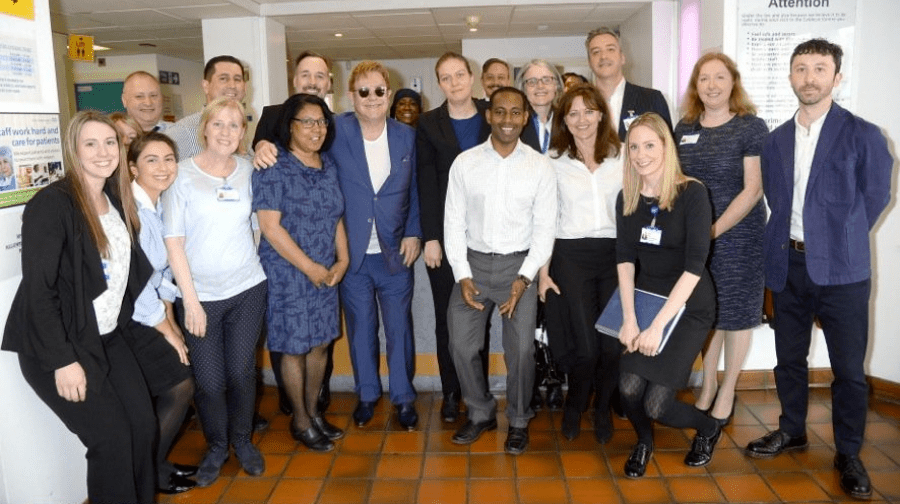 Elton was joined by David Furnish as part of the Elton John AIDS Foundation to mark the start of a drive to reach 34,000 Londoners in just twelve months.

Speaking of the launch of the programme, Elton said: “23 years ago it was my privilege to open the Caldecot HIV Treatment Centre at King’s College Hospital.

“At the time, there was so little that could be done to prevent the sickness and death caused by HIV/AIDS, or to ease suffering and prevent infection. It was heartbreaking.

“So it’s incredible to think that today King’s can introduce something which not only stops people becoming sick needlessly, it prevents new infections and saves precious resources.

“I’m deeply proud that my Foundation has been able to support King’s in this endeavor and to see a British hospital leading the kind of innovation that will get us to an AIDS free future.”

The new process launches this summer and will see routine HIV screening of all patients requiring a blood test while presenting as the Emergency Department.

Those who test positive will be referred to the dedicated HIV department for treatment. Those who do not wish to be tested will have the opportunity to opt out at the point of testing.

Dr Cyril Noel, Consultant in Emergency Medicine, said: “We’re extremely grateful to the Elton John AIDS Foundation for the grant that has allowed us to implement universal HIV testing.

“Lambeth and Southwark have some of the highest levels of HIV in the UK. There’s no reason why people should get sick or die from HIV, and one of the most common reasons they do is because they don’t know they have the infection. Universal testing is a significant step in addressing this.”