A petition, also calling for an immediate end to estate demolitions, has gained more than 700 signatures 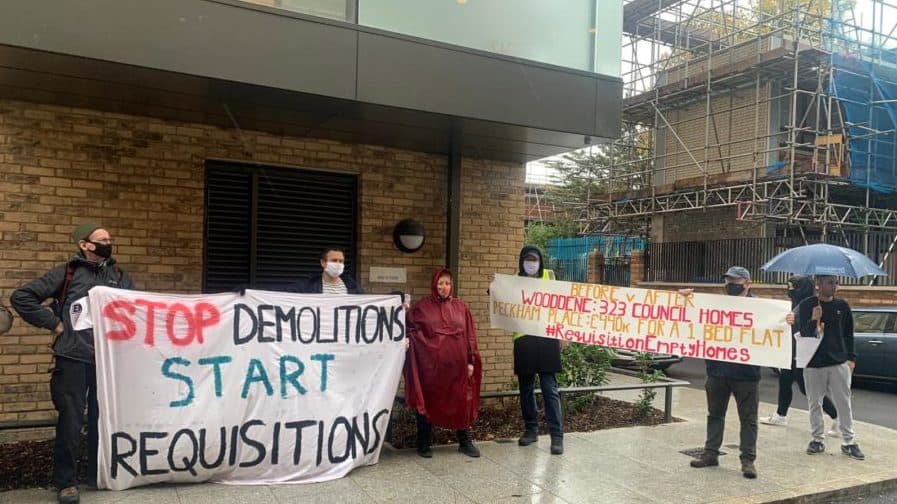 Demonstrators outside the new Peckham Place development on Saturday 31 October

Peckham Place is the redevelopment of the former local authority Wood Dene block, whose 323 homes were demolished in 2006.  The new site was only completed last year.

The development includes 54 units at ‘affordable rent’, that is anything up to 80 per cent of market rent, 201 for shared ownership, and 78 for private purchase. At least 38 homes are still listed for sale. £440,000 is the price tag for a single-bed flat.

People Before Profit, and Southwark Defend Council Housing organised the weekend’s protest, which has been backed by a coalition of groups including Southwark Group of Tenants Organisations, Southwark Travellers Action Group, Rodney TRA, Alvey TRA and Southwark Law Centre.

The group say the pandemic has shown just how deadly overcrowding and housing shortages can be – leaving people unable to self-isolate properly.

Tanya Murat, Southwark Defend Council Housing’s chair, called for the council to step in and requisition the flats, describing Peckham Place as like a ‘ghost town’.

A petition, also calling for an immediate end to estate demolitions, had gained more than 700 signatures by Tuesday.

Campaigners have taken particular aim at the ‘bail-out’ given to Notting Hill Genesis (NHG) over the beleaguered Aylesbury Estate regeneration.

In July, the News reported that a landmark deal had been reached between Tooley Street and NHG, whereby the local authority would pay £193 million to buy 280 homes planned for Aylesbury’s ‘package A’ site, slated for completion in March 2012, for social housing.

Under previous terms these would have been sold privately or let for ‘intermediate’ rent, but the council was able to take over the ownership due to changes to its borrowing cap and City Hall funding from Sadiq Khan.

But campaigners have pointed out that despite more social homes being good news, it comes at a huge cost to the taxpayer and benefit to NHG.

Ms Murat told the News last week: “On the Aylesbury Estate Southwark Council has thrown hundreds of millions at the so called “regeneration”, bailing out Notting Hill Genesis.

“But NHG is a developer not a housing association, and it would rather have homes lying empty than rent them out to local people at council rents.

“Instead of supporting NHG, Southwark Council should requisition these empty homes to house council tenants.”

Both the council and NHG have denied ‘bail out’ claims – saying the Aylesbury build was on track before the agreement was reached.

Along with contending with escalating buying prices and spiralling rents, the number of properties being marketed as luxury AirBnBs across Southwark is also reducing supply.

Around Elephant and Castle there are at least 40 AirBnB flats including on the site of the demolished Heygate and other former council homes – a problem campaigners fear could arise in Peckham Place.

In a response to the News’ request for comment, a Notting Hill Genesis spokesperson said: “There are many residents and families already enjoying the homes and growing community at our Peckham Place development.

“Our social homes are already fully occupied and we have welcomed former Wood Dene Estate residents who wished to return, as well as residents of the nearby Aylesbury Estate.

“The private sale and shared ownership homes that are on the market are proving popular and we are making good progress towards full occupancy.

“There are still a number of homes that have not yet gone to market but when that happens we expect them to prove very attractive too.”

Southwark Council did not respond to our request for comment before going to press.

Whose regeneration?
Thousands of homes at Aylesbury where price of demolition = price of refurbishing sold to the “private sector” in not clear operation.
Canada Water the rich and the poor are segregated by income and all the facilities are being piled on top of the flats for the rich without parking perhaps to make them sellable!
This as you know is against the London Plan but it is OK for Mr. Khan and then leader Peter John if British Land PLC does it!
Even the leisure centre is being moved 50 meters at a cost of 35 million when refurbishing would only cost 8 million keeping a better and more expensive pool on a better site. Even the Council in their original documentation oposed this project without hesitation.