'A night of football at the Bodeguita. The happy moments and the tears. Tonight may be the last night.' 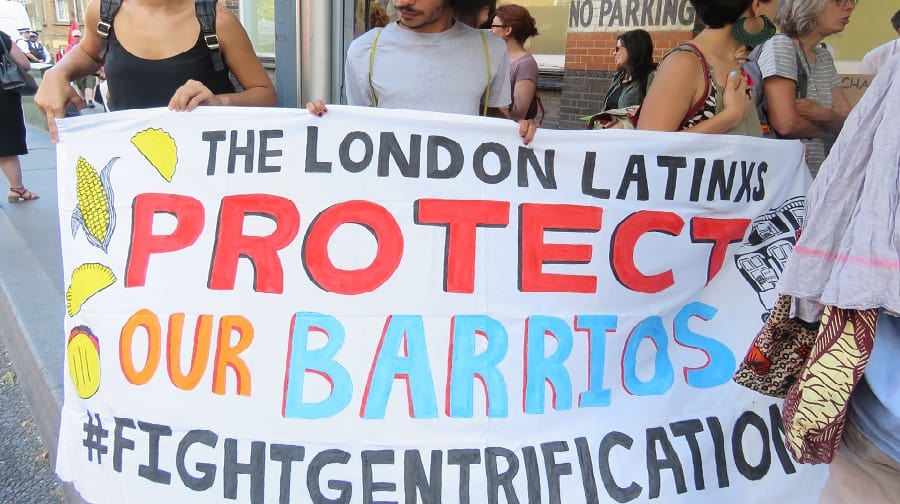 Elephant & Castle Latin American community were left reeling on Tuesday night with a double-blow; the plans to demolish the shopping centre were given the green-light by the council and inside a crowded Bodeguita restaurant, the area’s Colombians witnessed their defeated at the hands of the English football team.

Speaking to the News the morning after, Councillor Maria Linforth-Hall re-affirmed what she had told committee members at last the vote, as she made a formal objection to the scheme.

Although not opposed to the Elephant and Castle’s regeneration in principle, saying the shopping centre was infested with rats and mice and in a state of disrepair, her key concerns are the impact new buildings including multi-storey tower blocks will have on existing housing, and the impact on traders displaced while the centre is knocked down and rebuilt.

“I think that the Elephant and Castle needs to be replaced in any case, but my big concern is the traders.

“But traders at the moment are in limbo. None of the places that have been allocated for them are available now, with planning permission for the proposed Peronet House site still to be decided and the temporary traders units also still under consent.

“The only place available already is One Elephant – which has seven units. It is minuscule.

“There is a lot at stake for the Latin American community and whether they will keep the clientele they have built up over the years.”

Delancey confirmed in last night’s meeting that a Latin American community centre on Pastor Street would be part of its new regeneration deal.

But this will not be in place until the existing shopping centre has been demolished and new London College of Communication site built – in about nine years’ time.

On Tuesday night Colombian fans flocked to La Bodeguita to watch the World Cup match against England, and Cllr Linforth-Hall penned a tribute to the condemned centre:

“For me and for many the day that this happens is going to be the end of an era. Nothing will be the same after,” she wrote.

“The elephant is community at its best. It is home, fun, is everything. I know the people behind the business, their lives, and their achievements.

“Many are my dear friends, all under one roof.

“There does not seem to be any understanding of what goes on behind each business, and behind the lives of every trader. For the great majority demolishing the centre will take away their livelihood, their savings and their dreams.

“Lulo juice with empanadas in La Bodeguita, having my pedicure and manicure at Maritza’s, doing some shopping, seeing some friends, having a chat and a laugh, this is the best time of my week. A night of football at the Bodeguita. The happy moments and the tears. Tonight may be the last night.

“I will always be here for you, if you need me.”

Amazing turn out at our demo defending the Elephant tonight!!!

Massive love to you all ???

Up the Elephant!
No community stitch up! pic.twitter.com/feMVMkcQJM

“There is still a long way before final approval of this controversial scheme.

“The application still needs approval of GLA, and we will continue to advocate for a better deal for all the communities of #ElephantAndCastle.

“If it were not for a strong and united campaign we wouldn’t have gained the concessions we did from 33 to 116 social housing units, a relocation fund, a total of 10 per cent affordable retail space and a traders panel.

“Despite these gains there are many more things to iron out.

“We are extremely worried about the loss of affordable commercial and cultural spaces for the many traders, users and costumers of Elephant and Castle shopping centre.

“It is extremely worried that to date only 411 square metres are available for relocation of current tenants of the shopping centre and less than 1,500 square metres will become available by 2019.

“Currently traders occupy approximately 4,000 square metres of floor space in the shopping centre, so it is utterly frustrating to think of the subsequent displacement and loss of a valued place for many Latin Americans and black and ethnic minority (BAME) groups in London.

“Together with many other local groups, residents, LCC students, local councillors and campaigners, Latin Elephant will continue to fight for a fair and inclusive deal for all BAME and Latin American traders who make Elephant and Castle our home.

“We might have lost one fight, but not the battle! Se pierde una batalla pero no la lucha!”

Despite the double whammy of bad news, Elephant’s Colombian community was out in force with a party atmosphere during the match, and it appeared many spectators at the planning meeting were keeping up with the score on the sly, as on several occasions the game was accidentally blared out devices that had failed to be put into silent.

Despite Colombia’s loss there’s a party atmosphere around Elephant and Castle station. Had some fireworks, music, and Colombian flag coloured smoke bombs pic.twitter.com/Q8P5plidDY