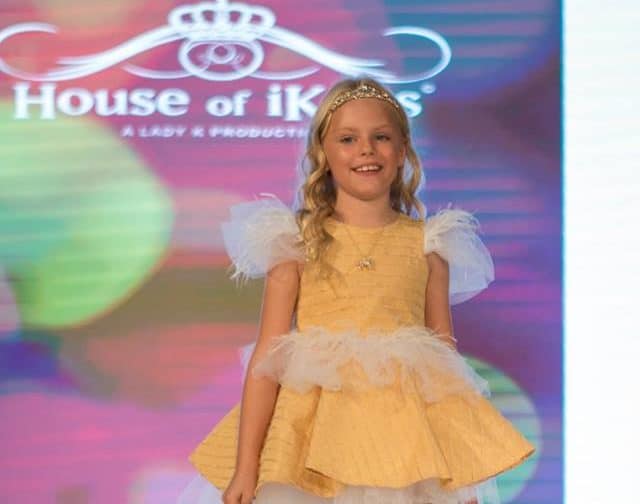 Amy Lee, 8, is now strutting her stuff on the catwalks of London and New York fashion weeks after life-saving surgery at the local hospital Image: Rodolfo San Juan

A child model who had life-saving surgery at the Evelina London Children’s hospital is now starring on the catwalk at New York and London fashion weeks.

Amy Lee, 8, was only four months old when she fell seriously ill on Christmas Day.

She was rushed to the Evelina, part of the Guy’s and St Thomas’ Trust, and spent over a week on life-support in the paediatric intensive care unit.

Doctors diagnosed little Amy with patent ductus arteriosus (PDA), a hole between her aorta and pulmonary artery which causes too much blood to be delivered to the lungs. Amy pictured with doting mum Jennie during her life-saving operation

If untreated, it can cause permanent heart and lung damage and become life-threatening.

Doting mum Jennie, a sales rep, said: “It was the worst time of my life. I was beside myself with worry and seeing her tiny body hooked up to the machines was dreadful.

“The nurses on the unit were absolutely brilliant and the doctors helped to put me at ease by explaining what they could see on the scans and how they were going to treat her.”

“Evelina London was amazing, without them we might not have her. Everyone from the cleaning staff and the receptionist to the clinical team were just so friendly and lovely,” said Jennie, who lives with Amy in Grinstead, Sussex. Now Amy, who has previously starred in ads for Lidl and Sainsbury’s, has made her debut at New York Fashion Week and strutted the catwalk at London fashion week on Sunday (February 17).

She modelled clothes for the children’s tailor and fashion designer Krissie Colton and her brand ME Clothing.

“I’m was very very very very excited because it’s my favourite thing to do. My friend went to watch me in New York and I have friends who do it with me in London,” Amy said. Amy, pictured on the catwalk at New York fashion week earlier this month

Mum Jennie added: “When Amy’s modelling she’s in her element and has a beaming smile on her face, I am so proud of her.

“To look at Amy you would never know the struggles she’s been through. She has autism and a cataract in her left eye but she hasn’t let anything stop her from doing what she loves.”

Dr Aaron Bell, a consultant paediatric cardiologist at the hospital, said: “It’s wonderful to see how well Amy is doing and I wish her luck in her modelling career.

“She is a great example of how our life-saving treatment is helping children to go on and live a healthy life.”