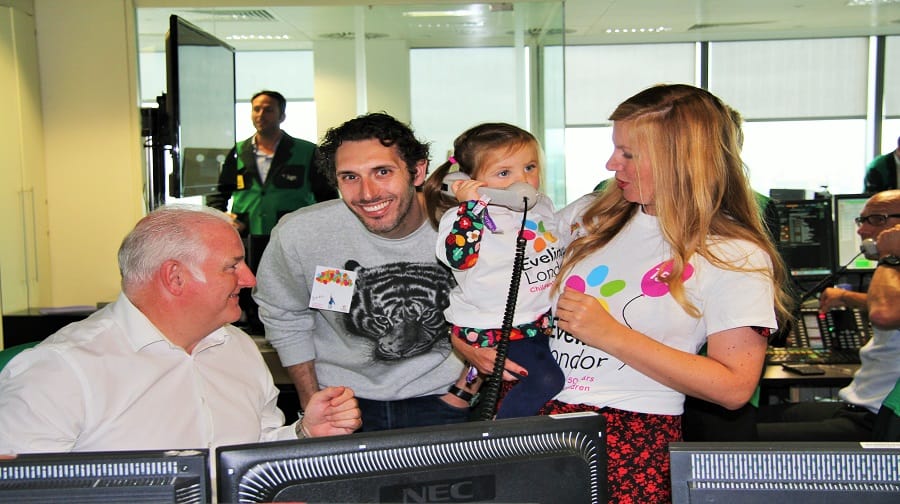 TV presenter and Strictly Come Dancing star Dr Ranj, and actor Blake Harrison, known from the hit TV show The Inbetweeners, were among the stars that joined brokers on the trading floor in London for the annual BGC Charity Day, to commemorate the lives tragically lost in the World Trade Centre attacks in 2001. Two-year-old Evie Cox, from Margate, was diagnosed with multiple complex heart defects whilst still in the womb. Evie underwent two open heart surgeries and multiple procedures before her second birthday to mend her heart.

“It was really exciting to be part of BGC Charity Day. Evelina London means so much to us and getting involved was another way of thanking staff for caring for our daughter Evie” says Evie’s mum, Jo.

Five-year-old Cruz Brown, from London Bridge, has a rare kidney condition and has been an Evelina London patient since birth, visiting the hospital three times a week for dialysis.

His mum Debbie said: “We loved being part of the BGC Charity day to raise funds for Evelina London and all those that have been there for Cruz every step of the way.” Arthur, from Bromley/Orpington, has just had his first birthday and has spent over a quarter of his life so far at Evelina London with multiple respiratory problems.

The support of corporate partners, fundraisers and celebrity ambassadors, will make the hospital even better for patients and their families, improving facilities, undertaking life-saving research and buying the latest medical equipment.

To find out how Evelina London will be celebrating its special birthday, visit www.evelinalondon.nhs.uk/150.

To support or donate to Evelina London visit http://www.supportevelina.org.uk/ or text ‘Evelina’ to 70800 to donate £5