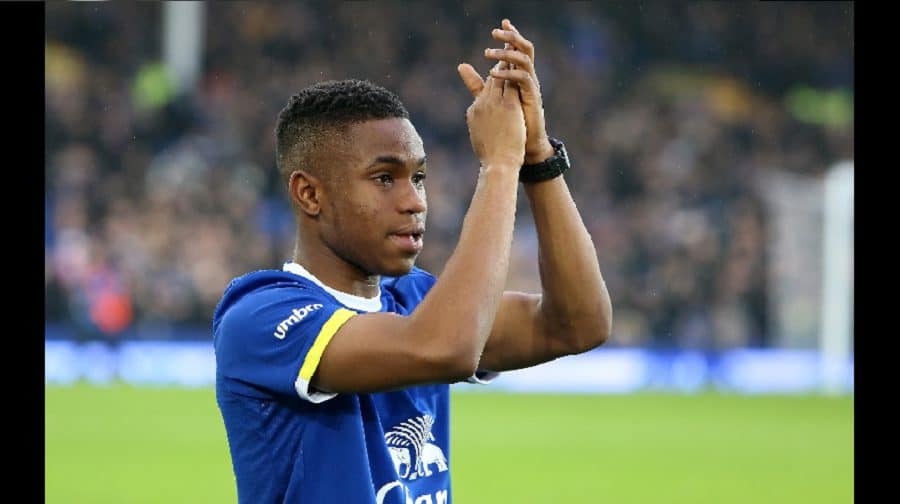 Ademola Lookman on the field in his Everton shirt

A St Thomas the Apostle ex-student who has charted a meteoric rise to success at Everton Football Club has made all of his old teachers at the school “incredibly proud,” writes Kirsty Purnell…

Ademola Lookman, now nineteen, was sixteen-years-old when he was first scouted by Charlton during a London FA Under-16s match in Sparrow’s Lane. Now he has been transferred to Everton for £11m.

Just three years on, Ademola has been signed by the Premier League outfit and scored his first goal for them in his debut match against Manchester City on Sunday.

Ademola’s old PE teacher at St Thomas the Apostle, Ali Young, praised the young winger’s sporting abilities. “He was a standout footballer in his year group and a standout sportsman. He was a good all-rounder – he was a top performer in a number of sports but obviously, football was his best,” he said.

As well as excelling in sports, Ademola was academically gifted, achieving four A*’s and five A’s in his GCSEs.

“I remember him being in school until 6pm every night revising for his GCSEs,” said Mr Young. “It didn’t really matter what he was doing, he would be one hundred per cent dedicated to it. He was deputy head boy, too. He was a model student – both sports-wise and academically.”

Mr Young said that Ademola’s across the board achievements has sent a positive message to younger students: “He’s a shining example of how you can be good at both sports and academic studies.”

Ademola left St Thomas’ in 2014 after his GCSEs and went to play for Charlton but still pops in to the school to see his old teachers.

“He is a really humble, articulate and intelligent young man,” said Mr Young. “We’re all incredibly proud of him. Myself even more so – I’ve been a lifelong Everton fan, so watching him score on Sunday was brilliant for me,” he said.