Everything you need to know about today’s Bermondsey Carnival 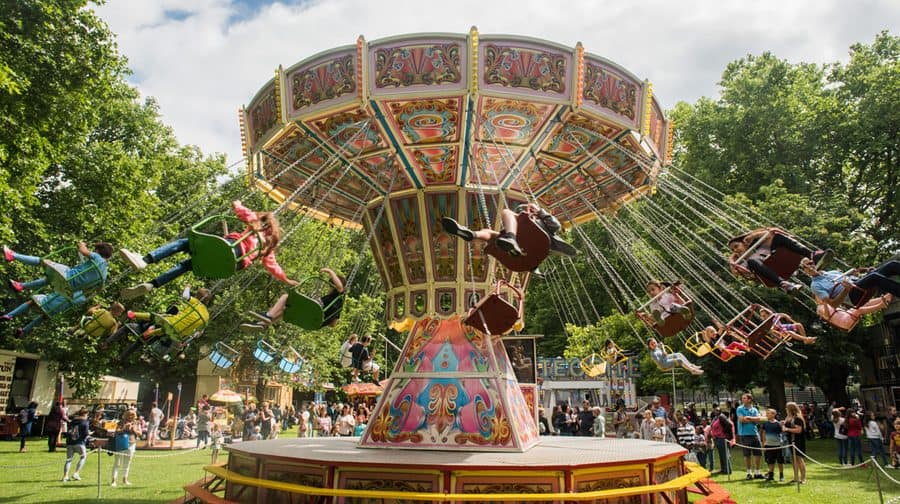 The Bermondsey Carnival will bring an exciting line up of music, dance and events to the bandstand of the beautiful Southwark Park, writes Simon Throssell …

Festivals in Bermondsey date as far back as ‘A Fête at Bermondsey or A Marriage Feast at Bermondsey’, reimagined by Flemish painter Marcus Gheeraerts the Elder (below).

The Bermondsey Carnival first came to town in July 1900, as a fundraising event for the Daily Telegraph’s war time ‘Widows and Orphans’ support fund during the Boer War (1899 – 1902).

For nearly 120 years, the Carnival has evolved into an annual event, establishing itself in the process as a local treasure that the people of Bermondsey are immensely proud of.

It has continued to be celebrated through numerous cultural changes to the area, a host of national and local governments as well as two world wars.

Sometime in the early 1980s, however, the celebrations gradually faded away and eventually ceased to be.

But, on a late summer’s evening at The Ancient Foresters pub, two local residents reminisced about the good old days of the Carnival. And, after receiving support from The Friends of Southwark Park and later Bermondsey Beat, the Carnival was back on the agenda. The programme for this year’s Carnival, taking place on Saturday, June 30 from 12:00 to 8:00 pm, includes plenty of activities and performances to entertain the whole family, including a traditional funfair, delicious world foods, and fun activities from community partners plus a dedicated family zone and children’s dance tent running throughout the day:

Promoting and celebrating the colourful Latin American culture by offering free entertainment for all so bring your costumes and join in the dance workshops!

Rumble in the Jumble

A mass community-led second-hand jumble sale where you could find yourself some hidden treasures.

A Victorian-themed fun fair offering a wide range of sideshow, stalls and games old and new to keep you busy and entertained throughout the day

Fancy yourself as the next Wimbledon champion?

Bermondsey Carnival will be holding a special ‘come and try: tennis’ session for anyone, adult or child, who is interested in giving the sport a go. For the more competitive player, there will also be a ‘timed tennis tournament’ for six to eleven year olds.

Who’s on, IN THE BANDSTAND?

From midday-onwards, there will be a number of great live music performances:

Rock and roll band from Bermondsey, who have just released their debut single ‘Little Miss’

Eltham-based band consisting of six year nine students, influenced by the likes of The Beatles, Oasis and Arctic Monkeys

All-inclusive choir group singing a diverse range of genres, with experience in performing on stage at the Royal Albert Hall and at the V Festival alongside Stormzy

17-year-old singer songwriter and daughter of SE8’s finest Danny Baker, will rock the bandstand with a set list mixing covers in with her own original material

Five-piece tribute band excelling in impersonating Tina Turner and many other of the great jazz, soul, rock and blues artists of the twentieth century

Bonita Delaney and Suzanne Ayliffe, otherwise known as Frida and Agnetha, have enjoyed performing alongside Gary Jones (Bjorn) and Nigel Hopkins (Benny) to enormous crowds worldwide since the mid-nineties.

They have been to the Caribbean several times to play for Richard Branson’s Virgin parties, Portugal’s famous summer festas every year for eight consecutive years and Moscow’s nightclubs and corporate parties.

The Golden Girls love to perform the music of ABBA to the local people around them because: “You can see an instant audience reaction and a true sense of communal togetherness!

“To see everyone, young and old alike, singing along is a true pleasure.”

For an uplifting, energetic and entertaining act, be sure to head to the bandstand at 6:00 pm for a Dancing Queen spectacular.

Original star of the West End and Broadway smash hit show, the Rat Pack live from Las Vegas, Louis Hoover will be saluting to the late great Frank Sinatra at this year’s carnival.

Performing a selection of hits by Ol’ Blue Eyes, Louis is looking forward to sharing his love of music with the people of Bermondsey.

“As a special gesture and in celebration of my Birthday which will also be celebrated on Carnival day”, the Grammy nominee said, “I am offering my fellow Bermondsey residents a free download of both my albums that I will be singing from in the bandstand”

Louis’s marvellous talent has been recognised by celebrities across the world. In the words of former Manchester United manager, Sir Alex Ferguson, “if he played football like he sings, I would sign him tomorrow”.

So if you’re a fan of The Rat Pack or just love great songs, then Hoover’s Salute to Sinatra is a 6:50 pm performance you don’t want to miss!

How do I get there?

Distances from main transport hubs are as follows:

Southwark NewsNewsEverything you need to know about today’s Bermondsey Carnival