Ex-commando, 95, knighted by France for role in liberating Europe

Maurice Herron was stationed in El Alamein alongside Montgomery 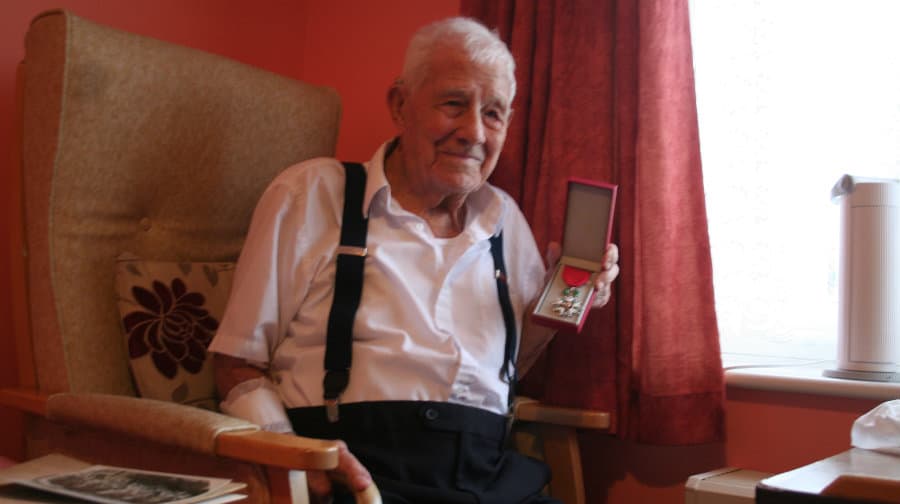 Maurice with his Legion d'Honneur medal

A 95-year-old Peckham war veteran has been awarded the Legion d’Honneur by the French government, 70 years after he was dodging bullets day and night to guard the aircraft he serviced.

Maurice Herron was just nineteen-years-old when he joined up. After training at North Wield, from where planes went to fly in the Battle of Britain, the young lad from Queen’s Road, volunteered to go on his first mission overseas.

He would go on to train to be a commando in the desert, service planes at El Alamein when Montgomery was there and take part in the liberation of Italy and Sicily.

In 1940, Maurice boarded a ship on which he would spend the next five weeks solid sailing down to South Africa.

“Me and my mate walked over to volunteer and there was a couple that failed their medical so we got in – that’s how I ended up in the desert,” said Maurice, talking to the News from Greenhive Care Home in Peckham.

“That was when the Bismarck was floating about,” said Maurice, who was taken by surprise when their boat was rammed by a French destroyer as they docked in Freetown, Sierra Leone. Asked if he thought it was an accident, he replied: “It was hard to know. At the time things were a bit dodgy with France. It was during the night and we had to fill the hole up with cement to get round to the cape and then we changed boats.”

As Lieutenant-General Bernard Montgomery led Allied troops to the oil fields of the Middle East, Maurice was servicing Hurricanes at an air strip in El Alamein.

One of his jobs was to check the air strip for land mines. With no sophisticated detectors on hand, Maurice had to use his bayonet.

“We had to use a bayonet to check for mines. You dug your bayonet in the ground and hope you didn’t hit something,” said Maurice.

“One officer lit a fire to dry his clothes, but he was over a land mine. He went about ten foot up in the air. There was a Corporal from Peckham stood behind him and he lost his arm.”

Crash landings were not uncommon as planes would come in missing their undercarriage. Maurice recalled one instance when a gunner got stuck in the tail of the plane which was on fire as it came in to land. “His tail was up in the air. The hinges started to go and the tail gunner hadn’t turned the turret around so he was stuck in the tail with the flames coming out. Everyone rushed to get him out. Later he came back and thanked everyone for saving his life.”

Maurice in his commando days

When a call came round for men to volunteer to become RAF commandos, Maurice stepped up and was sent to Israel for training. “I think the training was harder than the real thing,” said Maurice, who was then deployed to be the first on the ground to capture air strips before being stationed there to service the Hurricanes and Spitfires landing there.

Maurice and his crew were like sitting ducks as German planes targeted the airstrips and the precious planes parked there.

“There you were open to everything. They wanted to come over and destroy it so it’s not too clever. When you’ve got ten machine guns coming from an aircraft, that’s a lot of bullets falling around. The danger was more from any aircraft coming in that was damaged. There were lots of crash landings.”

American pilots used to ‘toboggan’ onto the airstrip and one nearly gave Maurice a new haircut. “He missed us by a couple of feet – right across the top of our heads. The undercarriage had come off and it was just coming at us. You never seen that until the Americans.”

Maurice and his crew used to sleep next to their aircraft with a camouflage net over the planes to try and keep them hidden.

“If one was hit and it caught fire it wasn’t very clever,” said Maurice, who recalled having to run for his life in a bombing raid which resulted in him losing his hearing in one ear.

“That was at night. I remember it started getting a bit naughty. The net over the aircraft caught fire. I took off very fast and when we got over there (to the trench), they was all there so I dived in.” A bomb exploded twenty yards away, costing Maurice the hearing in his right ear. When he later met his wife Christine and they went on their first date to the cinema, she wondered why he was ignoring her, until she realised he was deaf as a post on that side.

Maurice and Christine on their wedding day after the war

On D-day, Maurice was among the first to land in Sicily. “We landed on the left flank of the beach and set up a defence behind the sea wall.” It would take a month to capture Sicily before Maurice and his squadron made their way up through Italy.

Despite being under fire day and night, Maurice stayed in good humour. Even when he was running from bullets skimming his head, he still had time for a joke. “They (enemy planes) came right down the air strip out of the sun. It wasn’t too clever like, when you see all those tracers (bullets) across the top of you. I told myself ‘I’m glad I’m not six foot tall’.”

“When you’re young you don’t think like that. It didn’t enter our minds…..We had quite a time.”

“We used to count the planes out and count them back and say ‘We’re alright. They’re all here’.”

It wasn’t all bombs and bullets for Maurice though, who says he had “a good war.” He fondly recalls going out hunting lobsters by torch light and being treated like kings as his squadron camped out at a golf club in Durban at the beginning of his adventure.

“I’ve got good memories. I made some good friends and that made a big difference.”

When it was time to come home, Maurice hadn’t been able to let his dear old mum and dad know, who were waiting for any news of their youngest son at their home in Birchall Road. After Maurice struggled with his kit bag and a trunk, made for him by an Italian soldier, on the 36 bus, he finally got to knock on his own front door.

“My dad opened it and shook my hand. He said ‘be quiet, don’t say anything’. Mum was sitting in that big old arm chair and my old man said ‘there’s somebody here to see you’. Well that was it, the whole street was up!

“It was lovely, when I walked in it was wonderful.

“They never knew what happened. You couldn’t let nobody know, it was horrible. You could send a letter to say you was OK.

“The first letter I sent, being a bit of an idiot, I wrote everything so half of it got blanked out!”

After the war, Maurice met Christine. They married in Peckham and moved into the family home in Birchall Road with Maurice’s parents on the bottom floor and them in the middle. He would go on to have three children with Chrissie – Dick, Ted and Sally, and make a name for himself as an engineer.

“I’ve had a smashing life, a good family. What more could you ask for?”

When the French government awarded him a Legion d’Honneur  last week for his part in the liberation of Europe, Maurice was both delighted and astounded.

“It’s amazing really. Of course I was pleased, it’s nice to be appreciated. I’d forgotten all about it, it was 70 years ago!”

Southwark NewsNewsEx-commando, 95, knighted by France for role in liberating Europe