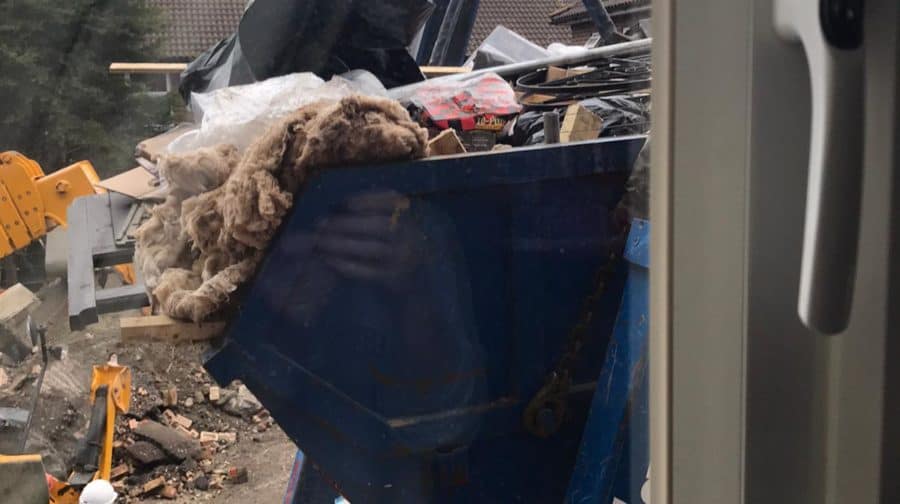 The view from one of the flat's windows

People living in a South Bermondsey block of flats have complained of their lives being made “a living hell” by “horrendous” building noise going on six days a week since last year.

The residents say the noise exceeds safe limits and is going on longer than developers first promised.

Roderick House and Antony House on Raymouth Road are being joined together by Lambeth and Southwark Housing Association (LSHA) with developers Apex Airspace, to add 30 new “affordable” homes. Two more floors are being added to the top and more flats are going between the two buildings. The work started late last year and is due to end in December 2021, if there are no delays.

Apex specialises in “airspace” development – essentially filling in gaps between or above existing buildings with more housing.

The developers secured £10 million in loan funding from the Mayor of London for the Roderick and Antony scheme. They said at the time that “rapid installation, a reduced onsite build time and minimal disturbance to neighbouring homes and communities” are among the advantages of their methods.

But some residents of Roderick House appear to disagree, in the latest example of Southwark estate additions disturbing the current occupiers.

The April brochure also said that “recently the number of complaints we have been receiving has been increasing and one of the main things we will focus on over the coming months is reducing the need for people to complain.”

Keeley Brady lives with her husband in Roderick House and said she has been there since 1987. Her husband is chronically unwell and has had two brain haemorrhages. He also suffers from severe mental health problems.

Brady took noise meter readings on April 20 which show building works reached 85 and 86 decibels. Experts generally say that long-term exposure to noise levels above 85 decibels could harm your hearing. Educational charity Noisy Planet say on their website that “sounds at or below 70 dBA are generally considered safe. Any sound at or above 85 dBA is more likely to damage your hearing over time.”

“The noise is horrendous,” Brady said. “We’re not getting [any] respite from it. They should have moved us out. We shouldn’t have been left to live on a building site.

“It’s made our lives a living hell. All the noise is doing my husband’s head in. I’m his carer and I’m at the end of my tether at the moment. I’m worried that he might do something to himself.”

The March LSHA email asked Brady to “continue to bear with the contractors as the piling, causing the noise and vibration will subside by next week.” But she said the noise is still going in late April.

Videos taken by Brady and her husband show diggers and other heavy machinery operating right outside their window.

Brady told of one hair-raising incident where her mother, who also lives in Roderick House in a separate flat, was feeding her grandchild, when one of the lorries on site allegedly clipped a windowsill when trying to hoist some equipment – causing her to jump up and move to the other side of the room.

Most of the tenants were given money as compensation for the disruption caused by the building works. Brady and her husband were not considered eligible because their flat is not on the top floor or the ground floor and they have not had a window relocated.

Kathy Ibrahim, another resident, said she was given £1,500 in compensation because she lost her garden to the work. But she is also very unhappy with how the building work has affected her life.

“We just don’t get [any] rest,” said Ibrahim, who has lived in the block for some eleven years. “Sunday is the only day we can get a lie-in and I can’t because I’ve still got to make Sunday dinner. I’ve had enough – it’s not doing my mental health any good. What they told us they were going to be doing and what they are doing – it’s a load of rubbish.

Ibrahim said her granddaughter, aged twelve, has cancer and uses a wheelchair to get around. “But she can’t go [anywhere] now. It would be nice to go out in the garden and have a barbecue, especially when it’s nice.”

Brady added: “We’re in the middle of a pandemic. We can’t go out, we can’t open our window or anything like that. You’re just carrying on with this building work as if we don’t even matter. It’s just ridiculous – I don’t know what to do.”

A spokesperson for Apex Airspace said the worst of the noise should now be over. They added: “Apex Airspace are delighted to be working in partnership with LSHA to provide 30 much needed affordable homes in this innovative way – through the provision of airspace flats built off site.

Its been similar for tenants living in Hothfield place, SE16, the works have been going on for 10 months right outside their homes with no let up, its reported to British land the developers and southwark council they are rude and do not care, their health and safety is worrying and their promises to keep dangerous materials covered is not being done