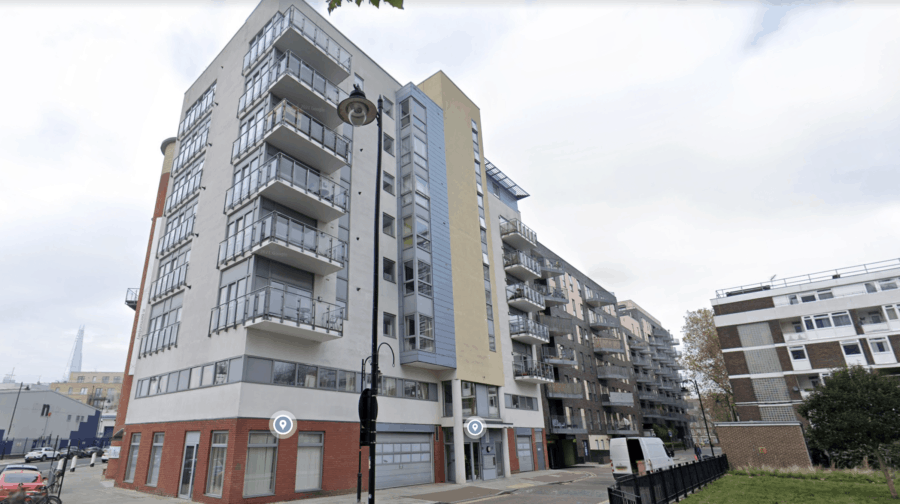 A homeowner whose Bermondsey Spa flat was repossessed after he was unable to sell it due to cladding delays says he was eventually left with just £6,000 from the sale of the £680,000 property.

John – not his real name – told the News he was scared telling his story would impact on his career and the business he had set up.

He had bought a 25 per cent stake in a shared ownership flat in Davoll Court a decade ago with a friend.  At the time, entering into the scheme was the only way they could afford to get on the property ladder.

But after his co-owner moved abroad for work the relationship soured and he claims she refused to continue paying her share of the mortgage.

After shouldering twice the cost for several years, eventually he was incapable of continuing and began to fall into arrears.

He says that despite having a perfect record, and paying his share on time, Hyde refused to give any leniency for the difficulty of his situation and instead began to pursue aggressive action.

“I was taken to court by Hyde and they gave me three months to sell up and clear the debt or, I was told, it would be repossessed. This was in 2019. We found a buyer and then the day it was meant to be signed off I was told by Hyde that the buyer’s mortgage provider wouldn’t lend him the cash for the flat.

“Another lender then refused also. I’d already sold my furniture by this point and was ready to move out.”

Lenders had refused to give mortgages for the purchase because the block had not yet received its EWS1 certificate; a document that confirms what fire safety remediation has been completed, including cladding removal, and that the building is now safe.

Although cladding had already been removed in the aftermath of Grenfell, national delays in these specialist surveys and a shortage of surveyors qualified to conduct them have left homeowners in limbo.

“The courts ordered me to sell but they may as well have told me to grow wings and fly,” he said. “We were physically incapable of selling it.”

In the meantime his arrears and interest were building up, he was put on furlough during the pandemic, and then his mortgage provider started the eviction and repossession process – something that could have been avoided had the agreed sale not fallen through.

“All I knew was that I was at the bottom of the chain,” John explained.

“I just wanted it off my shoulders but even after the flat was repossessed by my lender I was still liable for rent and service charge.

“Hyde would not buy back my share or help with the service charge. That was not an option.”

John’s initial investment in the property had been £350,000. Taking into account the percentage share he owned and the arrears built up, along with other costs, when the sale completed around a month ago the final cheque John received in the post was a mere £6,000.

“I would never recommend anyone go into shared ownership now,” he told the News.

“It’s a first time buyer scheme and therefore there is an assumption that you can sell at some point.

“Throughout I tried to get help and find a solicitor but my situation was just so complicated there seemed to be nothing they could do.

“When I bought it Bermondsey was a perfect location for work, I had a roof over my head after renting and I saw it as an investment in my future.

“It was a big deal for me to buy a home, I’m working class and from the north coast of Northern Ireland.

“I was on furlough during the pandemic and trying to set up my own company and I honestly do not think anyone would have cared if I were homeless.

“The government needs to compel Housing Associations and building freeholders to do what is required to allow people to sell.

“They need to work much quicker as this issue has been going on since 2018.

Susan Stockwell, Hyde’s chief customer officer said: “We’re very sorry that John had his home repossessed. This was not Hyde’s action, but action taken by the lender.

“John was living in a shared ownership property and was not paying his mortgage or his rent.

“We worked very hard with him so that he could avoid having his home repossessed. However, we can’t influence the actions a lender takes.

“We wrote to John earlier this year and explained he continued to be liable for rent under the terms of his lease, even though his home had been repossessed, while the lender was in the process of selling the flat.

“We’re not the freeholder of Davoll Court and so we’re not responsible for obtaining an EWS1 form for the building.

“Additionally, we’re a not-for-profit organisation and charity and we don’t buy flats back from leaseholders and shared owners.”

Sad story. Thanks for sharing. Shared ownership is an marketing scheme to get renters to part with their savings and then get locked in as long term tenants with high service charges. It also keeps the property price of modern flats artificially high

Find myself in a similar situation in a flat owned by Hyde round the corner from here. Terrifying to know that we can’t sell our home due to the EWS1 form…. not Hyde’s fault but the government need to take swift action to stop this happening to so many people trapped in shared ownership buildings which don’t possess the necessary certification, even though the cladding has recently been done.

What an awful story to hear. John was the only innocent party in this and all these other organisations conspired against him. I bet Hyde words are hollow as they kept racking on costs. The govt needs to step in to help all those affected by the industry failures to build safely.

The housing association seems to just wash their hands of this. If the housing association threatens to retake the property – it is then and only then the lender moves in to repossess to protect the assets against their loan – the decision comes from the HA first. They also continued charging for a year of the repossession rent and service charge to the owner who could not live there or access it – I know this story. They refused to reduce or stop these charges while not giving any information on how things could be resolved. Even if the EWS1 form was not the landlords responsibly – they could have done something to support the resulting mess.