'I think it’s disgusting really, and so horrible as my kids have been crying over it' 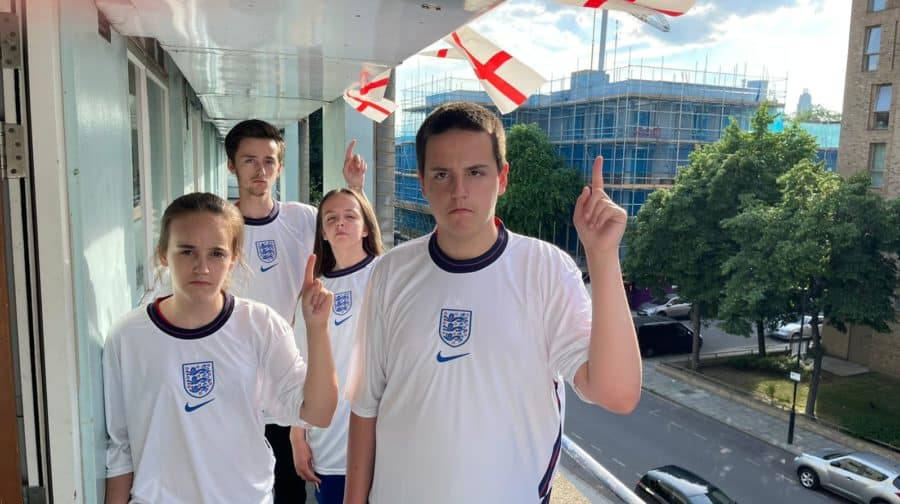 Simon's children Ashley, Steven, Ellie and Amy pictured with the flags that are 'blocking a fire escape'.

A Brandon Estate family have been left ‘disgusted’ after being ordered to take down their patriotic flag display supporting England in the Euros – asking ‘why is there one rule for the Kirby and another for us?’

Father-of-four Simon Paul said his children, two of whom are disabled and attend a special school in Stockwell, had been left in tears after he and his partner Cassandra Fairweather received a letter received from Southwark Council telling them the bunting draped outside their balcony in Morton House was a ‘fire risk’.

The family, who have lived on the Camberwell estate for a decade, said it was news to them as they have always put up a display for the football, at Christmas and at Halloween without any complaints.

“I’ve never had any letters like this before,” he said.  “They’re tiny and only from a pound shop as I couldn’t find any bigger ones so I can’t see how they can be a ‘fire hazard’.

“I think it’s disgusting really, and so horrible as my kids have been crying over it and are really excited about the Euros.”

Simon, a huge Millwall fan whose family live in Bermondsey, says he can’t believe his relatively small display has attracted the ire of council officers when the Kirby is decked out every year with no trouble.

“I have family on Kirby Estate and sometimes I’ve even helped put their flags up,” he explained.

“And I’m not even allowed to have six little ones above my head, it doesn’t make sense.” 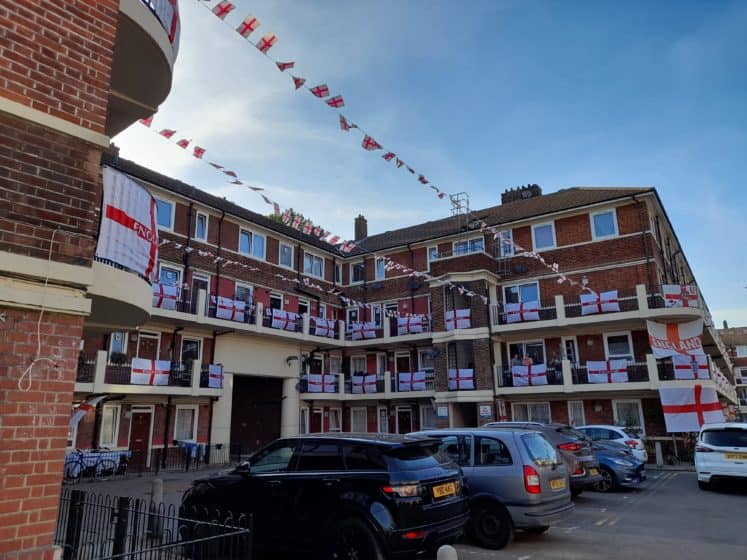 He doesn’t know whether anyone on the estate has complained about the flags, but is quick to reaffirm that for him the flag is a symbol of pride.

“It has no racial discrimination attached to it. My wider family is multicultural – half of them are Jamaican.

“What really made me boil is that when I contacted the council and said I wouldn’t be taking them down they told me they’d ‘proceed to court’.

“I put it on Facebook and it went a bit viral, I had 300 comments in no time.

“We have been through so much over the last year so let’s celebrate.

The News asked Southwark Council why the bunting was a hazard for Brandon Estate and not Kirby Estate.

Councillor Stephanie Cryan said in response: “We hate to spoil anyone’s fun and the football is such a great, positive occasion for everyone but we cannot compromise on fire safety – residents’ safety is the most important thing for us to consider.

“The fire risk assessment is unique to each building which means the advice is different in each case.

“In this building, it’s not safe to block, or partially obstruct the balconies as they provide an escape route during a fire.”

I wonder of the council would have done the same thing if it was a Palestinian flag. There seem to be many of those about in this country for some reason

I think its disgusting that we cannot celebrate different things .when we are patriotic about football , st georges day.Ifeel its one rule for one and one rule for another. Its all gone abit to far.wevare all meant to live as a community and enjoy different events and celebrations that goes on.

It’s pretty simple – put them somewhere they won’t be a fire risk!

These days people rush to get in the papers, as they’re offended at being told they can’t always do exactly what they want…

This does seem a bit unfair. Stephanie Cryan should take a look at the balconies on the Wyndham Estate Tower Blocks. SOME of the balconies have all sorts of rubbish piled up on them and that really does create a serious fire risk – as opposed to a small bit of bunting.