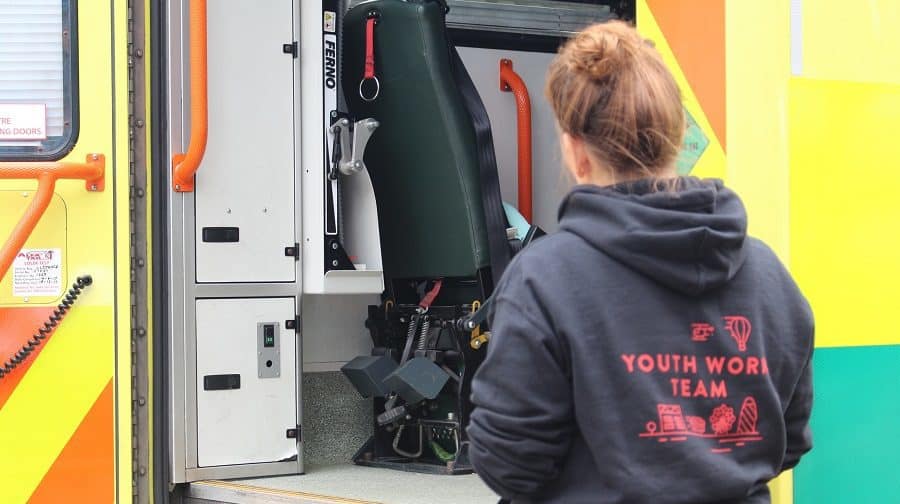 The first time George went to speak to a young victim of violence at King’s College Hospital’s trauma unit he wasn’t sure how he would be received.

At the back of his mind, a small niggling of doubt wondered whether the patient would want to talk to him – and could he really make a difference?

Two years later, every day shows him the answer is yes. If given the time, the space and the right approach, many of the children, teenagers and adults caught up in serious youth violence do want to talk.

And, for some, the conversation they have with George could be the first step out of crime, a gang, or a lifestyle where violence has become the norm.

The 32-year-old youth worker is one of six people based at the hospital on Denmark Hill working for Redthread, a charity helping young victims of violence, aged eleven to 24, to make a change.

The charity focuses on what has been described as the victims’ most ‘teachable’ moment, after the ambulance crews and trauma teams have done their critical work but before the patient is discharged.

George and his colleagues visit patients at King’s trauma unit– some of whom will have life-changing injuries – and ask one simple question: “Can I help you?”

This could be simply making a phone call or getting a glass of water. Others could spend the next few weeks or months in regular contact as they navigate their physical recovery, the justice system, police interviews or finding new housing – essentially, rebuilding their life.

Redthread cannot and does not expect to solve every problem that has led to someone being hospitalised. But it can make it more likely that they start engaging with the help that is available elsewhere and stop a cycle into further violence.

“People really value the fact that we come up to see them and that we’re not in uniform,” George explains, “it can be very overwhelming for a patient who have up to fifteen paramedics, doctors and police officers around them. They might be shouting, in pain, feeling at their lowest.

“We can bring them a cup of tea or a chocolate bar, help them make a phone call, and book them a taxi so they get home safely. We have a bag of clothes for them, as often their clothes were cut off in the back of the ambulance, as there is not much dignity in leaving hospital in a gown.”

George describes Redthread’s work as ‘trauma informed’. The extensive training he and his colleagues have affects everything from their body stance to the words they use when speaking with highly vulnerable, traumatised young people whose injuries might need long-term care.

“It’s about asking ‘is it OK if I come into this space?’ and saying ‘thank you for telling me’, rather than going in and asking ‘what happened?’, he says, by way of example.

This is part of an approach that views serious youth violence as stemming from adverse experiences in early life, and that violence spreads like an infectious disease the more people come into contact with it; meaning perpetrators are often victims, and vice versa.

“Every time an incident happens it has a ripple effect on the community, what we see in the media and social media traumatises, normalises and even glamorises what happened,” George explains, “we have to say, this is not normal. What has happened, it shouldn’t happen to you or anyone one.”

In 2017-18, Southwark had the highest number of knife crime offences in London. The summer always sees a spike in admissions, but last year was particularly violent, with a series of murders and multiple attacks in Camberwell, Kennington and Walworth. May 2018 was Redthread’s busiest month.

But although the charity has gained attention for helping young people escape gangs, these attacks are a minority. Less than half the injuries Redthread sees are knife related and, more often than not, the young victims they meet have been beaten up in seemingly random attacks.

One measure of Redthread’s success is the demand for its services. 2018 was a record year for the charity, as it expanded into Hackney’s Homerton University Hospital and opened its first bases outside London; in Nottingham and Birmingham.

This rapid expansion has called for a fundraising push. In October, Dulwich Hamlet Football Club announced it had chosen Redthread as its charity partner for the coming season. George, who was born at King’s and is a big Hamlet fan, helped bring the club on board.

DHFC’s director Tom Cullen said the partnership was a natural fit with the club’s role in the community: “Unfortunately, barely a day goes past without a report in the press about a young person being involved in violence,” he said. “This is an issue that London, especially Southwark, needs to face up to and tackle.

“Dulwich Hamlet has a proud history of community engagement and over the years, many young people from south London have been given an opportunity in our youth and first teams.

“It is therefore vital that we support the current generation through awareness of Redthread, who provide an intervention in a cycle of violence and abuse that some are facing.”

This Saturday, the club’s players will debut a specially commissioned Redthread kit which will be auctioned to raise funds, on top of raffles and bucket collections at the game against Hemel Hempstead Town.

Escalating youth violence is frightening, whether it is happening on our doorstep or elsewhere in London and the UK.

But as one young person Redthread has helped said: “The thing is, I’m so scared but deep down I know that admitting that you’re scared is about the bravest and most life-changing thing anybody can do.”