The council’s plans say up to 40% of kerbside space could be freed up, with parking spaces turned into ‘parklets’ with plants and seating. 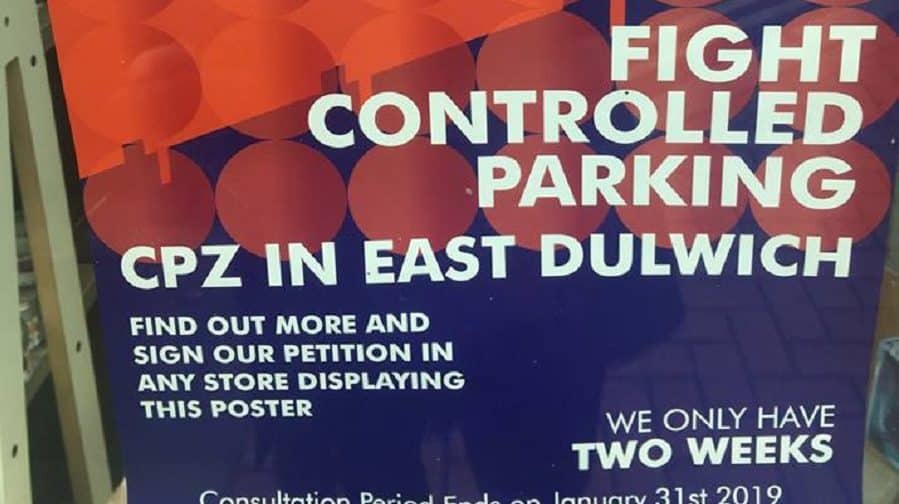 While some are in favour of anything that could tackle air pollution, congestion, and fierce competition for on-street parking, others believe the move could sound a death knell for the busy high street and its independent shops.

Hundreds of posts have now been amassed on the online East Dulwich Forum, with some still undecided as to whether controlled parking really has environmental benefits – or whether it just encourages more people to pave over their gardens and use big chain stores further out.

But perhaps the strongest views are from aghast business owners who say they are already struggle with deliveries and matters will only be made worse if they can’t get permits for staff and punters have to pay.

A petition against the proposals displayed in shops along the street is gaining traction – and is supported by William Rose Butchers.

Owner, David Isaacs, said the business had already relocated to East Dulwich from Kennington over parking problems, saying it took two years of lobbying to even get a loading bay for their deliveries.

His fears were echoed by resident Jules Parker, who told the News convenient parking meant she could shop on Lordship Lane while on the school run: “Currently parking is convenient and so I use the local independent shops regularly and instead of the larger stores further out,” she explained.

But those in favour include frustrated residents, who claim spaces are taken up by commuters travelling as from as far as Kent driving in to make use of spaces outside the overground station.

One incredulous resident shared on the forum: “In December I came across one chap, suited and booted, sitting in his Merc with the engine running whilst enjoying a bowl of cereal.

“He seemed genuinely surprised that I should object to his diesel fumes filling the street whilst he tucked in.”

Southwark Green Party’s Eleanor Margolies welcomed the move, because of ‘the benefit to the local economy and on reducing air pollution,’ arguing that ‘recent research showed that high street shops get more income from people on foot and bike than motorists.’

The council’s plans say up to 40% of kerbside space could be freed up, with current free parking spaces turned into ‘parklets’ with plants and seating.

Although a decision will not be made by the council until after consultation period ends on February 28, angry residents have complained online the scheme is being ‘steam-rollered’ as fines are a ‘cash cow’ for the council’s stretched budgets.

And Lordship Lane is not the only area that could be affected, with the Bellenden Road area also included in separate plans.

Councillor Richard Livingstone, cabinet member for environment, transport management and air quality, said all residents in the proposed areas had been contacted with information and encouraged to have their say: “We have met with and listened to businesses on Lordship Lane, and will continue these talks.

“We will of course be reviewing what we learn from both talking to people and reviewing all of the responses that we get from residents, businesses and visitors to the area, from our consultations. Both of these consultations have already been extended in response to resident’s requests and I would again invite everybody to visit our website and let us know what you think.”

I’m an East Dulwich resident & am concerned it will simply destroy the local ethos of support for small, independent businesses, & will consequently change (for the worse) the whole atmosphere of the area. I also happen to think it is a blatant cash cow, & that to effectively tax locals £125 per car per year to park in their own streets is a scandal. Another example of local councils being “inventive” in raising extra funds, under the guise (ill-disguised actually) of “improving” the local environment … I don’t buy it.