Exclusive: Families trapped by the cladding scandal say their Peckham homes ‘feel like a prison’ 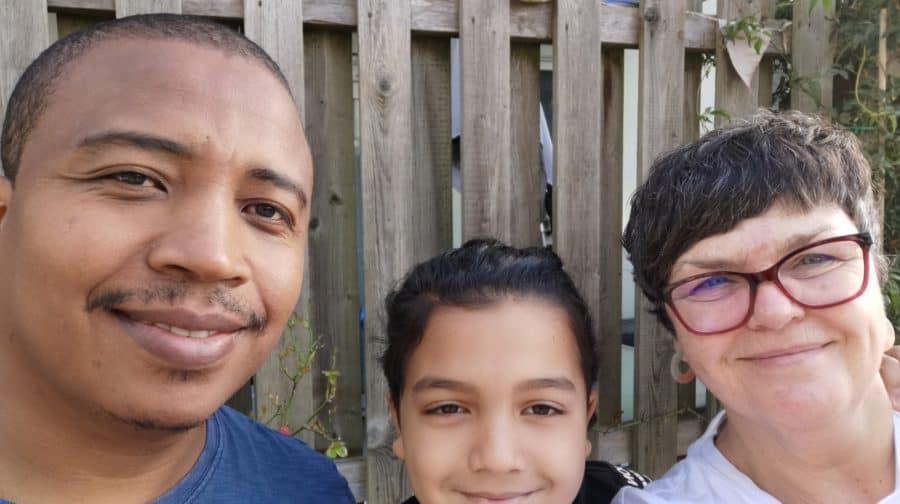 Leo, Dexter and Michelle have been unable to sell their one-bed flat in Peckham's Cooperative House and have no idea when its fire safety issues will be resolved.

Two mothers trapped in flats they cannot sell due to the cladding scandal have described how ‘all hope is gone’ after the government’s failure to protect leaseholders from further costs.

Michelle Delgado bought a 35 per cent share of her one-bed flat in Peckham’s Cooperative House in November 2007 through an L&Q shared ownership scheme.

Fourteen years later Michelle,  husband Leo, and eleven-year-old son Dexter are now stuck in the small flat, with their dreams of moving to a more affordable, bigger home with a garden in tatters.

Although some cladding on the front of the block has been removed, with L&Q stumping up for the initial costs, there is more cladding on the back of the building and further safety work required.

The cladding in question is, according to documents from L&Q, “an insulated wall system made up of polystyrene in a plastic frame with an air gap behind it and a polymer render over the whole surface. This type of wall construction only became non-compliant after government guidance was updated”.

But this time there is a question over who pays – and whether the government’s fire safety fund will cover the costs.

While the uncertainty continues, no one in the block – including numerous growing families – is able to sell.

“This is our home but it feels like a prison. And we don’t know if it’s a safe prison,” Michelle said.

The block, which is over eighteen metres, had a waking watch until heat alarms were fitted in every flat.

“There is a lot of mental stress,” she continued. “If we are liable for a £50-100k bill then that’s all the equity we have.  We need to move to a bigger property but we don’t have the money.  I’ve read about people going bankrupt and having to hand back their flats to the banks but they still can’t sell them.  There are days I wake up and feel really upset, and there are angry days, and days I can’t think about it.

“You think you’re doing the right thing and providing for your family but we’re having to move onto a sofa bed in our living room just to give our son his own room.”

Although she says communication from L&Q has been limited, they too are in the dark.

In protest at how the government has handled the situation, she and other residents have put up non-flammable banners outside the building to highlight their impossible situation.

“There is nothing anyone can do until the government fixes this,” she said. 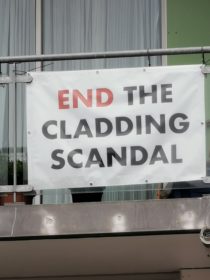 Referencing the fire safety bill, which has failed to protect leaseholders from costs, she added: “They had the opportunity to do the right thing. Boris Johnson said leaseholders wouldn’t have to pay but now they’re saying we do. You have more protection when you buy kitchen appliances than when you buy a flat. If my washing machine was dangerous it would go back to the manufacturer, you wouldn’t have to pay for it to be made safe.”

Her neighbour Eleanor Macnair, a single mum to a three-year-old, said living in the block throughout the pandemic was particularly hard; with no garden and scaffolding up for the majority of the year obscuring her view.

She bought 30 per cent of the one bed property in 2011. Around six months after her son was born in 2018 she decided to sell up and move closer to family and somewhere where she could afford a garden – then the cladding crisis hit.

“The system of shared ownership initially did help me and provided security, I was in my 30s and had been renting for so long with houses with damp, even slug infestations. My son has breathing issues and we are right on a main road with bad pollution and a family history of asthma so I wanted to move.

“Finding out we had cladding was a devastating blow but it was removed, and we are some of the lucky ones. But when I finally got the flat on the market last summer it turned out that we needed the EWS1 form and it’s unmortgageable.  And we don’t know if the further work needed will be paid for by the fund or by us.”

On top of childcare costs and her own mortgage, Eleanor described the worry is like a ‘black cloud’.

“I work so hard to create security for my son, going back to work and often working until ten or eleven at night, but what was the point of doing that if all my money will go towards paying for flaws in a building and VAT on top?  I sometimes think I should have just spent more time with my son instead of putting everything into paying for this home.

“L&Q didn’t create this problem. I do believe the government is holding things up. There is a narrative that it is done and dusted with five billion in allocated funding.  It’s like the government is gaslighting us. The hope is gone now the fire safety bill has been passed as it is.”

An L&Q spokesperson said they hoped to provide more clarity to leaseholders in the coming weeks.  “We have recently received confirmation from the government that Cooperative House is eligible for their Building Safety Fund,” they said.

“However this funding is not yet confirmed, as there are a number of further criteria that must be met first as part of the application process. We’re sorry that this means residents will have to wait longer for a decision – we will provide a full update to them in the coming weeks. The safety of L&Q residents is our number one priority.

“We are carrying out one of the UK’s largest building inspection and remediation programmes and have committed over £350 million to fire safety.

“As part of this we are not recharging residents for temporary fire safety measures such as waking watch or fire alarm and detection systems, protecting leaseholders from over £20 million in costs so far.”

Southwark NewsNewsExclusive: Families trapped by the cladding scandal say their Peckham homes ‘feel like a prison’