The cost finding temporary accommodation has spiralled for Southwark Council, as more people find themselves unable to keep up with private rents or are evicted by private landlords 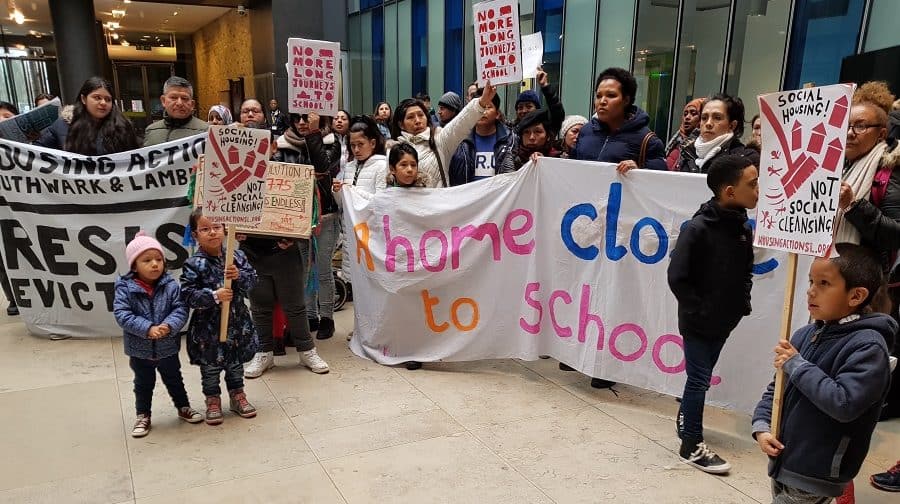 Homeless families in temporary housing forced to travel up to four hours a day on the school run staged a protest at the council’s Tooley Street offices last week.

Fifty-odd members of activist group Housing Action Southwark and Lambeth (HASL) turned out to support four homeless families at the demonstration in the council’s lobby on Thursday, February 21.

Parents say they are struggling with long journeys to and from school while living in temporary accommodation outside their home borough.

All four families have GCSE-age children. Their situation is all the more urgent as exam season approaches and they face added stress trying to revise.

Ruby, who lives in Purley with her four children, aged sixteen, ten, eight and two, says it takes the family two hours each way to travel to school in Camberwell.

“My two year old daughter has to come with us and she cries on the bus journeys,” she explains, saying her son’s hair is falling out with stress.

Ruby is one of the estimated 33,000 families nationwide who are holding down jobs, but still have nowhere permanent to live.

According to housing charity Shelter, more than half (55 per cent) of families in temporary accommodation are in work, showing the true scale of the housing crisis.

But as Ruby’s school run is so long, she has been forced to cut down her working hours, making the family’s finances all the more precarious.

Another parent, Ximena, whose family has been placed in accommodation in Bromley, says the school run takes so long her two daughters are frequently late.

As she cannot afford the train they make the journey on multiple buses, with her children often having to get off to go to the toilet on their way.

The only housing offer she has received was in Birmingham, in the West Midlands, despite the fact that she is the main carer for her elderly parents who live in Southwark.

“My mum has high blood pressure and mild dementia. My dad cannot walk too much as he has problems on his knees,” she says.

“They have been in trouble many times because my mum at middle of the night feels bad and needs to go to hospital, and they have to wait for me for at least one hour.”

HASL spokesperson Elizabeth Wyatt believes these cases prove that Southwark Council is failing on its promise to prioritise families with exam-age children for housing near school.

She argued many families could be homed in empty flats in the Aylesbury Estate, rather than being moved further outside London.

“This cannot continue,” she told the News, “Southwark council must house families in their home borough such as on the empty homes on the Aylesbury Estate. We need three, four, five bedroom council homes now.

“We know this is an issue that homeless families across London are facing and we are sure that our demands will resonate with other families.”

She claimed that each had commutes ‘under one hour’s travel’, and argued most temporary accommodation offered outside Southwark was in neighbouring boroughs.

“I wouldn’t want to see any child have their exams disrupted due to their housing situation and we are already looking to see if there’s anything more we can do to help these specific individuals,” she told the paper this week.

“We have mapped their journey times to the borough and all are under one hour’s travel time from the neighbouring boroughs they are currently living in.

“We agree that there is a chronic shortage of affordable housing across London, particularly as more homes are sold due to right-to-buy and with exponential increases in the cost of housing in the private sector, which is why the council is doing all that it can to build and secure new council housing.

“Temporary accommodation in this central London borough is indeed in extremely short supply and, in line with current policy, we always seek to do everything we can to house families near their relatives, schools and networks that they need – but this isn’t always possible.”

The costs of finding temporary accommodation has spiralled to £25.5 million a year for Southwark Council, as more people find themselves unable to keep up with private rents or evicted by private landlords, all compounded by a chronic shortage of council homes.

As the News reported in January, Southwark Council is even stuck spending two million pounds a year renting back former council homes, sold off under right-to-buy, to use as temporary accommodation.

However, longstanding heating and hot water outages on the estate may raise question marks over its suitability for any such accommodation proposals.

My sister has lived in Bermondsey her whole life with my huge family she recently became homeless with her 11 year old daughter and Southwark council sent her to live in Manchester 200 miles away from family and friends she had no other choice as she had to take it so her and her daughter had sonewhere to live. She had to take her daughter out of school (year 6) currently studying for her sats and now she is in a closed of area where the schools are half hour away! Shame on you Southwark council sending Southwark residents 200 miles away with no help