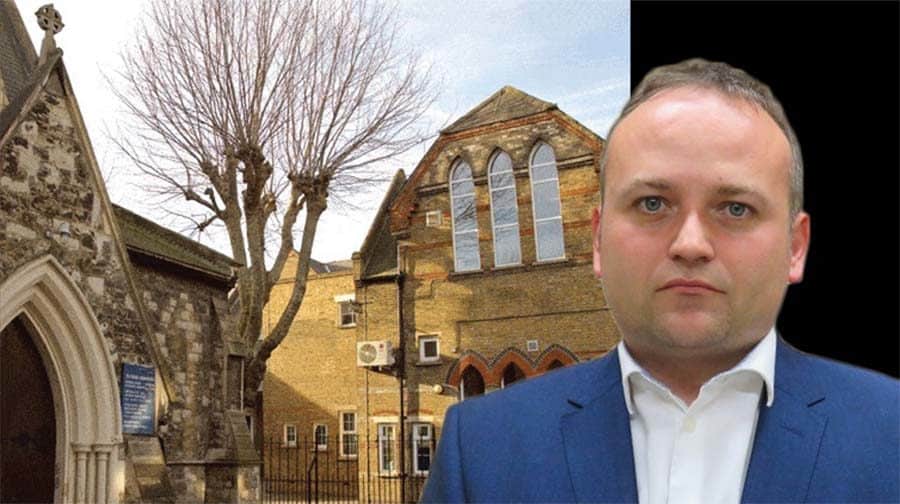 St John's and MP Neil Coyle, who has said information about schools at risk of closure or merger is a 'jigsaw with missing pieces'

St John’s Church of England Primary is facing closure by September, with parents and staff given scant notice that their jobs and school places are on the line.

Shockingly, the News has also been told by local MP Neil Coyle  that English Martyrs Roman Catholic Primary in nearby Flint Street has looked into the possibility of  merging with St George’s RC School in Westminster Bridge Road. Although the Roman Catholic diocese have yet to answer our inquiries.

The plans are a kick in the teeth for staff who have spent the last year trying to educate children in the most difficult circumstances since the Second World War. It is feared that finding new places at such short notice will be hugely disruptive to children’s education.

Although the governors at St John’s have informed parents and staff of their decision to close down and have published full details on their website, plans for English Martyrs have so far remained hush-hush and no consultation has been launched.

The main reason for the closures are said to be a serious deficit in the schools’ finances due to declining pupil numbers – in an area that has lost family-sized social housing through the Heygate and Aylesbury regenerations.

Documents published by St John’s state a decision will be made by July 12, 2021, after a consultation period from March 15 to May 14.

“The impact of this is now felt in the school’s capacity to adequately staff and secure resources to ensure a high quality of education for all children attending the school,” the papers outline.

“If the school were to remain open, a new, reduced staffing model would be required from September 2021 which the governing body felt would not enable children to continue receiving the high quality education they deserve and need.”

This comes after Southwark Council has invested hundreds of millions into new schools in the borough, consistently saying pupil numbers are expected to rise, and has even drafted plans for two new primary schools and a new secondary in Old Kent Road, where 20,000 new homes will be built.

Although St John’s has told parents Southwark Council’s cabinet support the decision to close, and are responsible for the final approval to do so by a vote, Tooley Street has tried to distance itself from the move.

Councillor Jasmine Ali, cabinet member for children, young people and education, said: “Sadly, the issue of falling rolls and the decline in birth rate is a London phenomenon, not just a problem for schools in Southwark.

“The falling number of pupils has a direct impact on funding from central government, with fewer children, less money is provided to schools.

“If schools have to close, we will step in with plenty of support for the parents and students, and all children would be offered a place in a Southwark school locally, 94 per cent of which are rated Good or Outstanding by Ofsted.

“The governors of this faith school have made a proposal for the school to close, and we await the outcome of their consultation.”

Bermondsey and Old Southwark MP Neil Coyle says the schools’ governing bodies have been influenced by a Southwark Council draft report, not publicly available, called “Approval for commencement of an informal consultation with schools, on Primary Reorganisation for September 2020”, which details schools with declining pupil numbers.

Coyle’s Freedom of Information requests to access the document have been declined due to being ‘not in the public interest’.

Separately, the News has been told more than a dozen schools across the borough have declining pupil numbers; begging the question: which schools are next?

Coyle says any evidence that numbers will decline long-term contradicts everything the council has shared until now about the need for more school places, especially in the Old Kent Road regeneration plans. It will also limit choice, cause upheaval, and leave dedicated staff in the lurch.

He told the News he would not hesitate to go to the Information Commissioner’s Office if necessary to find out what was going on.

“It is extraordinary that information is being withheld from parents, staff, and MPs that impacts on families and children,” he said on Tuesday.

“This jigsaw is missing a lot of pieces. My concerns are about how information is coming out, and what is being withheld, when jobs are on the line and children’s education is at stake.”

If English Martyrs’ were to merge, travelling to St George’s from Walworth means driving into the congestion zone, or a longer journey by bus. It is unknown whether the governing body has looked at the possibility of simply closing one of the two English Martyrs sites, or mothballing one site, until pupil numbers rise once more.

Both English Martyrs and St John’s estates would certainly provide development opportunities – and once those buildings are lost, would likely never return into public use if they were sold off.

One resident who is very involved in the St John’s school community, who asked not to be named, said staff were in shock when they found out that next term could be their last.

“The students’ education has been disrupted so much during the pandemic and primaries especially are not set up to cope with home learning,” she said.

“Our head teacher had to do all the work himself to get laptops and help families without. He is quite a new head teacher in his first headship role and has been fantastic. He has been wonderful during the pandemic and has helped turn the school around.

“There is an oversubscribed, outstanding school over the road and that could be St John’s if they gave it a chance.

“The governors and council say they can’t meet the budget because of the falling roll, but it is the regeneration of the area that has seen families move out.”

She claims parents were told the day before half term, some of whom are considering places at English Martyrs – not realising it could also be axed too.

“I don’t think the council and the diocese understand what it’s like for families.

“St John’s has a majority of pupils who speak English as a second language and also pupil premiums.

“Some parents will be worried about having to buy a second uniform.

“Teachers and teaching assistants are going to be made redundant during a pandemic.”

Ofsted inspectors downgraded the previously ‘outstanding’ St John’s to ‘requires improvement’ in 2018 after what inspectors described “a period of considerable turbulence’”.

The report noted at the time: “Standards had fallen and governors decided to replace the headteacher.

“At the beginning of 2018, a part-time interim headteacher was appointed who began a program of rapid improvement.”

The Southwark Diocesan Board of Education, the body which runs Anglican faith schools in the borough, appeared to try to distance itself from the decision to close St John’s.

Questions from the News about how and why the decision had been reached, and what would happen to the school’s buildings, went unanswered.

A spokesperson simply said: “The decision to propose the consultation on school closure was made by the school’s governing body. We are supporting the school, parents and pupils in their next steps going forward.”

The Education Commission for the Roman Catholic Archdiocese of Southwark, responsible for RC faith schools in the borough, did not respond to our requests for comments on the proposed merger between English Martyrs and their cathedral school St George’s  – and why parents had not been told this could be on the cards.