Exclusive: The pandemic’s ‘invisible patients’ – 15,000 languish on hospital waiting lists for a year in south-east London

The backlog is likely to get worse before it gets better 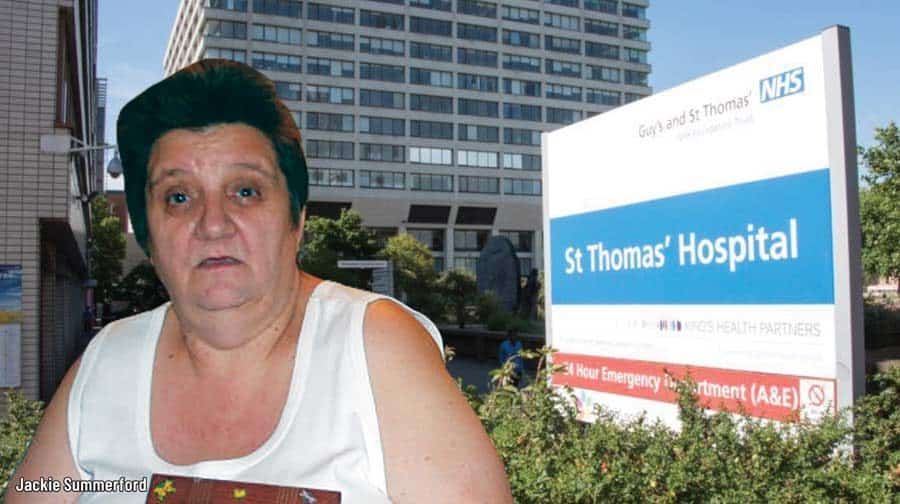 Jackie Summerford's major surgery has been cancelled twice in 2021.

Fifteen thousand people across south-east London are believed to have been stuck on hospital waiting lists for an entire year, with new data revealing the devastating impact the pandemic has had on COVID-19’s ‘invisible patients’.

Whereas much attention has been given to the number of cases, hospitalisations and deaths from the virus, the true scale of disruption the pandemic has wrought on Southwark NHS’s day-to-day work in the last year has only now been made clear.

Papers published in advance of the Our Healthier South East London Joint Health Overview and Scrutiny Committee on Thursday, April 8, described the ‘very significant’ impact the first and second waves of the virus had on hospital waiting lists across the five boroughs – Southwark, Lambeth, Lewisham, Greenwich and Bromley.

Despite overall patient numbers and referrals being reduced, the number of patients waiting more than eighteen weeks, and more than 52 weeks, has increased ‘very significantly’.

“In terms of our longest waiters, at end November there were 8,700 over 52 week waiters on SEL [South East London]  provider waiting lists – our end March 2021 position is a forecast of approximately 15,000,” the papers explain, saying this is an ‘unprecedented’ number split across inpatient and outpatient lists across all types of care; including major operations.

Hospitals hope they will be back up to 90 per cent capacity by the summer, and say ‘demonstrable and significant’ progress has already been made in increasing the number of clinically urgent patients treated each week.

Two months ago clinically urgent patients were, on average, waiting eleven weeks to be treated, whereas this figure has now been reduced to under the ‘ideal threshold’ of four weeks.

However, despite this progress, the papers say the situation is going to get worse before it gets better: “Importantly the shape of our waiting list means we then expect the post July 4 position to deteriorate further before it improves, despite the planned maintenance of our ramped up capacity.

”The scale of the challenge means we anticipate a lengthy programme of backlog reduction to clear the waiting list that has built up and this means routine patients are likely to wait significant periods of time for treatment, noting capacity is our biggest rate limiting factor.”

In January 2020, Guy’s and St Thomas’ had 13,210 patients waiting for over eighteen weeks for treatment.

Most shockingly, there are now thousands of patients who have waited more than 52 weeks – an entire year – for treatment.

Whereas there were only 100 people recorded as waiting over 52 weeks at Guy’s and St Thomas’ in January of last year, this figure has now shot up to 3,366.

At King’s College Hospital there were previously 160 patients languishing on the waiting list for a year – a figure now at a staggering 5,201.

Jackie Summerford, from Walworth, is one patient left anxiously waiting for a twice delayed major surgery.

Last year, after scans including an MRI, specialists at Guy’s and St Thomas’ discovered a mass in her womb which could be cancerous.

But despite a hysterectomy initially being scheduled for January 8 at St Thomas’,  three months later she is still waiting for a date for her operation, unsure whether she is losing valuable treatment time.

“They won’t know for sure if it is cancer until I’ve had the full hysterectomy,” she said.

“The first operation was cancelled just before the lockdown because my lungs were too weak because of my COPD.

“They told me after the operation that if I went into an intensive care ward and caught COVID I wouldn’t stand a chance.

“I was meant to go in on April 8 but a few days beforehand hadn’t heard anything so called up and admissions said it had been cancelled and they don’t know why.

“I’d psyched myself up again and now have no idea why it’s not gone ahead and have high blood pressure which could be the stress.

“They said I will hear something in two weeks about the new date. If my blood pressure isn’t alright then it could get cancelled again.”

According to the charity the Health Foundation, waiting lists are now at the highest levels since records began – at 5.6 million people and counting across the country.

Its analysis of national NHS surgery data shows that four million fewer people completed elective treatment in 2020 compared with 2019 (down from 16 million to 12 million).

Not only are fewer patients being treated, fewer are being referred into consultant-led elective care, with a drop of six million patients in the last year.

The foundation describes these millions of ‘missing patients’ as the ‘biggest unknown’, who could soon present with urgent, untreated symptoms and further fill already straining waiting lists.

Health officials are also bracing for huge demand on mental health services as the lockdown is eased and life returns back to something resembling ‘normal’.

The Centre for Mental Health predicts that up to 10 million people, around 20 per cent of the population) will need either new or additional mental health support as a direct consequence of the crisis.

South East London CCG believes this could see a quarter more people needing mental health support who do not have pre-existing conditions, and around half those with ongoing mental health challenges needing extra services for anxiety and depression.

There has already been a 30 per cent increase in children and adolescent mental health services over the last year, with referrals for those with eating disorders doubling since early 2020.