EXCLUSIVE: What to do with Walworth’s historic Cuming Collection and former Town Hall? 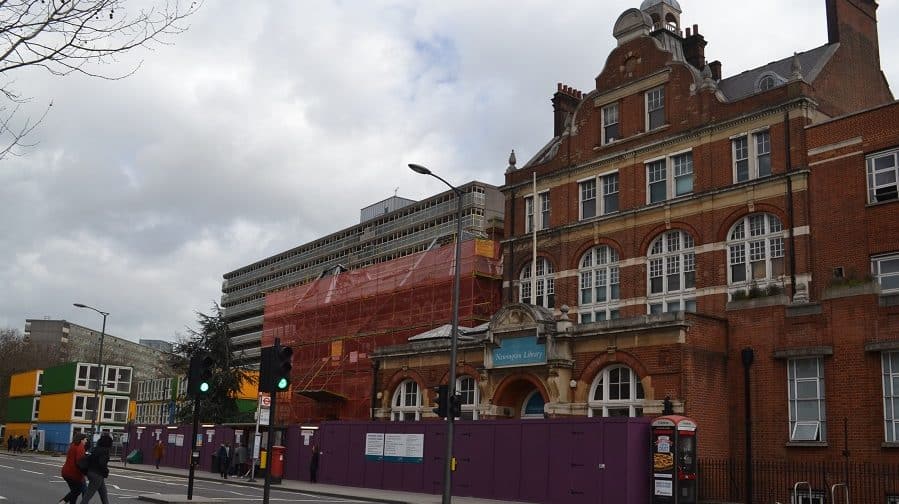 Walworth Town Hall in the aftermath of the fire

A new library and heritage centre is slated for the Walworth Road after the council announced a deal with developer Lendlease – amid on-going controversy over the future of Walworth Town Hall and the Cuming Collection.

This week the council issued a statement confirming it wants to build a library and heritage centre in Elephant Park on a long-term, peppercorn rent lease with developer Lendlease.

Southwark’s cabinet will make a final decision on the plans on January 22, after a report detailing the potential scheme was published on Tuesday.

The council says if approved, work will start straightaway and the centre will include community meeting space, computer and internet access, and heritage and cultural displays and regular events – and ‘the opportunity to showcase some of the Cuming Collection’.

The news comes after a key heritage group encouraged its members to boycott the council’s on-going consultation on the future of Walworth Town Hall, due to finish on January 21.

The council, which recently acquired the £89 million Courage Yard complex in Shad Thames as an income-generating property investment, had said fixing up the gutted town hall – expected to cost £20 million – was too expensive. Initial estimates had been at around £35-40 million.

Instead, it put the project out to tender, inviting developers to bid to take over the 250-year lease and make a profit by renting out commercial space.

As the News reported last week, heritage campaigners say the light-on-detail plans are ‘unfit for purpose’.   The campaign to keep the building public and the collection in a permanent home of its own, are now gathering momentum.

In a formal response to the council published online, the Walworth Society described the 250-year lease as ‘excessive’, and claimed it ‘speaks to a desire of the council to rid itself of these buildings’.

It described the part-privatisation of the town hall as ‘a short-sighted move given the potential of the Walworth area and the role that these publicly gifted buildings can play in helping it to be successful’.

The group believes the council could redevelop the buildings itself and still make a tidy profit while keeping them publicly owned – and providing the Cuming Museum with a permanent base.

“We would like to see Southwark Council redevelop the town hall themselves,” the Walworth Society’s Jeremy Leach told the News: “We think there is a real opportunity if it can be done for a lower amount than what the council originally thought and gain commercial revenue.

“We have what we think is an interesting idea for the future of Walworth Town Hall and we have done a lot of research.

“One of the big parts of that is keeping the Cuming Collection on display.”

The group wants to see an independent charity set up to manage a heritage and cultural space within the refurbished town hall – with commercial space rented out to raise money elsewhere in the building.

Ravaged by fire yet 98% of collection remains

Since fire gutted Walworth Town Hall, the home of the Cuming Collection, this jewel in Walworth’s crown has been left gathering dust in storage.

Six years later the collection could soon have a new base in Walworth – but the future of its former home is more uncertain.

The former town hall for the metropolitan borough of Southwark was ravaged by a blaze that broke out on March 25, 2013.

One-hundred-and-twenty firefighters battled the blaze, but the Grade II listed building was left a shell.

Despite popular misconception, 98 per cent of the museum objects displayed were undamaged, with the rest safely stored in its former archive at neighbouring Newington Library.

Although the building was in a perilous state, firefighters and museum staff heroically saved around 500 objects on display at the time, and staff hoped to be back in the refurbished building within two years.

In 2015 plans were drawn up by the council to redevelop the site, but these were quietly shelved after the budget spiralled to £40 million.

Six years later just one curator from the museum’s team is believed to still be in post.

Items from the collection have been loaned to other museums, and have gone on display at some events across the borough, but anger has grown that the museum is still left in limbo with its treasures locked-up in storage.

At the Walworth History Festival, held in September 2018, dozens of visitors all asked the same question: “what is happening to the Cuming Museum?” Both were fascinated with cultures and places across the globe, with artefacts from all over the world, leading it to be described as a ‘miniature British Museum’.

The museum is known for its rare, fully-intact nineteenth century ‘cabinet of curiosities’ and objects from the capital, charting the day-to-day lives of ordinary, working south Londoners such as toys, posters and objects found by construction workers and dockers.

As generations of children have grown up learning about Southwark’s history through the collection, which holds items of world importance, there is a huge groundswell of support for it to have a secure, permanent home.

Southwark NewsNewsEXCLUSIVE: What to do with Walworth’s historic Cuming Collection and former Town Hall?