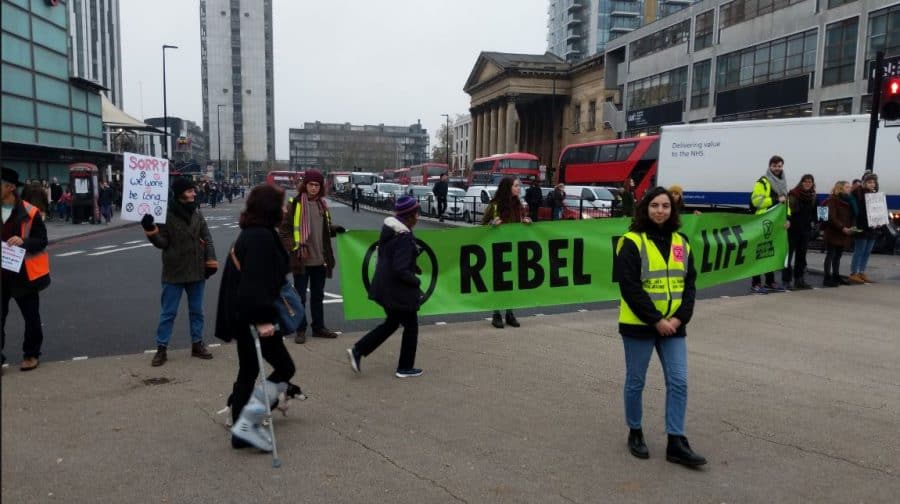 The Elephant and Castle action comes as the group prepares a funeral march from Parliament Square tomorrow (Image: Ross Bailey)

Green protesters have disrupted traffic at Elephant and Castle this morning for the third day running.

Activists from Extinction Rebellion have been standing at the roundabout of Elephant and Castle to block traffic from passing in their latest round of direct action to protest climate change.

The group is calling for legally binding action to reduce carbon emissions to net-zero by 2025.

It hit the headlines on Saturday, when eighty-two of its members were arrested for blockading some of London’s major bridges, including Southwark, Lambeth, Tower and Blackfriars.

The group uses a ‘swarm’ method of blocking traffic, telling its members to block a road, disperse when police arrive, and then block another road within the nearby area.

The protest methods have proved controversial with the public, with some commuters reacting angrily to the action.

One commuter wrote on social media this morning: “Three days these numpties have been f***ing up my commute.

“Plan on spending the weekend throwing plastic in the sea to compensate.”

However another said: “Remember that a small delay isn’t exactly hardship compared to extreme weather killing your family.”

Traffic police have warned that the ongoing action, expected to last until tomorrow, will bring delays to journeys.

Officers from Roads and Transport MPS have warned motorists not to try and drive through the protesters, calling it “very dangerous and illegal.”

The Elephant and Castle disruption comes ahead of a ‘Rebellion Day’ tomorrow, to which thousands of people have said they will attend.

Activists will walk through Parliament Square in a funeral march to “mourn all the life we’ve lost, are losing and are still to lose.”

From 10am the group will continue to blockade city streets in a bid to force radical action on the “dire emergency” of climate change.

A landmark report released by the UN Intergovernmental Panel on Climate Change last month warned that there was only a ‘dozen’ years left for concrete action on climate change.

The report’s authors said that failure to act would worsen the risk of droughts, famines, floods and fires for millions of people.