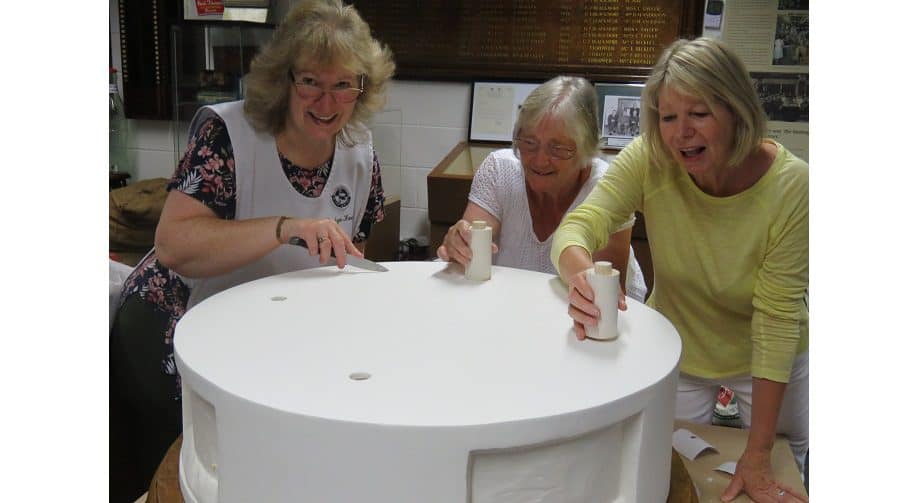 A reconstruction of one of the Queen’s wedding cakes has returned to its original home in Bermondsey’s Peek Frean Biscuit Factory to be completed, after being vandalised by squatters two years ago.

The original six-tier cake was created by the Bermondsey firm for Princess Elizabeth’s marriage to Prince Philip in 1947.

A full-size, 6ft replica was displayed in the reception of Peek Frean’s factory and remained there until the factory closed in 1989. The cake was then moved to the Pumphouse Museum in Rotherhithe as part of a permanent exhibition about the company.

Pieces of the original vandalised cake

But in 2010 the Peak Frean Museum was forced to leave the building when its funding was cut. The 600lb cake was too large and delicate to move so was left in the empty building. Then in July 2015 squatters gained access to the Pumphouse and vandalised the cake, turning it upside down and splattering it with red paint.

But now the slice of local history is being reconstructed by members of the British Sugarcraft Guild. The Guild was drafted in to help recreate the replica in August 2015 and secured sponsorship from a number of organisations to fund the project, including the University of Warwick. The University used 3D scanning technology on the surviving parts of the cake to produce moulds to recreate the intricate designs. This even involved a trip to Buckingham Palace to scan the centrepiece, a silver model of St George and the Dragon, which was given to the royal couple as a souvenir.

The different tiers were then distributed across the country last autumn to be reconstructed out of royal icing and sugar paste. The bottom tier has now returned to the Biscuit Factory – now a business park – on Drummond Road, where the original cake was made, to be completed.

The team aims to have the cake restored in time for the Queen’s 70th wedding anniversary in November, when it will be displayed in the Peek Frean Museum, now housed in the former Biscuit Factory. Gary Magold, co-founder of the Peek Frean Museum, said: “When I saw the cake after it had been vandalised it was a complete and utter wreck. At first I thought we might be able to restore it but the damage was too bad.

“The Sugarcraft Guild have worked solidly for the last year from getting sponsorship for working on the cake to restore it to its former glory.”

A cake fit for a queen

Peek Frean & Co baked and iced a six-layer wedding cake for the marriage.

The caked weighed six hundred pounds, stood six feet tall and at the top stood a silver model of St George and the Dragon. This was given to the royal couple as a souvenir.

The original cake was taken to Buckingham Palace in a specially modified car, and driven at walking speed to avoid any damage.

The life-size model of the cake was displayed in the reception of Peek Freans’.