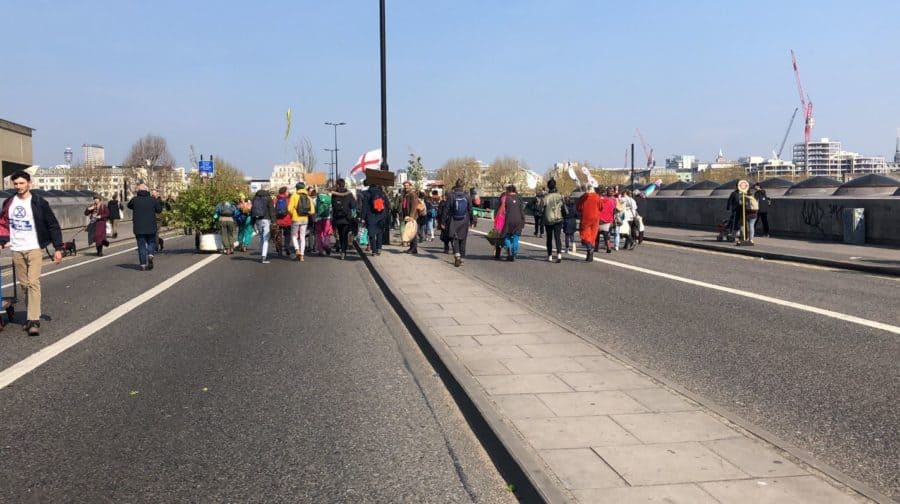 Extinction Rebellion have been barred by police from continuing their protests in London.

The green activist group must no longer assemble anywhere within the capital as of 9pm last night, said Scotland Yard, or face arrest and prosecution.

The condition only applies to its ‘Autumn Uprising’.

The extraordinary condition comes after protesters staged action in the City of London last night, including temporarily blockading London Bridge, as part of its Autumn Uprising.

Action has been ongoing in the capital since the announcement of an ‘International Rebellion’ on October 7.

The group had previously staged blockades of London’s bridges, including Waterloo Bridge.

“Today, an unprecedented, political, decision has been taken to shut down peaceful protest calling out the government for inaction in the face of crisis.”

#ExtinctionRebellion break the law in careful & deliberate ways, fully understanding the consequences of action being taken.

Today, an unprecedented, political, decision has been taken to shut down peaceful protest calling out the government for inaction in the face of crisis. pic.twitter.com/H9UbAnl5Ua

As of last night, more than 1,400 people connected to the latest round of protest had been arrested by Scotland Yard for offences.

A number of them have been subsequently charged, including locals from Southwark and Lewisham. “These conditions have been imposed due to the continued breaches of the section 14 condition previously implemented, and ongoing serious disruption to the community,” said the Met’s Deputy Assistant Commissioner Laurence Taylor.

“We have made significant progress in managing Extinction Rebellion’s activity at sites across central London over this past week.

“The policing operation continues, and we will continue to take action against anyone engaged in unlawful protests at locations targeted by Extinction Rebellion.”

The Met said added that it would discuss proposals for lawful protest in the capital with Extinction Rebellion or any other group if approached.

However, Mayor Sadiq Khan said on Tuesday morning that he was seeking “further information” from senior Met officers about their decision, adding “the right to lawful and peaceful protest must always be upheld.”

“However, illegal action by some protesters over the past eight days has already put undue pressure on already overstretched police officers, and demonstrators should bare this in mind when considering any further actions,” he said.

In a national statement, Extinction Rebellion said it would ‘let Trafalgar square go’ in response to the development.

However it added: “The Climate and Ecological Emergency isn’t going away and we remain resolute in facing it.

“We urge the Government and the authorities to join us in doing the same. We cannot do it alone.

“This is bigger than all of us.”

Extinction Rebellion calls for the government enact legally binding policies to go carbon neutral by 2025 and to establish a ‘Citizen’s Assembly’ to deal with the climate change emergency.