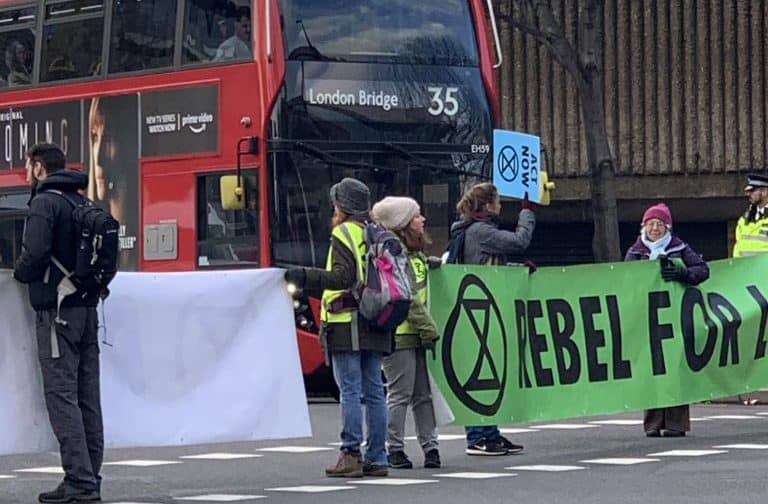 Activists from Extinction Rebellion held the ‘Rebellion Day 2’ in the form of a funeral march at Parliament Square to “mourn all the life we’ve lost, are losing and are still to lose.”

An estimated one thousand protesters turned up dressed in black to ‘mourn’ the species lost due to climate change.

The group also held planning meetings this week in London to discuss what further disruption should take place, but has warned of proposed mass action on April 15.

The action came on top of a run of traffic disruption at Elephant and Castle roundabout causing severe delays to commuters at rush hour last week.

Protesters stood at the junction of Elephant and Castle roundabout blockading morning traffic on Wednesday, Thursday and Friday to raise awareness over climate change.

The move was slammed by some commuters, who said the protest made them late for work or hospital appointments.

One said: “You made my son late for school and lots of people late for work! Are we supposed to thank you for that? All you’re doing is p***ing the British public off.”

Another said they had to cancel their brain scan as a result of the traffic, saying: “Protest in an area that’s not a major area where people need to get to work or hospital in my case.

“I had to cancel my EEG appointment because we were stuck by Old Kent Road fly-over for over an hour.”

The group shot into the headlines earlier this month when they blockaded many of London’s major bridges, including Southwark, Tower, Lambeth and Blackfriars.