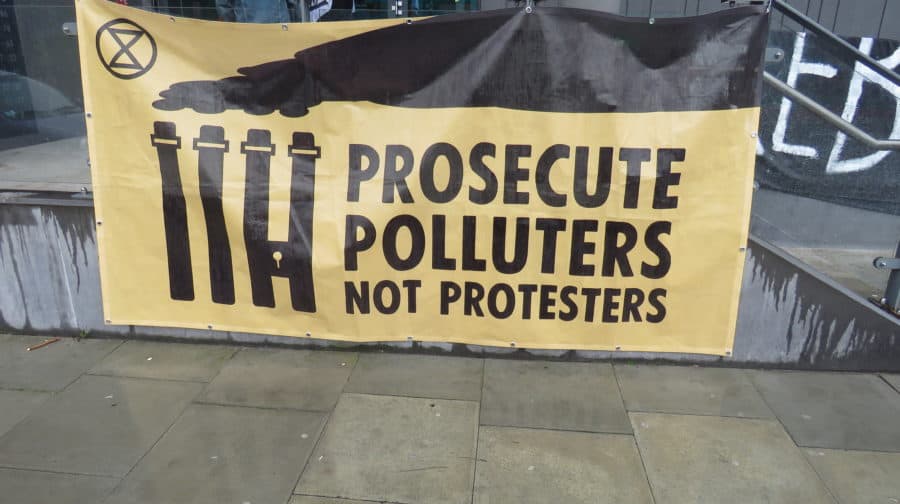 Around forty Extinction Rebellion protesters joined a group of Bermondsey mums in a protest against the Thames Super Sewer project on Friday afternoon.

Mums living next to Tideway’s Chambers Wharf worksite were prompted to organise the demo in a row over compensation paid to those living facing the worksite – but not those facing away.

Extinction Rebellion activists also demonstrated at the site in a show of solidarity, and in concern at the environmental impact that lorries and dust caused by the concrete pour would cause.

The continuous pour was needed to reinforce the underground structures of the site.

Mother-of-four, Heather Mulkerrins, who helped organise the demo, said: “Those that face the site are being given respite to take their children away while this kind of work is going on, but those who face opposite it are being told we’re not even affected.

“My place is facing the other side, I’ve got four children, three of them with respiratory problems. It’s about all of us being given the same treatment, that’s what today’s all about.” Despite the pouring rain, Ms Mulkerrins and around fifteen other local residents had been out on the streets since before 8am.

Ms Mulkerrins was not alone in anger over the lack of respite while the 36-hour pour was ongoing.

Fellow mother and Chambers Street Resident, Mary Akineele, told the News that dust from the work-site had caused her and her nine-year-old son, Michael, to need inhalers – but still they will not receive respite from Tideway as their flat does not face the site.

“They say it’s because I don’t have any health issues,” she said.

“But still they keep telling me, ‘no you’re not entitled.’

“There is only one entrance, so how can they say it’s not going to affect us? It’s the same Chambers Street, so I don’t know why they’re saying we’re not affected.” Protestors said up to 200 lorries came through Chambers Street in Bermondsey during the pour, creating pollution

Tideway, which is carrying out the major construction project, said in a statement earlier last week that an ‘Independent Compensation Panel’ decided on mitigation and respite claims by residents.

“The panel is formed of independent experts ranging from health professionals to noise specialists, and each decision is based on an individual’s circumstances – including proximity of their home to the site, health and other personal circumstances,” said a Tideway spokesman.

The panel could not comment on individual cases like that of Ms Mulkerrins or Ms Akineele, he said.

One activist who came from Extinction Rebellion in protest against the environmental impact of the major £4.2billion project was Michael, a 19-year-old politics student at the University of Exeter.

“We’re here in solidarity with a group of mums and their children that live close by to the Super Sewer here,” he said.

“There’s ways to get around this. It’s not necessary at all, to stop the run-off water getting into the sewage which then overflows it.

“In Philadelphia and New York, they’re stopping the overflow getting into the sewer and they’re not building pointless infrastructure like this.” An Extinction Rebellion protester pictured at the scene

Ms Akineele had earlier joined with ER demonstrators in disrupting a concrete lorry, she said, despite the two van-loads of police officers who were watching nearby.

Yet there appeared to be some confusion over tactics among extinction rebellion activists – with demonstrators not blockading any of the five lorries that passed in a two hour period as they made their way into the worksite.

One mooted plan to park a car on the road to block lorries into the site sparked discussion among assembled activists, some in favour and some against.

But as the News left the scene at around 2pm, no clear decision had yet been made on how, or whether, to blockade the lorries from making their way into the site for the concrete pour.