“The more MPs we’ve got the more coverage we’ll get and the louder we can be... It’s not about stopping Brexit, it’s about questioning the Tory party at every single point, on every level, from the economy to schools, and making it really clear that they can’t get away with them.” 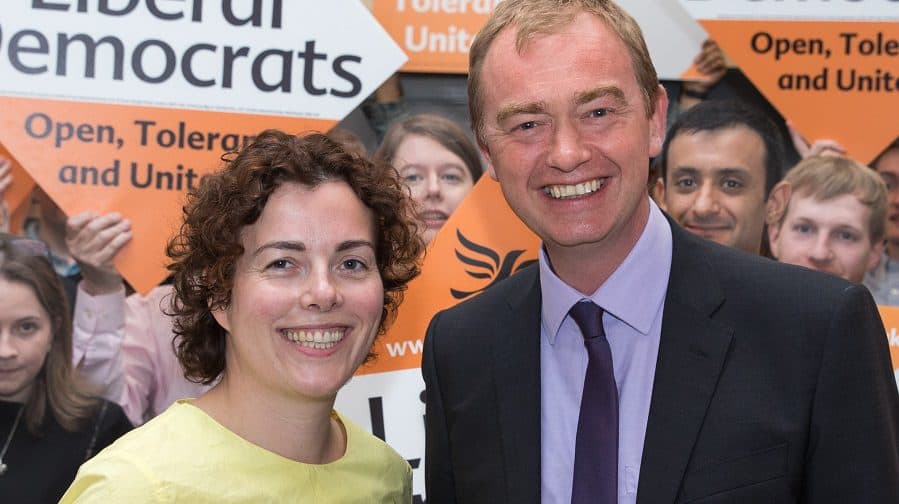 One of the big talking points of the 2015 election was the rise of the alternative parties. The SNP swallowed Scotland whole, and though UKIP and the Greens couldn’t secure more seats, between them they wrangled five million votes.

Fast forward to 2017, and (in England at least) it’s more like old times, with Labour and the Tories dominating the conversation.

So to bust their way back in on the conversation in Dulwich and West Norwood, the Liberal Democrats have selected Gail Kent, who works for Facebook as the company’s lead on global security policy, having worked for seventeen years at the National Crime Agency.

Gail says her party is again placing itself in the centre ground whilst steadfastly speaking up for those who voted remain last June – which ought to go down well in this constituency, one of the most remain-friendly places in Britain.

But voters could be forgiven for wondering: how much of a difference will it make to the issues of the day, if the Lib Dems end up with five or ten more MPs?

“The more Lib Dems you’ve got, the stronger an opposition you’ve got,” Gail says. “We’re in no doubt whatsoever that Labour has been no opposition to the Tories. They can’t make up their minds on so many issues, like do they want Corbyn or not, and their position on Brexit. The Lib Dems have been much clearer on a number of issues.”

But how will a dozen more Lib Dem MPs be able to change what happens to Brexit?

“I worked for the National Crime Agency, and looked a lot at organised crime… What you would often find is that cannabis is the seed commodity that starts someone’s career in organised crime.”

Gail says her party will do two things: argue against the government using debates and questions and persuading MPs from Labour and the Scottish National Party “to vote with us”. The second is “standing, jumping up and down, and shouting [for] people that voted for remain. The more MPs we’ve got the more coverage we’ll get and the louder we can be.”

You would hope that her first point “debating” would be taken as granted. But she adds: “It’s not about stopping Brexit, it’s about questioning the Tory party at every single point, on every level, from the economy to schools, and making it really clear that they can’t get away with them.”

But while Theresa May is on course to at least keep her majority, and quite possible double or triple it, I put it to Gail that it sounds like the Lib Dems are saying “vote for us and hopefully we can get Tory MPs to change their minds and occasionally rebel against Theresa May in Parliament”. Or that they are asking people to vote for them as a protest vote for staying in the EU, similar to how a vote for UKIP was once a protest for leaving the EU.

Rather more optimistically, Gail replies “it’s about having a conversation” and “working with the SNP, with Labour, and even the prime minister herself”.

She suggests people won’t just look at them as a protest vote, and will respect the Lib Dems for going into coalition with the Tories, when they had to make “very serious decisions” after the financial crisis.

And she adds that people are “wanting to know, what does a centrist party look like?”

“The Labour Party are looking back to the 1970s with Jeremy Corbyn.

“Theresa May is looking back to the 1950s where we all little England and waving flags and have kids going to grammar schools.

“People are looking for a party that’s reflecting the future and where we will be nationally and internationally; that’s positive, diverse and outward looking.”

While Gail happily defines the Lib Dems in this election as the centrist party, I’m not quite sure what policies her party has to offer that are uniquely Lib Dem, and will help them stand out between Labour and the Tories. Because the last time her party tried to “anchor themselves” between Labour the Tories (to borrow a phrase from Nick Clegg) it was a bloodbath.

The first thing that springs to mind is her party’s pledge to regulate cannabis.

“I worked for the National Crime Agency, and looked a lot at organised crime,” she says. “What you would often find is that cannabis is the seed commodity that starts someone’s career in organised crime.”

She adds that a regulated cannabis market would add £1bn to the economy, and is needed to stop people using the more powerful strains of cannabis, i.e. skunk. And she compares UK drug policy to that of Portugal and America, where there is a more “mature” attitude towards researching its medicinal uses.

Gail says that education is another area where her party differs from Labour and Tories.

“We have always prioritised early-years, because it’s so important to understand that a child’s development starts the moment they’re born.

“If you’re four years old and a black boy, then you’re already being stereotyped as more aggressive. If you’re a seven-year-old girl you’re already being fed messages about what you can and cannot do in life. Generally your outlook in life starts at that age. That’s why we have to prioritise early-years education.

“It’s not just about stopping the cuts and scrapping free school lunches [both widely expected to happen under the Conservatives]. It’s also about increasing the pupil premium – something we did in coalition.”

She adds: “With the Conservatives you’re seeing slash and burn. With Labour you have more of an emphasis on university fees”. Though I imagine a Labour supporter would jump on that comment with their pledge to offer free school meals to primary schools nationally.

On health and social care, Gail boasts that her party helped push mental health higher up the national agenda. And rather than offer a solution for fixing the NHS, her party suggests taking its future out of politicians’ hands and “having a review” involving all stake holder groups, patients, academics and experts, and working out what the country’s view should be, while “acknowledging we’re in completely different times, with an older population”.

It’s not as radical as pledges to nationalise the railway lines and cap executives’ salary. Nor is it rushing off with the Tories’ never ending quest to “eliminate the deficit”.

Perhaps not for the first time in the Lib Dems’ history, success may depend on how much people want to give the two major parties the middle finger, and pick the underdogs.