The Underdog, on Crucifix Lane, was the first to trial the A.I. Bar, which scans the faces of those waiting to tell bar staff who is next in line 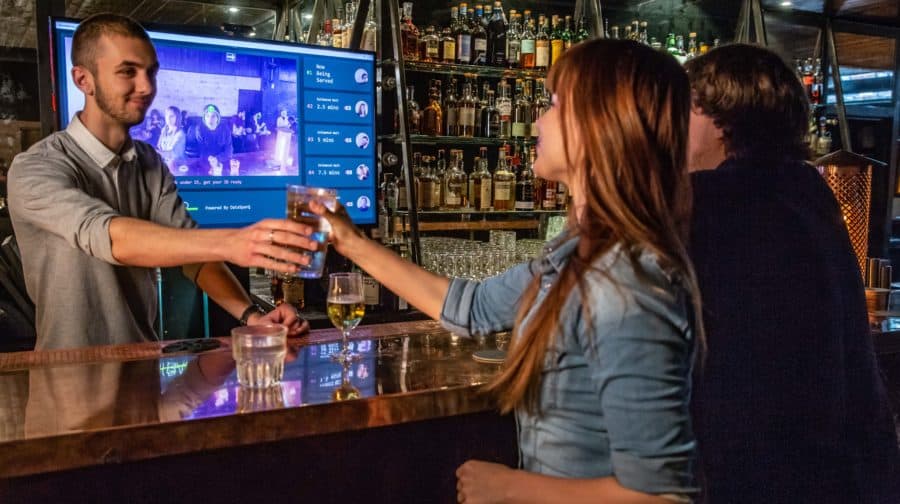 A Bermondsey bar has become the world’s first to use facial recognition technology to make sure punters can’t skip queues when waiting for a pint.

The Underdog, on Crucifix Lane, was the first to trial the A.I. Bar, which scans the faces of those waiting to tell bar staff who is next in line for their order on October 8.

The tech, developed by firm DataSparQ, also lets thirsty punters know how long it will take them to be served via a display screen. “We’re excited to be the first place in the world to have an A.I. powered bar,” said Sammy Forway, owner of The Underdog.

“We got a great response when we trialled it, everyone knew who was next and exactly how long they had to wait to get served.

“Being able to give customers this queuing clarity is really going to help with our events during the busy Christmas party season, saving a lot of hassle for my staff and our drinkers.”

The brains behind the queuing system also say the tech helps with ID – as it scans the faces of punters and lets bar staff know in advance if they look under 25.

Also being developed is a ‘Face Tab’ feature, which would let customers link a bar tab to their face, so that no-one could put orders on their tab.

The Underdog hopes to use the tech at peak times, but under privacy law they must currently obtain consent from everyone inside the bar when it is being used.

However, privacy campaigners have lambasted what they call the use of repressive technology for a ‘gimmick’.

“The problem is that it normalises quite dangerous surveillance techniques … it’s quite privacy intrusive,” said Silkie Carlo, director of Big Brother Watch, a privacy lobby group.

“It’s not solving a problem that desperately needed solving.” Powered by machine learning technology, the system works by displaying a live video of everyone queuing on a screen above the bar.

A number appears above each customer’s head, which represents their place in the queue.

Customers look up at the display to see where they are in the queue and how long the system estimates it will take until they get served.

Bar staff are then told who’s next. Staff also have an iPad or Android tablet which tells them who to serve next and if they should ask the customer for I.D.