FALLEN HERO LEE O’CALLAGHAN TO GET ROAD NAMED AFTER HIM 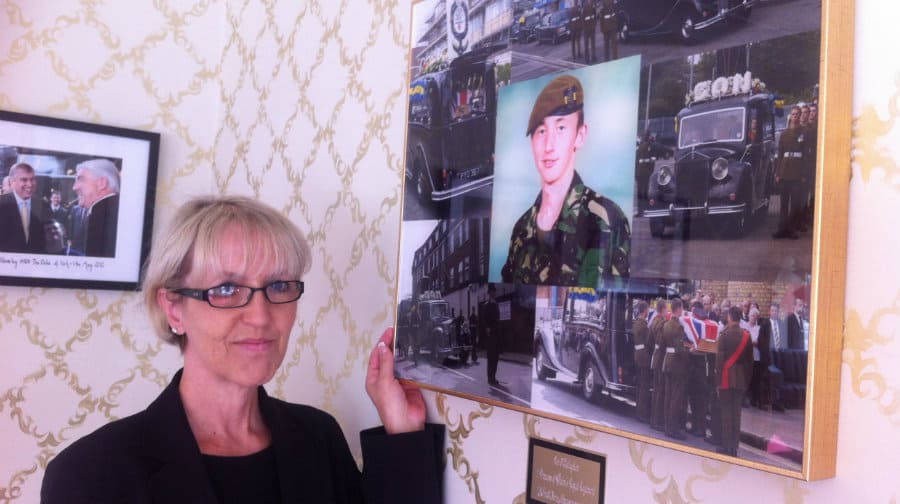 The mother of a fallen war hero said a new road named after her brave boy will be a fitting tribute to his memory.

Two Millwall fans campaigned with the News to get Private Lee O’Callaghan’s name included in the new Elephant Park development as a testament to the Walworth-born hero, who was one of the first British troops to die in the line of duty in Iraq in 2004.

Developer, Lend Lease, has confirmed exclusively to the News this week that O’Callaghan Way will be one of four new road names in the borough.

It is more than ten years since Lee was killed in action but the ‘Millwall through and through’ soldier will not be forgotten thanks to fellow fans, Lee Evans and John Davies, who campaigned to make sure future generations remember him nearby where he grew up on the Heygate estate.

Lee was serving in the 1st Battalion, the Princess of Wales Regiment when he was shot in the chest by a Shia militiaman in Basra on August 9. He was the 62nd British soldier to be killed in the Iraq war and the fourteenth to die after the war was declared over.

The young soldier had called home a few days earlier to speak to his dad, Eugene, on his birthday and the whole family was looking forward to him coming home on leave the following week. Instead, they got a visit from two army officers saying Lee had given his life helping his comrades to safety after two Land Rovers were destroyed by rockets. Lee’s name was put forward with more than 130 other suggestions from local people to name new streets and blocks in the borough over the next fifteen years.

O’Callaghan Way was chosen alongside three historic street names which featured around the Elephant hundreds of years ago. Sayer Street, Eider Street and Bodley Way will all run along the same orientation as their original namesakes.

Lee’s mum, Shirley O’Callaghan, said she had been “overwhelmed” by the support the campaign has had to name a road after Lee. “It’s a fitting and lasting tribute to my brave son,” she said.

Rob Heasman, Lendlease’s Project Director at Elephant & Castle, said: “Paying tribute to individuals who have such significance to the local community such as Private Lee O’ Callaghan and bringing back road names of historical importance to the area is exactly why we wanted the community to put forward name suggestions.”

Cllr Mark Williams, Southwark’s cabinet member for regeneration and new homes at Southwark Council agreed saying: “It is great to see the history and future of the Elephant come together in this way. In particular, to honour a local man and former Heygate resident who gave his life in the service of our country with this lasting tribute.”