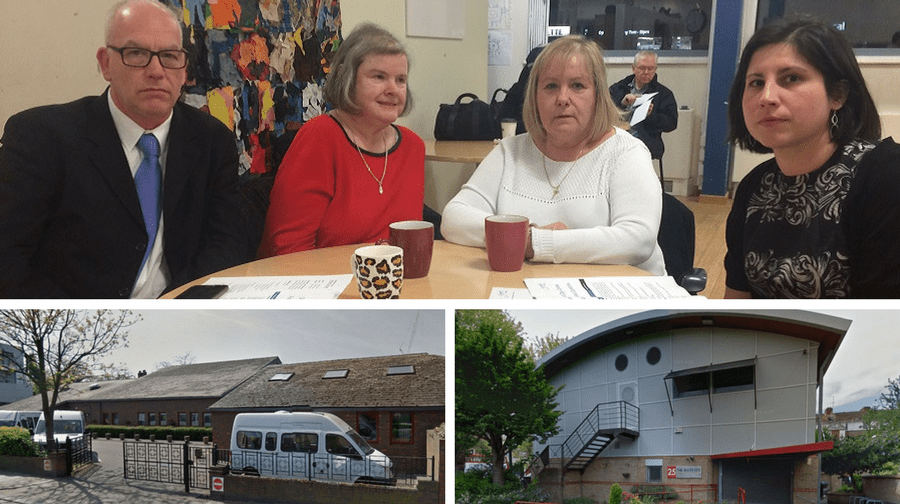 Adults with learning disabilities and their families have been left devastated after learning two day centres in Southwark could close.

Riverside Day Centre, in Cherry Garden Street, Bermondsey, and Queen’s Road Day Centre, in Peckham, may both have to find new homes as their leases have run out.

The centres are both run by the Camden Society, a registered charity, which has leased the buildings rent-free from the council since it was agreed the properties needed renovation work.

One hundred and sixty adults with learning disabilities use the centres, which provide activities and vital social interaction for some users who would otherwise sit at home alone each day.

The lease on the Queen’s Road centre ended on January 31 and the council has deemed the building not fit for purpose.

The council has allowed the charity to continue to operate rent-free until June to allow for the assessments of its 48 users.

The charity’s lease on the Riverside centre will end in June and they will have until November to leave.

It would cost £60,000 a year to rent the Queen’s Road site and £105,000 to rent the Riverside site, Cllr Richard Livingstone, Southwark Council’s cabinet member for adult care and financial inclusion, told the News.

“In both cases the council agreed there was a lot of work to be done to those buildings and that the council would lease those rent-free for that period,” he said.

“I think the arrangement came to an end in January 2015 so effectively we’ve been in a situation with both buildings where that rent-free period has rolled on.

“That is an arrangement that can only last a certain amount of time and nine years later it feels wrong to continue that extension. This is about us not being able to effectively subsidise people’s use of those places.

“It’s clear that the Camden Society would not be able to pay the going rate for those buildings and it’s difficult to see how people’s personal budgets could cover those costs.”

Cllr Livingstone said there were no firm plans for the future of the two sites – but revealed there were some “ideas” for Queen’s Road, and that Riverside could potentially be viable as a day centre.

Riverside was earmarked as a potential site for a housing development at a Sitematch bidders’ day in November last year – but Cllr Livingstone said this was no longer the case.

“The Camden Society say they think they could make a go of things at Riverside, so we will have another meeting about that to see whether we can find a way that Riverside can be viable in the future,” he said.

“I think there are some ideas potentially around Queen’s Road but they aren’t firmed up yet; in the case of Riverside there really aren’t any plans at all.”

Many service users and their relatives and carers were left feeling angry after learning the council had served notice on the leases, as they felt they had not been consulted properly.

Cllr Livingstone admitted that communication could have been better and timelier.

“I think we accept that probably some of the communication around this could have been better with centre users and some of the staff at the centres,” he said.

“I know in terms of Riverside we should have been having some of the conversations at an earlier stage.”

As part of the council’s bid to cut costs over the next year, plans to merge two council-run day centres into one were waved through at a budget meeting on February 22.

The council plans to save £537,000 by consolidating its day services in the borough into a single day centre.

A further £375,000 is expected to be saved by reassessing who is entitled to transport services.

“We run a centre for disabilities at Southwark Resource Centre at the Aylesbury Estate [Walworth] and also the Fred Francis Centre [Dulwich],” said Cllr Livingstone. “We would potentially merge those two centres.”

“We know this is difficult and that this sort of change can be unsettling for users and their families,” he said.

“We want to work constructively with the Camden Society to find the best outcomes for people and it’s worth noting that even after those changes we will remain one of the highest providers of funding for people with learning disabilities in the country and we are proud of that.”

Councillor Maria Linforth-Hall, Liberal Democrat spokesperson for adult social care, said: “Change can be distressing for many of us, but for people with learning difficulties it can be actively harmful.

“Severely disabled people will be shipped out and instead money-making developments shipped in.

“These day care centres are literally a lifeline.  Labour councillors need to understand that adults with learning disabilities are human beings, not names on paper to be shuttled round the borough to places which are only convenient for the council.”

Denise Largin, Camden Society chief executive, said: “We understand that the council needs to save money but we hope we can get them to review their plans in order to best protect our services for the 160 people with a learning disability who use them at Queen’s Road and the Riverside.

“Our 55 experienced and skilled staff know the people we support – many of them with complex needs – and their families very well and we want to be able to continue to support them as we do now.

“We are looking for premises in Southwark to do this from. Any help anyone, including the council, can give us on this would be very welcome.”

‘There’s nowhere else Kathy can go’

Jeanette Hyde’s 60-year-old sister Kathy, who regularly visits Riverside, is deaf and has the mental age of a six-year-old.

She feels as though there was no consultation with service users and their families before notice was served on the Camden Society’s lease.

“It’s a bit like bolting the stable door after the horse has bolted,” said Jeanette.

“There’s been no consultation with anyone before these plans were put in place: the first anybody knew about it was when the Camden Centre got a letter.

“When she left school at eighteen, Kathy was in the sole care of my mother for 32 years until she died nine years ago and Kathy came to live with my husband and me.

“I work full time so it’s been very hard taking Kathy on; it’s been a massive learning curve and it still is.

“Kathy couldn’t string a sentence together and she still finds it difficult to communicate with people and to get herself understood.

“All I’ve ever asked is that Kathy has five days a week at the centre so that I can work; this day centre does all sorts of activities and when she’s here I know she is safe and is being looked after.

“There’s nowhere else she can go.”

One man, who wished to remain anonymous, said his elderly mother was the sole carer for his sister who has Down Syndrome and that the day centre offered respite for them both.

“My sister is soon to be 38 but she has the mental age of a two-year-old and is non-communicable verbally,” he said.

“She has been using the centre for about four to five years but has known people here since she was two. It’s a very tight-knit community because they all went to the same schools and colleges.

“She gets to see her friends and has some form of contact with the outside world outside of her family, otherwise she would be sitting at home.

“She is very socially outgoing and a very open person but she needs to be in a trusted environment because she would go up to anyone and speak to them. Our mother is a full-time carer and she is in her 70s so the centre gives her a lot of respite too.”