The cemetery's land is level with their garden wall 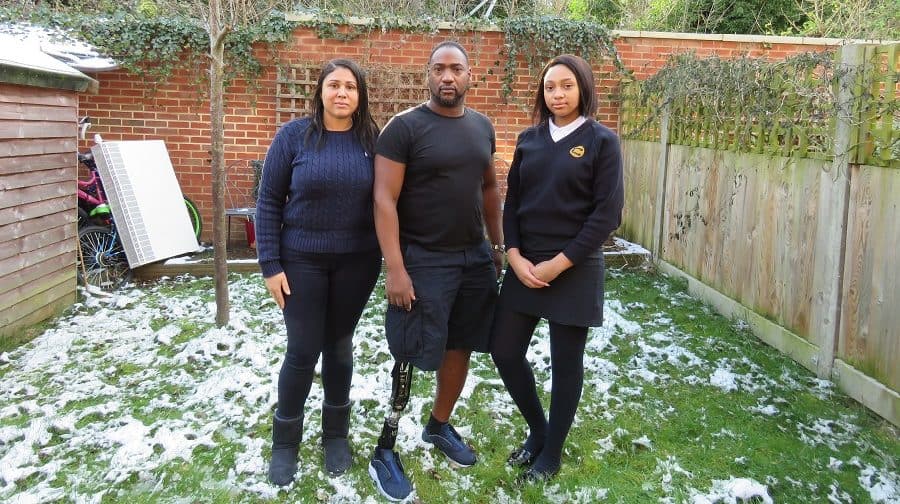 Syreeta, Ray and their daughter Camhi,

A disabled man and his family have said they are ‘living in fear’ after being targeted by burglars who can simply jump into their garden from Nunhead Cemetery.

Syreeta and Ray Davis, who live on Ivydale Road, were first burgled on September 30, 2016 when £25,000 worth of uninsured goods were stolen from their home, including £2,000 in cash, while they were on a family holiday celebrating Ms Davis’ 40th birthday.

Ms Davis says they even took her work uniform and tried to set fire to the house. The intruders appeared to have broken in using a crowbar on the back door.

At the beginning of March they were targeted again, when a silver Corolla bicycle was stolen from their garden on Friday, March 9.

CCTV footage shows the burglars walking from the undergrowth near the cemetery, which is level height with their garden wall, and jumping down into the garden, which is not protected by a fence.

The couple say that for a year-and-a-half they have made repeated requests for help upgrading their security from Family Mosaic, which owns and rents the property, but had to install CCTV themselves, costing £750.

The remnants of a much larger fence between their terraced home’s garden and the council-owned cemetery appears to be visible.

Now the couple, who are parents to three teenage children, are calling on Family Mosaic and the council to look at rebuilding the fence to protect them from being targeted in future.

Ms Davis, aged 41, says it took years for them to be re-housed in a property which met her partner’s needs.

Mr Davis’s lower right leg was amputated below the knee after a moped accident, eighteen years ago on Peckham Rye, which left him hospitalised for five months.

He now makes prosthetic limbs for other amputees at the Bowley Close rehabilitation centre in Crystal Palace, run by Guy’s and St Thomas’ NHS Trust, where he had received support after his accident. Their home in Nunhead includes a lift, and full wheelchair access, including lower sinks and other fittings.

Ms Davis, a Royal Mail worker, said: “Disabled properties are so hard to come by. This place is lovely and we love it, it just needs to be more secure. We are living in fear and after the burglary in 2016 my hair was falling out with stress.

“We can’t have a public cemetery at the same level as our back wall.”

A spokesperson for Family Mosaic and Peabody said: “We take the safety and security of our residents very seriously and are sorry to hear about this burglary.

“We are working with residents at Nunhead Lane to look at how we can improve the security of the rear wall and boundary with council land.

“We have visited the affected family, and are working with the local police to offer support. To help make the property more secure, we will install security lighting in the garden and are looking at ways we can raise the height of the boundary wall.”

Cllr Ian Wingfield, Southwark Council;s cabinet member for environment and the public realm, said: “I am sorry to learn about the theft of Ms Davis’ bike and hope the police have supported her and her landlord in further securing the property. The council’s team at Nunhead Cemetery works closely with the police Safer Neighbourhoods team, to maintain a safe space and protect the public and residents.

“We have invited them to meet with us and visit the area, to identify any action we could take to improve the security for residents bordering the perimeter of Nunhead Cemetery.”