Family of murdered Mohamed Dura-Ray, 16, lay flowers to mark three years on and call for witnesses to come forward 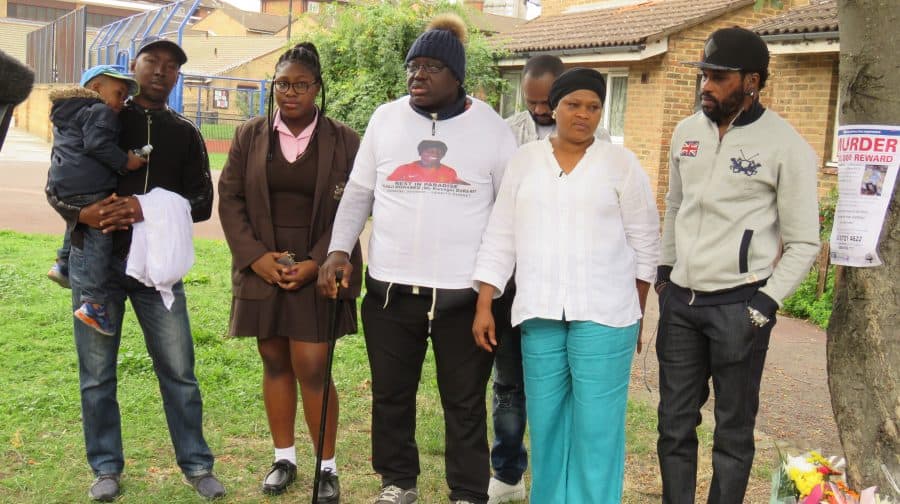 Family and friends of murdered teen Mohamed Dura-Ray laid flowers this morning on the spot where he was stabbed to death exactly three years ago.

They reissued an appeal for witnesses come forward and tell the police what they know about Mo’s murder – to finally put his killer behind bars.

The Aylesbury Estate teenager was only sixteen when he was stabbed to death shortly before his seventeenth birthday outside Canterbury Place on Walworth’s Newington Estate on September 14, 2015.

An inquest into the keen Man United fan’s death heard that Mo had been involved in an altercation with an unknown male before dying of a single stab wound to the chest at 10.52pm.

Despite a £20,000 police reward for information, and a sample of blood found on a letter at the scene which matched a suspect’s DNA, the case fell through when a witness refused to give evidence.

The coroner gave a verdict of unlawful killing – and Mo’s murderer is still at large.

Now three years on, Mo’s family and friends have urged witnesses to cooperate with the police so that justice is finally done.

Laying flowers in Canterbury Place this morning – where the teen died – mum Mariama Karama said: “I’m standing here, I’m mourning, crying for my son. But I can’t have him back again.

“There’s a number to call, even if you don’t give your name, as long you’re saying the truth, that’s all I’m pleading for.” The grieving mother spoke of her anger at falling police numbers as London has seen a surge of violent crime, and urged greater use of stop and search powers.

She said: “How many children have lost their lives? There is no help from this Government. They’re not helping us.

Friends of the murdered teen also urged witnesses to come forward to get justice for the sixteen-year-old, who had wanted to become an engineer.

Sam Dada, 22, said: “He was like a little brother to me. He was a happy kid, very funny, full of life, loved his friends and family.”

Sam, who had been friends with Mo for five years, urged witnesses to finally tell police everything they knew about the night of Mo’s death.

He said: “Do what you can. It’s resting on his mum’s chest. Help his mum more than anything.”

Following her speech, Mo’s mum told the News: “I loved my son so much and I miss him. I always come to give him the last respects.

“Mo was a very good boy, he was a bubbly boy.

“I’m sad. To bury your child, not your child bury you. I feel so much pain in my heart to bury my child.” Mariama also praised the work of Neil Coyle MP, who was in attendance, saying he was “like family to this community.”

The MP told the News: “It’s been three years since Mo was murdered here. Mariama his mum is still waiting for justice. That’s an unbearable impact on the family.

“There were so many people here on the evening that he was killed but we know that hardly any witnesses have come forward to give statements to the police.

“That really worries me because it means no-one has been held to account for the killing. Someone could be in prison now if more people come forward.”

The MP called for more funding for police officers and said schools should be more willing to invite knife-crime charities in to give talks. He said: “I highlighted in the Commons this week the fact that the Government has withheld £100 million from the Met – that would be 4,500 officers on the street now if they’d been given that funding.

“Some schools are reluctant to have charities involved in tacking in knife crime because they don’t want parents to worry they have a problem with knife crime. All schools should be doing it, it should be compulsory.

“The final strand is more opportunities to be involved in other activities – especially those who don’t have play areas in their own homes, or have families working to the bone.

“Things like boxing clubs, dance clubs, whatever it may be which give positive networks to young people.”

However he added that no-one should demonise Southwark’s “brilliant young people”, saying only a small minority turned to knife crime or violence.

Southwark NewsNewsFamily of murdered Mohamed Dura-Ray, 16, lay flowers to mark three years on and call for witnesses to come forward