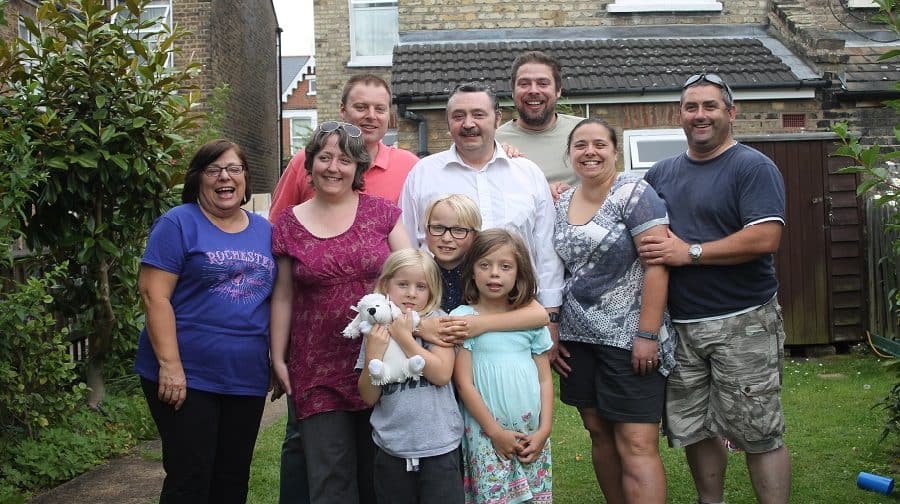 Dave, centre, surrounded by his family and his devoted wife Veronica, far left

Dave Alden, one of the architects of the historic Blue Plaque scheme and champion of heritage in Southwark, has died after a ‘long battle with cancer’.

Mr Alden, 66, was Chair of the Southwark Heritage Association for twenty years, and he and his wife Veronica were instrumental in setting up the Blue Plaque Scheme in partnership with the News and Southwark Council, to recognise the people, places and events that have made Southwark special throughout history.

The idea of setting up the scheme came about as the heritage association looked into why Southwark, London’s original borough, was so underrepresented in the usual blue plaque scheme run by English Heritage. Under that scheme the person must be dead and the building still standing. The former was not a problem, but so many of the borough’s buildings had been destroyed in WWII, and even more bulldozed by 1960s and ‘70s architects.

Since launching Southwark’s own Blue Plaque scheme in 2002 with the News and supported by Southwark Council – the borough now has in excess of fifty plaques from Sam Wannamaker at Shakespeare Globe, to Charlie Chaplin, Charles Dickens to living icons like Michael Caine. In keeping with Dave’s life-long commitment to engaging local people in our rich heritage, Southwark’s Blue Plaques are chosen by the people of Southwark and over the year tens of thousands of people have voted.

Southwark Heritage Association was formed in 1986  under the slogan, ‘Historic Southwark Alive Today’ at a time when the history of the borough was way down the list of importance for Southwark Council.

Since then the money generated in tourism has grown out of all recognition.

As a non-profit making charitable body Southwark Heritage Association, run by Dave and his wife Veronica has played a key role in raising the importance of history and tourism to the borough.

Last year another one of their other projects Southwark Young Pilgrim celebrated 20 years. The Dulwich based couple set the scheme up to give local school children training in the borough’s history and act as tour guides to visitors coming out of London Bridge Station. Securing the patronage of Rotherhithe-born film icon Sir Michael Caine the pilgrims is still going strong under the ethos ‘that which we inherit from the past, use and develop in the present and leave, enhanced, for our children’s future.’

His wife, Veronica, paid tribute to him, telling the News: “On Sunday the 17th of June 2018 a light went out in the Alden house.

“Dave lost his long battle against cancer, and passed away where he wanted to be at our home.  Dave was, I’m proud to say, my amazing husband and partner for over 40 years, and an amazing father and grandfather.

“He is sorely missed by all the family. We are and always have been a very close family and he is with us always in our hearts, thoughts and everything we do.

“Dave’s passions were his family, his garden, DIY, cooking, and Southwark.

“He was born and grew up in Peckham, moved to Dulwich and had lived here ever since, a true Southwark boy.

“He always saw opportunities to learn new things, a philosophy of lifelong learning that he has passed on to his kids, always encouraging us whenever we showed an interest in anything but never trying to impose his own interests.

“Whenever I pick up a power-tool, a cooking implement or visit a museum I know he’ll be with me… and in the case of the first two, probably whispering how I should be doing it.”

Over the years, he had built up a large picture library, chronicling the changes that had taken place in Southwark.

Mr Alden worked tirelessly to save threatened historic buildings, including the Concrete House in Dulwich and St Giles Porch in Camberwell.

In his commitment to the borough, he also held roles on the Chamber of commerce, The Pool of London Partnership, String of Pearls and in 1996 the first Southwark Pageant, depicting London through the ages.  The popular event was always well attended and ran for several seasons. Chaucer’s Canterbury Pilgrims on horseback in their colourful costumes, was the focal point of the procession, followed by an army of medieval knights, Paladins and their ladies, accompanied by court musicians, jesters, jugglers, and a performing bear.

In recognition of his tireless work over the years Dave Alden has received the Liberty of Camberwell, a civic award, and had been presented to the Queen, the Duke of Edinburgh and other members of the Royal Family at Buckingham Palace.

Details of his funeral are yet to be announced.