The incidents have been going on since June last year 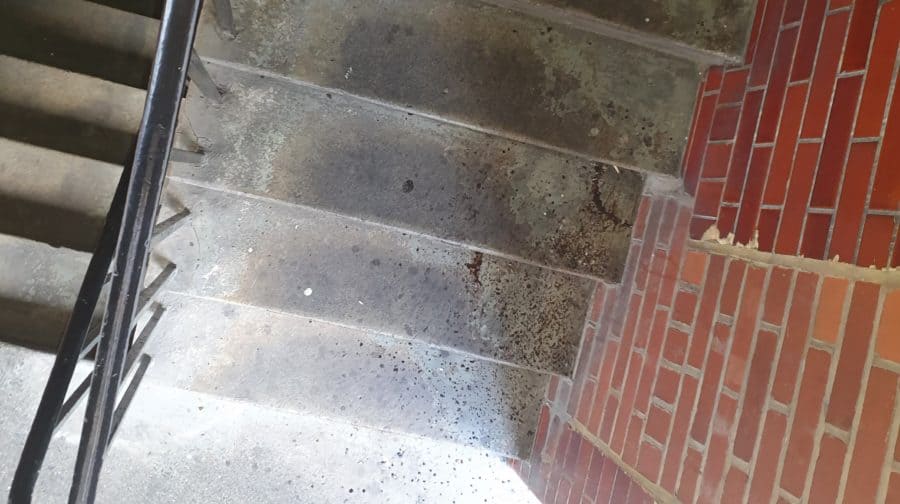 A young family in a Bermondsey estate are in despair after finding human faeces on the stairwell outside their flat “countless times”, Kit Heren writes…

Murshed Ahmed and his wife Fateha Begum have contacted Southwark Council several times for help with the repeated pooing on the Neckinger estate near busy Abbey Street, but the local authority have been unable to make a difference.

“Urine is one thing – but someone opening their backside on the staircase is disgusting,” Ahmed told the News.

The couple, who live with two young children on the estate, said they first contacted the council in June 2020, but to no avail.

“It’s only two weeks ago when it happened again that I just couldn’t handle it any more, I thought ‘this is ridiculous’,” Ahmed added.

Ahmed and Begum said they told the council that they would pay for security doors on the staircase to deter the serial offenders, but authorities refused.

Council officers told the couple to go to the police, but Ahmed said they had not made contact. “They’ve got so much on and are so stressed,” he said. “I really don’t think there’s much they could do.”

Remnants of the latest poo are still on the staircase, Ahmed told the News. “The cleaners came in and half cleaned it, but it’s still there. All they did is scoop up the big part and leave the rest. It’s really nasty. The smell is awful. I don’t blame the cleaners to be honest, I feel bad for them.”

The pooing is having a serious impact on the family’s life, Ahmed added. ”Every time we come downstairs I have to lift my children over the mess. If I’m not at home, my wife can’t go out because she can’t carry both of them over it.”

Southwark Council expressed sympathy for the “disgusting” problem faced by the family.

Councillor Stephanie Cryan, Southwark cabinet member for council housing, said: “I’m sorry this family has had this happen to them, it is disgusting and I sympathise.

“Our cleaning teams are very quick to clean up when it is reported to us, but unfortunately we have to prioritise funding for antisocial behaviour measures such as security doors where we receive the most demand and complaints, as funding is limited.

“We will continue to listen and if the problem becomes worse or we receive more complaints, we will review the situation.

The problem too is Southwark Council is in total denial despite knowing and the poor cleaners I feel sorry for well as the residents as similar has happened my estate Silverlock, I’ve told Stephanie Cryan myself albeit waste of time that was and the Southwark News has done rough sleeping issue stories here also however bottom line it’s not lack of funds it’s lack of competence and shame these Council spokespersons didn’t admit it, many too of these anti social homeless or drug addicts known by name to LBS are ignored even when begging for help most born and bred Southwark just had bad luck along the way but still as human as us treated like scumbags so what they suppose to do or where they suppose to go and some been sleeping rough here using our stairwells etc as urinals, only young whole lives in front of them if someone cared years too. It’s disgusting for the residents and the culprits and LBS would prefer to ignore the issues hope they go away that’s our landlords and I’m glad this article raised it again