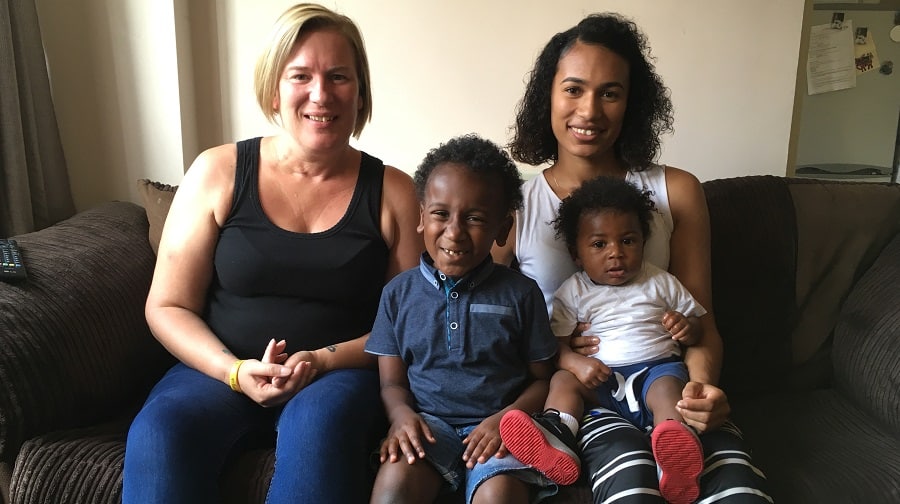 The family of Bermondsey boy Cavell Neavin, who was diagnosed with brain cancer at the age of three, are hoping to raise awareness of childhood cancer

When three-year-old Cavell Neavin began complaining of headaches, his family never could have guessed it would turn out to be brain cancer.

The Bermondsey boy had been happy and healthy until he suddenly started to suffer with pain in his head and sickness around September 2014.

He complained of a stiff neck and couldn’t walk properly but when his family took him to the doctor, he was given antibiotics and sent home to rest.

However, on November 13, 2014, while his young mother Jade Usuanlele was sitting a midwifery exam at college, Cavell was rushed to A&E after his grandparents noticed his condition deteriorating.

A CT scan found fluid on his brain and a biopsy revealed the three-year-old had pineoblastoma – a form of cancer.

“I was sitting an exam and had so many texts and missed calls,” recalled Jade, now 25, who also has a ten-month-old son.

“I thought maybe he’d had a fall; I never expected it to be something like that.

“My friend got through to me when I was on the bus and told me.

“I got back to my grandparents’ and when I saw my Grandad I knew something was wrong because he doesn’t worry.

“When I got to the hospital Cavell was just lifeless; I was really scared.”

Cavell, now six, had chemotherapy and was in and out of hospital for treatment over the course of the following year.

Doctors told Jade her young son wouldn’t still be here today if he had been taken to hospital just a day later but thankfully, on December 16, 2015, he was given the all clear.

The youngster suffered from some side effects because of the cancer, such as sight loss caused by his eyes being fixed downwards, but he is now thriving at primary school and is determined to make up for lost time.

“He is still trying to catch up at school and with his strength and he has a bit of hearing loss but his sight has returned,” said Jade.

“He had to learn to walk again and the doctors said he could have problems for the rest of his life.

“They said in his teenage years we will really be able to tell because he might struggle to catch up.”

Jade said Cavell will have MRI scans until he is fourteen – and that his family will always worry the cancer could return.

The 25-year-old said there had been no history of childhood cancer in her family – and that it isn’t as rare as people think.

For this reason, Jade and her mother Sharon Withers, 46, are asking residents and businesses across Southwark and beyond to take part in Glow Gold September as part of childhood cancer awareness month.

All they are asking is for buildings to be lit up in gold, something gold to be put on display in windows, for people to wear gold ribbons, or for gold ribbons to be attached to car aerials.

The mother and daughter are also hoping to hold a fundraising event in the near future to buy portable DVD players for children suffering from the same sight loss as Cavell did, which means they can’t look up at hospital TV screens.

Anyone who wants to get involved is asked to contact Sharon by emailing sharonw917@aol.com