The bench has pride of place at the Den 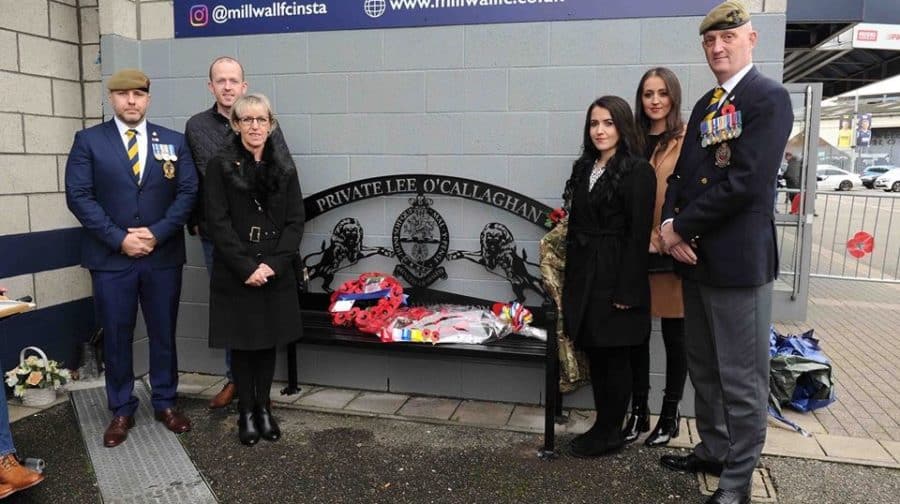 The family of a soldier who died in the Iraq war have shared their heartfelt thanks to the Millwall community after a commemorative bench was installed at the Den in his memory.

Private Lee O’Callaghan was 20-years-old when he was killed in combat in Basrah, in 2004. Lee had been on duty for five months and had only a week left before he was due to fly home and be reunited with his family.

August 2019 marked the fifteenth anniversary of the Walworth soldier’s death.  As the News reported last week, Lee’s friends Lee Evans and John Davies decided to club together and raise funds for a new memorial bench, and asked Millwall if they could place it at Lee’s favourite club.

The pair had already succeeded in having a road named after him in the redeveloped Heygate Estate near the family home – O’Callaghan Way. But, as Lee was such a huge Millwall fan, they always wanted to do something special for him at the Den.

More than £2,000 of donations poured in from the community and, with support from Millwall sponsor Huski chocolate, they were able to pay for the bespoke Belfast-made tribute.

Lee’s younger brother, Danny, who was sixteen when he lost his brother, told the News they had initially expected a wooden bench with a memorial plaque, so it was a “huge surprise” to see the final piece, which has been placed in front of the Barry Kitchener Stand. The design, created by GD Steel, has the inscription “once a lion always a lion” with two Millwall lions next to the Cap Badge of the Princess of Wales Royal Regiment.

Danny, who works at funeral directors Albin’s with mum Shirley, said it was particularly special to see how many people still remembered his brother, whom he remembers as “a kid from the Old Kent Road and Walworth Road. Friendly, happy, a cheeky fellow – willing to help anyone. We just wanted to say thank to you everyone, we really appreciate what everyone has done for my brother,” he told the News.

“My mum was really overwhelmed, this is the fifteenth anniversary of his death, and the fact that people are still thinking of him, she is so overwhelmed and absolutely grateful. It was very emotional as servicemen had come especially, too.

“Mum wanted to thank everyone who remembers him, year after year.” The bench, with tributes