Little Bermondsey's parents have described their newborn's fame as "mental." 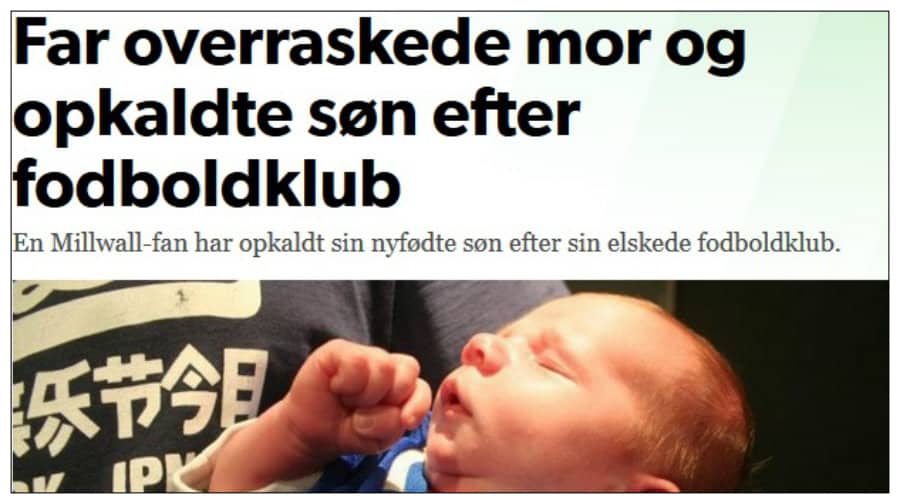 The mum and dad of one-month-old Bermondsey Millwall Den Bloomfield have described reaction to the naming of their boy as ‘mental’ after the news made headlines around the world.

Last week, the News revealed that Croydon resident Mike Bloomfield had named his baby boy after his hometown, the Lions and their stadium – without telling his wife.

Since then, his story has spread across the world, with media outlets as far away as America and Australia covering the story and clamouring for a comment from the 58-year-old Millwall fan and his wife.

The BBC and TalkSport invited Mike in for interviews, tabloids across Britain covered the story, and Fox Sports in the US discussed it in a quirky television segment.

The story on MailOnline

Jeff Stelling, of the Gillett Soccer Saturday show on Sky Sports, even gave little Bermondsey a shout-out while reporting on the Millwall match, while a number of Danish newspapers also got involved, covering the “stor Millwall-fan” (“big Millwall fan”) and his son.

At one point, the name ‘Bermondsey Millwall Den’ even began trending on Twitter – a milestone that only occurs when a huge number of people are discussing the same subject across the site.

Mum Kellie, 38, who has since come around to her husband’s audacious naming decision, said that she never would have imagined the story would go so far.

She said: “It’s absolutely mental, it’s gone crazy. We’ve had radio stations and everything. It was just one call after another.

“I thought it would just be in the paper but it has gone international. It’s a good story and he’s made a name for himself already!”

Mike said that, at long last, the phone was finally calming down.

The season ticket holder said: “It’s starting to quieten down now, thank God. But it’s been mad. Kellie has a sister in Australia who rang because she saw the news there, and I have a friend in America who has got in touch. The next step is getting him down to a Millwall game!”

Metro’s take on the story

While the name Bermondsey Millwall Den may not be matched, he is not the first child to be named after the Lions.

After reading about the story online, Paul Burrows, who lives in Blackpool, ran the News to tell his own story.

He said: “It’s a great story, but the dad is twelve years behind the times! I named my son Millwall Burrows. He’s had no trouble at all regarding the name, but I did make him take boxing and kick-boxing lessons just in case.

“When people first heard the name they thought I was crazy, but he actually sticks out from the crowd now. If you got to any school yard and call ‘Jack!’, half the kids will turn around.”

But Paul’s story also comes with a warning to die-hard Lions fan Mike Bloomfield: even despite his name, Millwall Burrows has grown up to be a Manchester United fan.