It replaces an older version that was painted over earlier this year. 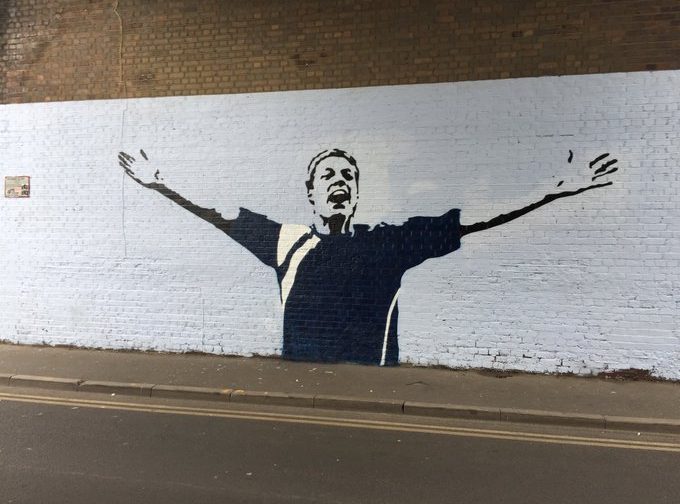 A mural of Millwall legend Neil Harris has been repainted on Zampa Road outside the Den after being painted over earlier this year, writes Kit Heren…

Fans were disappointed in April when railway maintenance teams covered up the mural of the former striker and manager, the club’s all-time top scorer with 138 goals in all competitions.

But after consultation with Network Rail, the club and the Millwall Supporters’ Club, the painting has been restored to the same railway arch – and is even bigger than before.

“But not just of my generation, there’s a lot of people in older generations that love Neil Harris as well, so we think it’s brilliant.”

We’re pleased to say that the iconic Neil Harris image has been restored to Zampa Rd.

Great working in partnership with @iamwizywig and his crew to bring the original artwork back and this time on a grander scale. #Millwall pic.twitter.com/0UjsJx005e

As manager, Harris took Millwall up to the Championship in 2017 via the play-offs. Millwall also reached the FA Cup quarter-final the same season.

Mr Avery added: “He’s probably, depending on who you speak to, one of the most important people that’s ever been at the club due to him scoring so many goals and being such a fantastic manager – so we’re absolutely over the moon.”

The old mural didn’t take up the entire railway arch, and other people added their own street art next to the painting – which some Millwall fans didn’t approve of, Mr Avery said.

But the new version, painted by artist Wizywig, stretches across the whole arch, so there is less room for competing artworks. Mr Avery said: “People used to see the white space as a kind of blank canvas for their own stuff. You know, people are entitled to do what they want but that was a mural for our player, so the fact that now it’s a lot bigger and there’s less wall to paint on, it’s a bit more protected.”

Mr Stanhope, who has worked on the Black Mirror and TV series and various films, painted a large lion next to the club’s name in another railway arch.